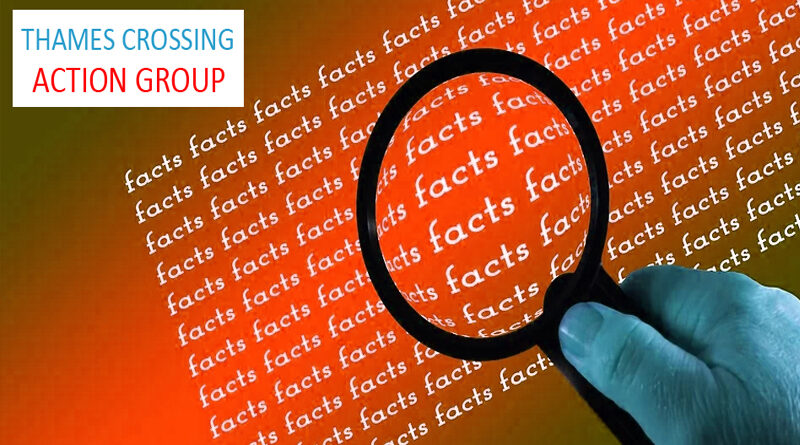 There are many, many reasons, and a lot of evidence as to why we are so strongly opposed to the proposed Lower Thames Crossing.  Click through on the links in this page to view the facts on the many different aspects.

The current estimated cost of the proposed Lower Thames Crossing is now up to £8.2bn of tax payers’ money. This latest rise in cost was announced in the Spring Budget 2020.  This makes it more expensive per mile than the highly controversial HS2.  If it were to go ahead the Construction impacts would be horrendous.

National Highways are not considering how traffic would migrate between the two crossings, if LTC goes ahead, when there are incidents and there aren’t adequate connections, which would result in more chaos, congestion and pollution.

With or without incidents there aren’t adequate connections, with various scenarios where traffic will need to use what is now known as the Stanford Detour.  There are built in bottlenecks in various locations.  And there are serious concerns about safety since the LTC would be built to ‘Smart’ Motorway standards, if it goes ahead.

The route does not make it viable for public transport or non-motorised users to use the LTC. It negatively impacts schools, and leisure.  To date NH have not taken traffic that would be generated from developing Local Plans or projects like the proposed London Resort (theme park) into account in the LTC traffic modelling. As the scheme would impact so many areas there have also been questions as to who should be entitled to Local Resident Discounts when it comes to User Charges.  Also of concern are the risks of flooding and impacts to flood plains that much of the proposed route passes through.

The LTC would create a toxic triangle,  The whole route fails against World Health Organization (WHO) standards for PM2.5 (tiny particulates like brake dust, tyre wear, road wear etc).  These particles are so tiny they can get into your bloodstream, and pose a serious risk to our health, as well as to nature.  Some people don’t seem to realise that Electric Vehicles emit PM2.5 too, just one reason why they are not the panacea that some suggest.

It would destroy homes, lives, health, greenbelt, woodlands (including ancient woodland), agricultural land (including grade 1 listed), solar farms, wildlife and habitats, countryside (including an Area of Outstanding Natural Beauty), the environment (over 7 million tonnes of carbon emissions), communities, and so much more.

In short, we believe that the facts show that the proposed Lower Thames crossing is simply not fit for purpose.

We will add links to more facts and info as they are added to the site, so do watch this space.