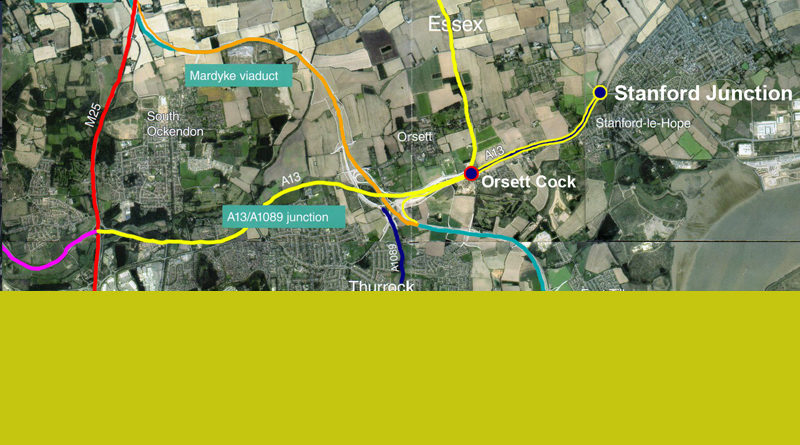 As we have explained previously, one of the problems of the proposed Lower Thames Crossing is the lack of adequate connections to the existing road network.  You may already be aware of the Stanford Detour issues.  We have highlighted this before.

During previous consultations we have flagged the issue of instances where traffic will be forced to detour to the Stanford junction on the A13.

The important thing to remember is that there no access to the proposed Lower Thames Crossing from the Orsett Cock junction. Although in the 2022 Local Refinement Consultation National Highways have added an Orsett Cock to A1089(south) connection.  That is purely for traffic that wants to reach the A1089 there would be no access to the LTC.

NB. For clarification for those who may not be aware, the A1089 south is the road from the A13 and leads to Tilbury Port, docks, London Cruise Terminal, Amazon, Asda, etc, and into Tilbury, so a very busy route.

So where do we stand on this topic with the current 2022 changes?

Despite the fact that NH have made the above change in regard to the connection for the A1089 south from the Orsett Cock, this change would cause its own issues and TCAG and Thurrock Council have our concerns over the impact that would still occur in regards to traffic still using the Stanford Detour, and other existing roads.

The council gave LTC Task Force members an update on this in the March 2022 meeting. Below is an image from the presentation by the council that highlights areas they are concerned would be impacted.  Part of this reason as well as some traffic still needing to use the Stanford Detour is because of the extra issues the new Orsett Cock to A1089 south connection would create. 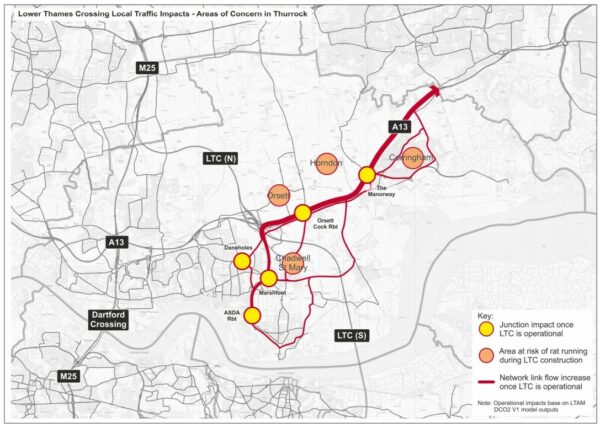 Let’s look at some of the scenarios under normal conditions

Traffic from the Orsett Cock or the A13 eastbound will not be able to access the LTC (in either direction).

There is also not any access from the A13 eastbound onto the LTC (in either direction), it would therefore have to travel all the way down to the Stanford Junction to go up around the traffic lighted roundabout and back on itself westbound along the A13 to the new LTC slip road to the west of the Orsett Cock junction (prior to where the Orsett Cock to A13 west joins the A13).

Lower Thames Crossing (north or southbound) to A1089 (southbound)

As the highlighted above whilst traffic may now generally use the Orsett Cock to A1089 south connection instead of going all the way down to the Stanford Junction, it wouldn’t take long until the Orsett Cock roundabout would see congestion and then traffic will as we know find alternative options.

Via the A13 eastbound

Again, traffic heading eastbound on the A13 cannot directly access the LTC either north or southbound.  So whenever there is an incident at or near the Dartford Crossing and traffic wants/needs to migrate to the LTC to cross the river it will not have direct access to it from the A13 heading eastbound.

Again, traffic heading eastbound on the A13 would have to detour all the way down to the Stanford Junction, up and around the traffic lighted roundabout, and then head back westbound along the A13 to the LTC junction just past where the Rectory Rd (Orsett) bridge crosses the A13.  Remember you cannot access the LTC from the Orsett Cock roundabout (see above).

As we have already mentioned traffic from the Orsett Cock roundabout, including A128 traffic cannot access the LTC.  Yet again it will need to detour eastbound along the A13 to the Stanford junction, up around the traffic lighted roundabout, and then head back westbound to the LTC junction just after passing underneath where the Rectory Rd (Orsett) bridge crosses the A13.

Just take a moment to consider how often there are incidents at the Dartford Crossing (heading south) and along the stretch of A282/M25 that leads up to the QE2 bridge.

Now consider that even if that traffic tries to migrate to the LTC via the LTC junction on the M25.  It will potentially mean 5 lanes of M25 traffic trying to get onto just 2 lanes of LTC southbound all the way to just past the A13.  You can read more about that built in bottleneck here – www.thamescrossingactiongroup.com/ltc-bottleneck-m25-a13-junctions/.

NB. Alternatively, traffic could also try cutting westbound along the A13/A127 etc from the M25 to the Blackwall Tunnel and/or through London to get across the river.  Also any time there is an incident traffic will in general rat run any possible route they can, as we already know only too well sadly. 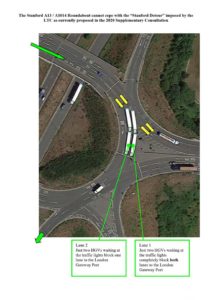 Thanks to Peter Woodard for sharing the image to the left with us, that clearly shows how just 2 HGVs stuck at a red traffic light on the Stanford junction roundabout block access to the Manorway down to the ports.

Imagine what it would be like with even more traffic, especially HGVs from the LTC, A128 that have to take the Stanford Detour.

Then imagine what it will be like when there is an incident at the Dartford Crossing or on the stretch of the M25 up to the LTC, and how traffic will migrate along the A13 eastbound, or via the A128 trying to get onto the LTC only to find they have to take the Stanford Detour.

Stanford Detour to be adopted by Highways England

The A13 between the M25 and the A1089 (Tilbury junction), and the A1089 down to Tilbury Port is currently managed and maintained by National Highways as part of the Strategic Road Network, as it is a trunk road due to the port.

National Highways and Thurrock Council are now discussing NH adopting the A13 from the A1089 down to the A1014 (Stanford junction) and Manorway down to DP World and London Gateway.

This means that the A13 widening and newly announced Manorway works that have been funded in part by the council and DPWLG will soon become NH’s responsibility.  Therefore if the LTC goes ahead the Stanford Detour route will all be NH managed and maintained roads.