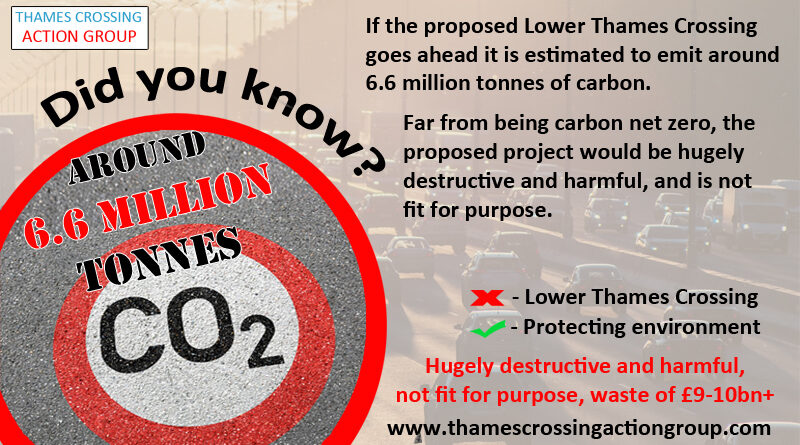 Our Government have committed to Net Zero, the Climate Change Committee have stated that “New roads should only be built if they can be shown not to increase emissions“.  So the latest carbon emission figures showing the proposed Lower Thames Crossing would emit around 6.6million tonnes of carbon is truly concerning.

The latest info can be found in Chapter 15 of the Environmental Statement (ES) which was released as part of the 2022 LTC Development Consent Order (DCO) application documents.

In Dec 2022 it was reported that a National Highways boss has said there won’t be a Lower Thames Crossing if they don’t resolve carbon issues.

It seems to us that National Highways have been attempting to hide, mislead, and greenwash the LTC carbon emissions over the years which is completely unacceptable.

They continue to claim LTC would be the greenest road every built in the UK, which again they have no evidence to back up, and they are attempting to put all the onus on to the contractors, rather than admitting new roads are destructive and harmful.

As the Climate Change Committee stated, “New roads should only be built if they can be shown not to increase emissions”, by this reckoning the estimate of 6.6 million tonnes of carbon clearly shows that the proposed LTC should not be built.

We have also seen no break down of the additional cost associated with ‘greener’ options of road building, but we know it would be considerable.  Plus it’s not just the financial cost that needs to be considered, but also the cost to our environment.  We need actions to back up all the talk, because unless we act now our  planet won’t be able to sustain a healthy future for anyone or anything.

On 18th July 2022 National Highways issued new claims about the carbon emissions of the proposed LTC being reduced by 80%.

Using the figures that were available at the time showed that far from a highly speculative 80% reduction in operational traffic emissions for the proposed LTC, there is actually evidence to show a whopping 67% increase in the estimated LTC operational traffic carbon emissions.  Yet another attempt by NH to try and put a spin on the realities of the proposed LTC with yet more greenwashing.

Whilst their claims use the 2016 carbon emission estimate of 5.98 million tonnes, their 2020 ‘6.3 Environmental Statement Appendices Appendix 15.1 Carbon and Energy Plan‘ which was part of their failed attempt to submit the LTC Development Consent Order (DCO) states that the total carbon emissions is estimated to be just over 5.27 million tonnes. (paragraph 1.1.3)

The same document states (paragraph 1.1.4) that 52% of the total emissions is from operational traffic.  This works out at 2.74 million tonnes.

Yet in the July 2022 NH press release the ‘Notes to Editors’ section details:

This highlights the huge 67% increase in operational traffic emissions alone.

Bold claims by both National Highways/LTC and contractor Balfour Beatty on reducing carbon have also faded under questioning, as exposed in Highways Magazine in Jan 2023.  Just another example of more greenwash on the LTC.

What are carbon emissions, and why are they important?

When people are discussing carbon emissions they are referring to Carbon Dioxide, CO2.  CO2 is released into the environment in many ways. This includes the CO2 we breathe out, as well as that from other animals and plants.  Nature does it bests to keep these emissions in balance. Trees and other plants for example absorb CO2. However, we humans are not as good at the balancing act as the rest of nature, and our actions are pushing things out of whack in the wrong direction.

Put in simple terms, CO2 is one of a number of greenhouse gases that absorbs radiation and prevents heat from escaping our atmosphere. When the heat can’t escape it increases and creates disruption to weather patterns and causes climate changes which result in negative outcomes to our lives, which long term will not end well for us.  This is why climate emergency has been declared around the world, and why it is so important that we take Carbon Emissions into account.

Some may deny Climate Change, but surely it is better to play it safe and worse case scenario we end up with a cleaner greener planet to live on?

Some history of the carbon emissions aspects of LTC

In June 2019, the UK became the first major country to legislate for a net-zero target for carbon emissions by 2050.

In June 2021 the Climate Change Committee stated in their report, New roads should only be built if they can be shown not to increase emissions. By that reckoning the proposed LTC, which is estimated would create over 7 million tonnes of carbon emissions, should not be built.

In Feb 2022 , due to changes in the way the government now calculates carbon emission costs, the proposed Lower Thames Crossing carbon costs for construction alone rose by more than 230% to almost £500million.  In an article in industry publication, New Civil Engineer, New Economics Foundation senior researcher has said “after factoring in the emissions over the scheme’s operational lifetime, the total climate cost is likely to rise over £1bn”.

In Dec 2022 it was reported that the Department for Transport(DfT) was refusing to share data behind the government’s Transport Decarbonisation Plan that had been requested by Professor Greg Marsden.  They were even appealing the Information Commissioner’s Office (ICO) decision that they had to release the information.

In January 2023 the DfT backed down, withdraw the appeal against the ICO decision, and released the requested data in Professor Marsden’s FOI request.