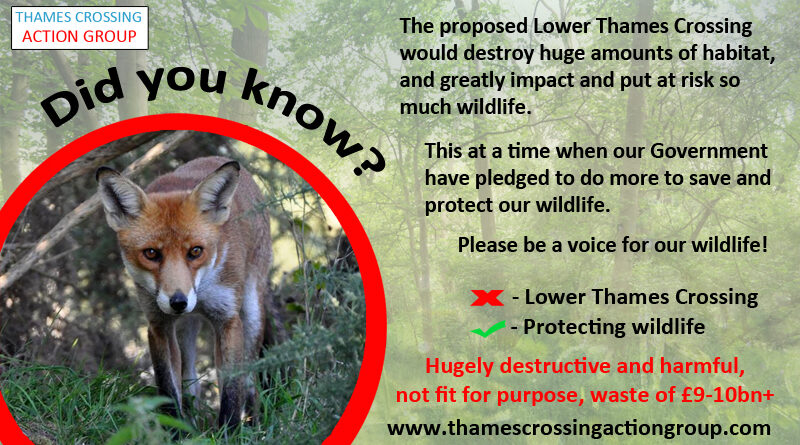 We all know the proposed Lower Thames Crossing would be hugely destructive, and that includes the negative impacts to wildlife and nature.

The Government’s Environmental Audit Committee (EAC) has published their ‘Biodiversity in the UK: bloom or bust?‘ report on 30th June 2021.

The report states that the Government are spending far more on destroying the environment than protecting it.  It also says that ‘toothless’ government policies are failing to halt the catastrophic loss of wildlife. The UK is the most nature depleted country out of all the G7 nations.

There was also comment about how The Treasury needs to move away from using GDP as the primary measure of economic activity, and include the costs to nature and biodiversity.  There is a Government petition relating to this, which can be found here if you wish to sign.

Another recommendation made by the EAC in this report is:

Tree planting should not occur on peat soils and floodplains would be better used for restoring floodplain meadows rather than afforestation projects.

Obviously the proposed LTC route would impact flood plains, so it will be interesting to look further into exactly what HE are proposing in regards to those flood plain areas and any planting etc.

In particular the two new ‘parks’ that HE are proposing since the Community Impacts Consultation (2021) One to the South of the River, Chalk Park, and the second to the north of the river, Tilbury Fields which is most definitely located in flood plain.  From what we have seen of both parks so far HE seems to suggest blatant greenwash from HE as both appear to be convenient dumping grounds for spoil from the tunnels as close to the tunnel portals as possible.

Do traditional flood plains usually have man made land forms stacked up on them?  What impact does that have in regard to flood plains?  Firstly, the flooding from the River Thames will not have the same flow onto the flood plains as it does without these huge mounds.  Secondly, they change the habitat for nature/wildlife.  As the EAC state it is better to restore flood plain meadows.

Wildlife/nature would of course be destroyed and impacted along the entire proposed LTC route, especially when you consider the greenbelt, agricultural land, waterways, and woodland (some of which is ancient).

HE have been very limited on the info they have shared in regard to the wildlife surveys they have carried out, and this is what they have said:

“All surveys have followed best practice guidance in relation to the number, duration and timing of surveys (which is dependent on the species that is being surveyed) within the appropriate seasonal survey windows.  We have agreed our scope with the relevant environmental bodies. Full details of our survey results will be presented in the Environmental Statement that will be submitted as part of the DCO application.  All surveys have been undertaken by appropriately licensed and experienced ecologists.“

How we are supposed to be able to give meaningful response in consultations about environmental impacts and the proposed mitigation is beyond us when they won’t share adequate info for us to review.

We know, just from local knowledge, that Great Crested Newts, badgers, water voles, dormice, marine wildlife, along with numerous different species of bats, birds, bugs, reptiles and other creatures along the proposed route would be impacted.

As we know the proposed LTC is part of that road building programme.  It is also important to bear in mind Transport Action Network’s second legal challenge against the Government’s road policy.  Whilst the Government have now agreed to review the roads policy, they have refused to suspend the policy whilst it is reviewed. This means they can still attempt to push through road projects like LTC, and they would be examined against the current (not reviewed) road policy.  If they agree there is a need to review the policy then there is equally a case to review the road projects which that policy governs.  We wait further update from TAN as to what happens next in regard to potential legal challenge.

Wildlife/nature that is at risk from LTC

Some of our supporters have started sending us photos of wildlife and nature taken in areas that would be impacted by the proposed LTC.  It really brings it home as to what is under threat, and we’d love to see more of your photos of wildlife (and anything else at risk from LTC).

If you would like to send any photos through, with permission for us to use them, please email us – admin@thamescrossingactiongroup.com  Together we are stronger.  Thank you!

Here are a few of the photos we’ve already kindly been sent. (you can click on the images to enlarge)