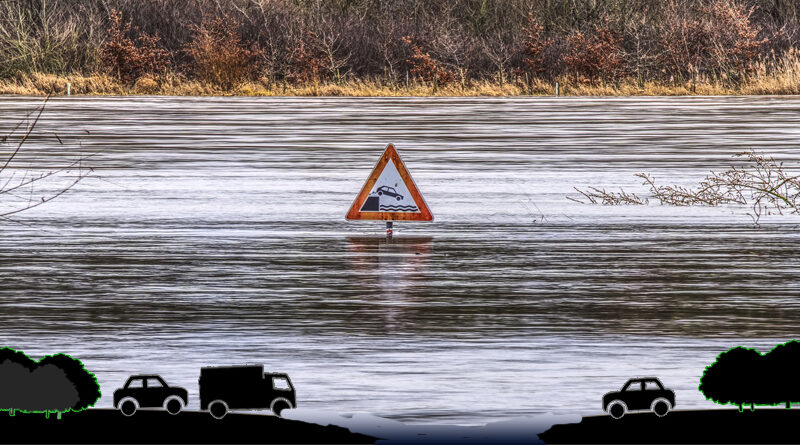 We’re all aware that the proposed Lower Thames Crossing (LTC) route would go through many areas that are flood plains, so what about flooding in regard to the LTC?

Could the tunnel portals be at risk of flooding?  Could the construction of LTC create higher flood risks in areas along the route and to surrounding property, land, and wildlife?  What could the environmental impacts of such flooding be?  If they protect the area around the portals which is close to the River Thames, what impact would that have further up and down river?  Will the proposed land form at the northern portal stop water from the Thames reaching the flood plains of the marshes and instead result in flooding further up and down river?

Whenever we ask Highways England (HE) about flooding risk in regard to the LTC, in Jan 2021 they said:

Regarding reassurances for future flooding, the proposals have been designed to meet the policies in the National Policy Statement of National Networks and the relevant provisions of the National Planning Policy Framework. This sets out Government policy on development and flood risk. In accordance with national policy, the Project would not increase flood risk, with the exception of in some predesignated areas known as Compensatory Flood Storage Areas. In these areas, the land would be lowered and would accommodate any flood water displaced by the Project. The proposed siting of these storage areas has been determined according to the criteria set out in the Flood Risk Assessment (FRA), which will be made publicly available on acceptance of the Development Consent Order (DCO) application for examination by the Planning Inspectorate. The FRA provides an assessment of the risk of flooding to the proposed development and to land elsewhere as a result of the Project being constructed and operated. The assessment has been informed by detailed hydraulic modelling of the Mardyke and its key tributaries, as well as the West Tilbury Main and in line with best practice, the assessments and proposed mitigations include for the projected effects of climate change. The effects of a breach in the existing River Thames defences has also been assessed.

Watercourses that are susceptible to flooding or are important for the dispersal of flood water are known as main rivers. Where it is necessary to cross a main river, the Project would be carried over the river by a bridge or viaduct, except in the Mardyke Valley where an existing large box culvert would be extended to convey the main river (the Mardyke West tributary) under the route and the West Tilbury Main where culverting cannot be avoided. The route would be designed to ensure the performance of main rivers are not affected. This commitment will be secured in the Design Principles document, which sets out the use of clear spanning viaducts over the Mardyke and its tributaries the Orsett Fen Sewer and Golden Bridge Sewer, as well as in the Register of Environmental Actions and Commitment, which includes commitments relating to road drainage and the water environment. These documents will also be made publicly available on acceptance of the DCO application for examination by the Planning Inspectorate.

But after our own research that doesn’t really give us much confidence.  Plus what is with the repeated withholding of info, saying it will only be made available once the Development Consent Order (DCO) application has been accepted.  How can we have been expected to comment on environmental impacts and whether the proposed mitigation is adequate and acceptable when they won’t provide us with the info needed to come to a meaningful response?

The Government’s very own ‘Flood map for planning‘ clearly shows areas at risk of flooding along the proposed LTC route, including around the tunnel portals. 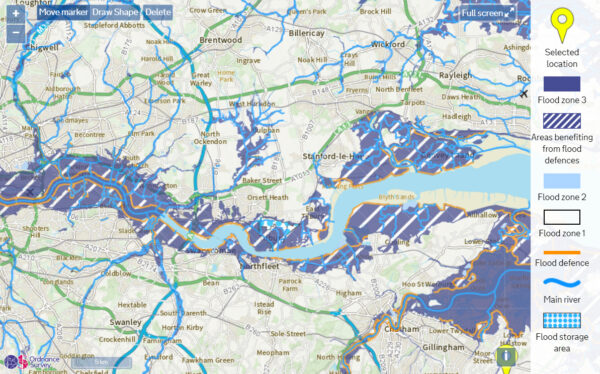 And we found similar on maps from Climate Central and in the Environment Agency’s Thames Estuary 2100 Plan. 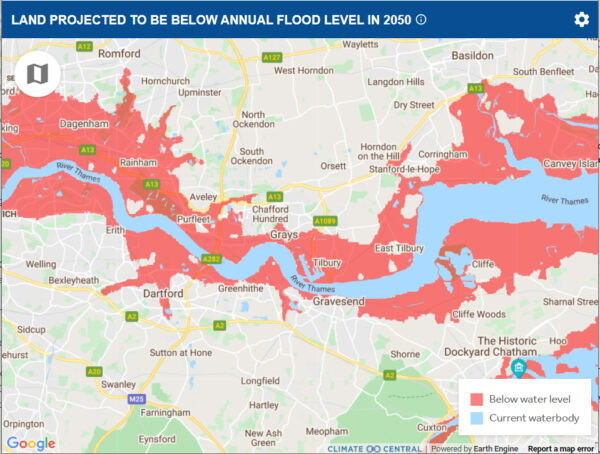 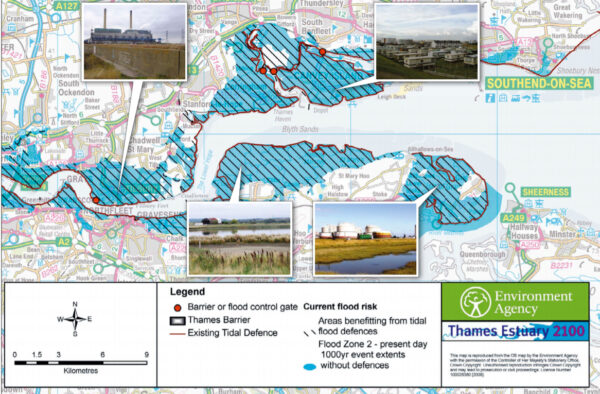 What else is going on regarding flooding?