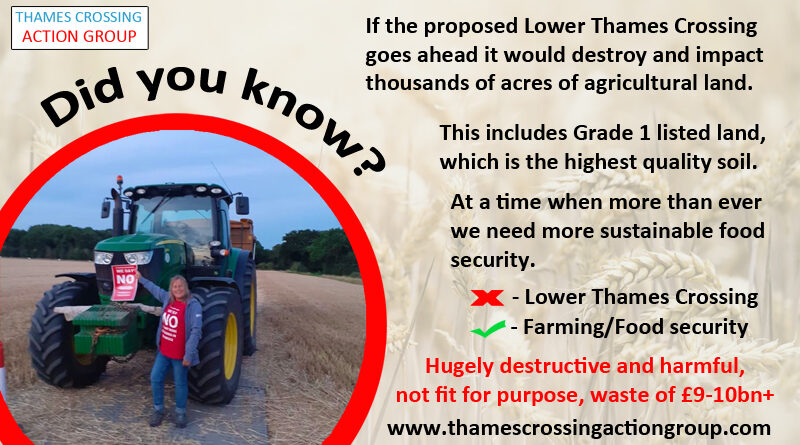 To date National Highways have refused to disclose how much agricultural land would be lost/impacted if the LTC goes ahead, and other that what grade land it would be.

They did mention at a Association of South Essex Local Authorities meeting in Feb 2022, that over 500 hectares (over 1235 acres) of arable land would be converted to semi-natural habitats as part of their sustainability/biodiversity claims for the project.  Whilst we understand the need for supporting biodiversity, we also see this as further loss of valuable agricultural land at a time when food security is of huge importance and should be being prioritised.

Take a look at the information in the map below that shows the Agricultural Grading of the areas that they proposed Lower Thames Crossing would destroy. This info has been gathered from the Government’s own Natural England website. 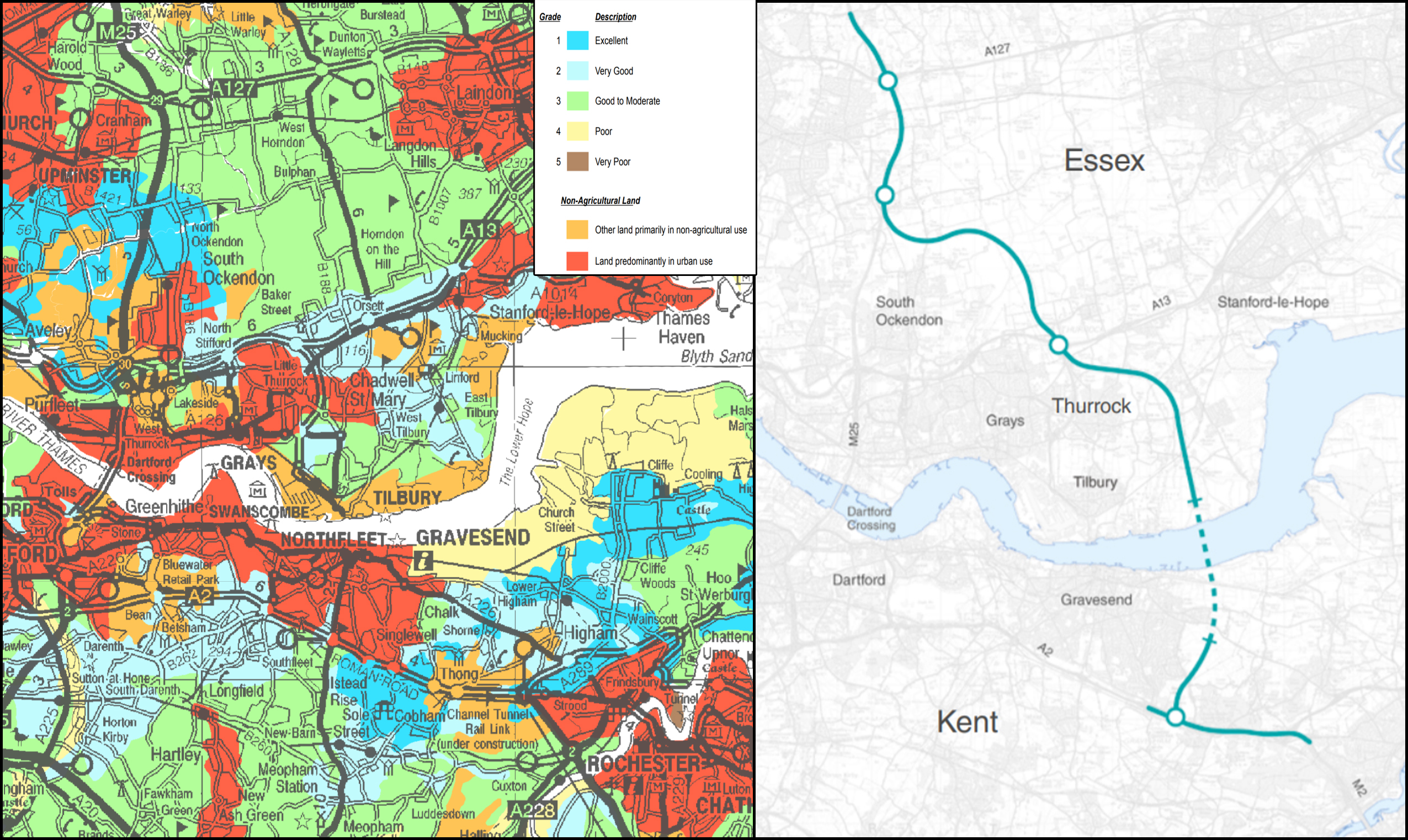 As you can see the proposed LTC route most definitely impacts on a wide range of agricultural land, including the highest grade, Grade 1.

Agricultural Land Classification (ALC) is graded from 1 to 5.  Best and most versatile agricultural land is graded 1 to 3a. The highest grade goes to land that:

Of course as well as destroying the land that would be taken by the proposed route there is also the question of the impact that pollution and water run off from the road would have on the surrounding agricultural (and other) land along the route, if it goes ahead.

Particulate matter including tiny tyre particles, brake dust, and pollution are dispersed and carried on the wind or rain into the surrounding environment, into the ground where the farmers are growing our food.  Ultimately that will affect the quality of the soil, the grade classification, and end up in our bodies via the food we are eating.  We need to be saving and protecting our agricultural land.

Not to mention the fact of if this land is lost where will our food come from?  How many extra food miles would that involve, and what that impact would be to the environment.

Impacts on our local farmers

There is the most obvious impact of the land that would be lost by local farmers along the entire route, but also the other impacts, such as some farmers land being cut off from their farms during construction, if LTC goes ahead.

Highways England/LTC contractors who are carrying out these survey works are impacting the farmers crops already.  Whilst many of the farms have signed non-disclosure agreements so have not been able to talk to us about what is going on in relation to LTC, not all have!  We recently learnt that HE/LTC contractors on one farmers land in South Ockendon had not even had the decency to remove the rubber road matting and cones from his field for when he wanted to harvest his crop.  Earlier on in the year we also witnessed a farm field in Kent whose crop had been killed off in the section of the field that HE/LTC would be carrying out survey works.  LTC is already impacting crops and harvesting, and they haven’t even applied for the Development Consent Order yet. 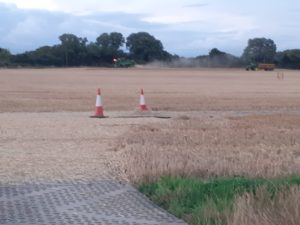 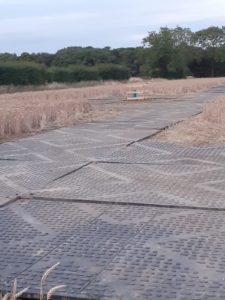 Many farms are owned and farmed by generations of the same family, and we know that to be the case with regard to farms that are impacted by LTC.  Another reason why TCAG continue to fight LTC.

In recent times it has become more apparent, due to Brexit and the COVID-19 pandemic that our country would benefit greatly from supporting our farmers and the British food supply.  We shouldn’t expect to have to fight our own Government to save and protect our agricultural land, environment, and countryside, as we are with our fight against LTC.

The image below of TCAG Vice Chair, Leigh Hughes wearing a bright red ‘No to LTC’ campaign t-shirt, holding a ‘No to LTC’ poster in front of a local farmer’s tractor sums up our opinion on the LTC impacts on farming perfectly! 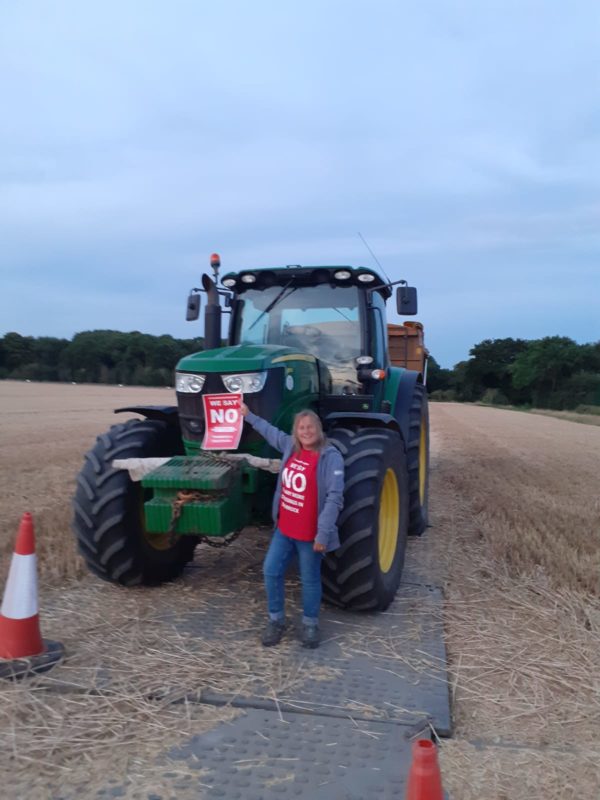 Update 13 Aug 2021 – also worth noting that HE have chosen the busiest time of year for farmers, during harvest, to hold the latest consultation, making it impossible for them to attend events, and harder to ask questions and make time to read consultation materials and respond.