As well as concerns that it would be hugely destructive and harmful, one of the other main reasons that we and so many others strongly oppose the proposed Lower Thames Crossing is because it is simply not fit for purpose.

What is the purpose of the proposed Lower Thames Crossing?

The original decision for a new crossing was due to all the congestion and pollution issues at and around the Dartford Crossing, and that is what National Highways (NH) were tasked to design a new crossing for, to fix those problems.

How much over capacity is the Dartford Crossing?

So would the proposed LTC fix the problems at the Dartford Crossing?

In the 2018 NH predicted LTC would take 22% of traffic away from the Dartford Crossing.

On numerous occasions, before he resigned unexpectedly in July 2019, LTC Project Director, Tim Jones had publicly stated that the LTC would not solve all the problems we all suffer with due to the Dartford Crossing.

More recently on 2nd Sept 2021 in a BBC Essex Radio interview LTC Project Director, Matt Palmer also admitted that the LTC would not solve the problems.

In the 2021 NH now predicted that the LTC would take 21% of traffic away from the Dartford Crossing in its opening year, and that would drop down to just 14% by 2044.

In the 2022 NH have not announced any change to their predictions.  We break down their figures in detail below for those interested.

However, Thurrock Council, who have been provided with traffic modelling data by National Highways, have reached the conclusion that the proposed Lower Thames Crossing (LTC) would take as little as 4% of traffic away from the Dartford Crossing.

So as you can see the answer to the question of whether the proposed LTC would solve the problems due to the Dartford Crossing the answer is NO!

What would happen when there’s an incident at the Dartford Crossing or LTC?

Currently there are over 300 incidents at the Dartford Crossing per year, which as we all know often sees long delays and disruption throughout the region.

National Highways do not have to and are not considering how traffic would migrate between the two crossings when there are incidents, if the LTC goes ahead, and there would not be adequate connections.

The highlights are that there would be just one single lane from the A2 coast bound onto the LTC to the south of the river.  To the north there would be no access to the LTC from the A13 east bound, and there would be 5 lanes on the M25 going on to just 2 lanes south bound on the LTC until past the A13.

Take a look at our Incidents update that gives more detail into why the lack of adequate connections would lead to more chaos, congestion and pollution.

It has been apparent to us for years now that the Dartford Crossing would still be over capacity even if the LTC goes ahead.  Not only would the proposed LTC be hugely destructive and harmful, it would not solve the congestion and pollution issues at the current crossing.  National Highways have even admitted in public that it would not solve the problems.

Not only that, National Highways are not considering or planning how traffic would migrate between the two crossings when there are incidents, if the LTC goes ahead, and there would not be adequate connections.  The result would be more chaos, congestion and pollution.

With the cost now up to £8.2bn, the proposed LTC is simply not fit for purpose, and certainly cannot be considered good value for taxpayers’ money.

Break down of NH predictions on traffic reduction at Dartford Crossing 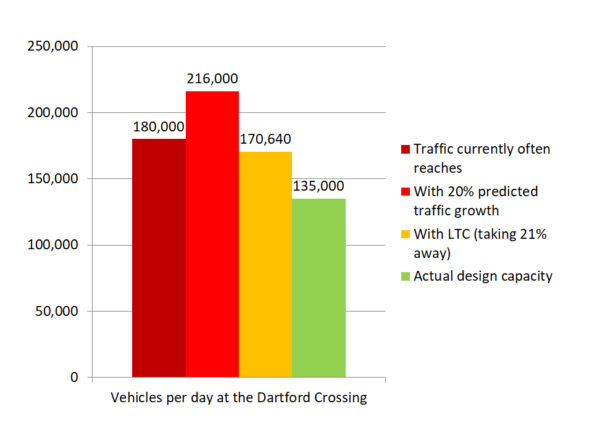