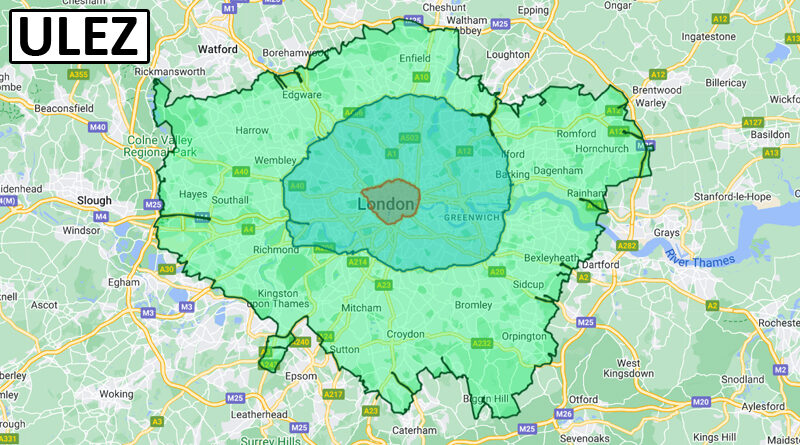 The Mayor of London, Sadiq Khan has announced that the Ultra Low Emission Zone (ULEZ) is to be expanded London-wide from the 29th August 2023.

There have been mixed feelings about the ULEZ expansion, but obviously as a group we have very serious concerns about air quality and emissions.

What would happen in regard to the ULEZ, if the proposed Lower Thames Crossing goes ahead?

Well the maps of the ULEZ expansion clearly show that both the existing M25 and the proposed Lower Thames Crossing, if it goes ahead, would be exempt from the ULEZ.  Not only do the maps show this fact, but it is also apparent that his would be the case because the M25 and LTC are both National Highways roads and part of the Strategic Road Network, which the Mayor of London and Transport for London (TfL) have no control over.

North Ockendon is outside of the M25, but is also part of the London Borough of Havering.  North Ockendon would fall within the ULEZ expansion area.

If the proposed LTC goes ahead it would run right alongside North Ockendon too.

This means that residents living in places like North Ockendon would be subject to the ULEZ charges, even if it were to just do their weekly grocery shop at the nearest shops.  Yet the traffic constantly driving by their homes all day and night on the M25 and LTC would be polluting the area, but exempt from the ULEZ charge.

In October 2019 the Mayor of London, Sadiq Khan committed London to reduce fine particulate matter (PM2.5) pollution in line with World Health Organisation (WHO) guidelines by 2030.  We wrote to him about the proposed LTC at the time, and the response we got from the Deputy Mayor for Transport advised that Transport for London had asked NH to set out why they deem assessment of PM2.5 unnecessary, based on the impacts of the LTC scheme.

As now know Government will be enshrining new laws on air pollution levels, including for PM2.5, and the whole proposed LTC route would fail against those levels.

In light of this latest news about ULEZ expansion we have taken the time to write to the Mayor of London again, to bring to his attention the issue of the M25 and LTC running through ULEZ but being exempt because they are NH roads, not TfL roads.  We also asked if NH had ever responded to TfL’s question regarding the lack of PM2.5 assessment for the LTC.