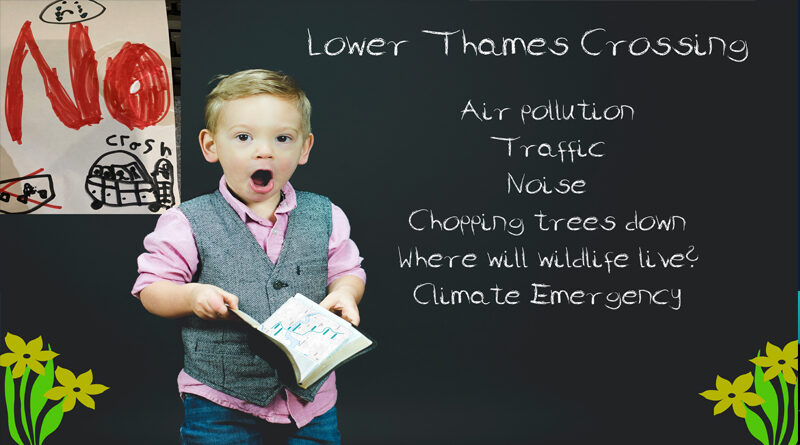 Many people are quite rightly concerned about the negative impacts of pollution from roads, in this update we take a look at some of the impacts the LTC would  have on schools.

After all it is children who will inherit the results of the decisions that are made now.

It is a great concern to many just how close the proposed Lower Thames Crossing would come to so many schools along the entire route.  People have highlighted their local schools as areas of concern in regard to schools south of the river, up through Thurrock, and into Havering to the north of the proposed route.

In Thurrock people have been asking us about the potential impacts of LTC to the new Orsett Academy as they are starting to realise just how close the proposed route would come to the proposed site of the new academy.  We’ve marked roughly where the new academy is proposed in yellow on top of a screen capture of the LTC interactive map showing that area, to highlight this for those asking. (Click map to enlarge)

If you want to check where your child’s school is in relation to the proposed LTC route then click through to the LTC interactive map and check.

A US study found that long-term exposure to pollution from traffic is reducing children’s lung capacity by almost 20%, which has life long health impacts and can reduce life expectancy.

Research carried out across Europe has suggested that up to 30% of all new asthma cases in children are caused by exposure to air pollution.

As recently as June 2021 it has been reported that a quarter of UK pupils attend schools where air pollution is over World Health Organzation (WHO) limit for PM2.5.  They’re the tiny particles from brake dust, tyre wear, road wear etc.  Not only can they get into the lungs, they’re small enough to get into the bloodstream, and can affect many other parts of the body.

Younger developing bodies are particularly vulnerable, and dirty air has already been linked to increased asthma, obesity, and mental disorders in children.

Many of us will sadly be aware of cases like the tragic death of young Ella Adoo-Kissi-Debrah.  In that case the inquest found that air pollution “made a material contribution” to her death.  Coroner Phillip Barlow said there is “no safe level of particulate matter” in the air and called for national pollution limits to be reduced.

We know that the whole proposed LTC route would fail against WHO standards for PM2.5.  We know that our areas are already suffering with illegally high levels of air pollution.

We also know that electric vehicles are not the golden ticket that many often believe, and they do not solve the issue of PM2.5.

Climate and the environment

Of course on top of these very serious concerns on health grounds to children, there is also the aspect of the environment and climate emergency.  We’re already starting to experience huge fires, extreme flooding, and other climate impacts.  We need to act now for all our benefits, and especially for the children who will inherit the health and climate emergency that we are creating for them if we allow projects like the LTC to happen.

Children are learning earlier and earlier about these threats, they have questions about taking care of our environment, and wildlife etc, they don’t want to see the destruction and impacts to any of that and the area they live in, and go to school in.

The impacts during construction will range from the direct impacts we all think of, the pollution, noise, traffic etc, but also things like how they will even get to school with some routes being closed for long periods of time meaning lack of easy access and long detours to even be able to get from home to school, whether walking, cycling, by bus, or in the car.

Children can have their say too!

We’re lucky to have had copies of some of our younger community members consultation responses shared with us.  The NO poster in the main article image was one such fab response from Emily Massey.  Then we’ve had a couple of fantastic poems by Daragh Thomas, and Jayma Thomas. 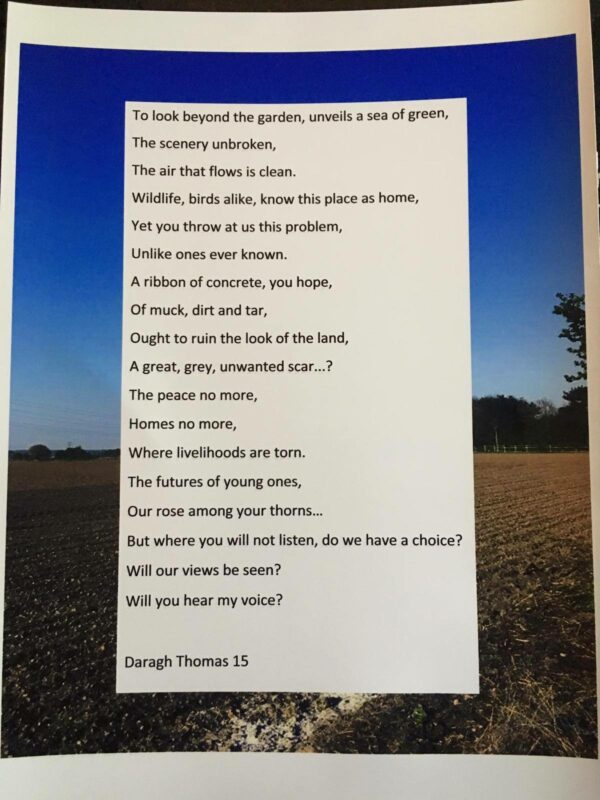 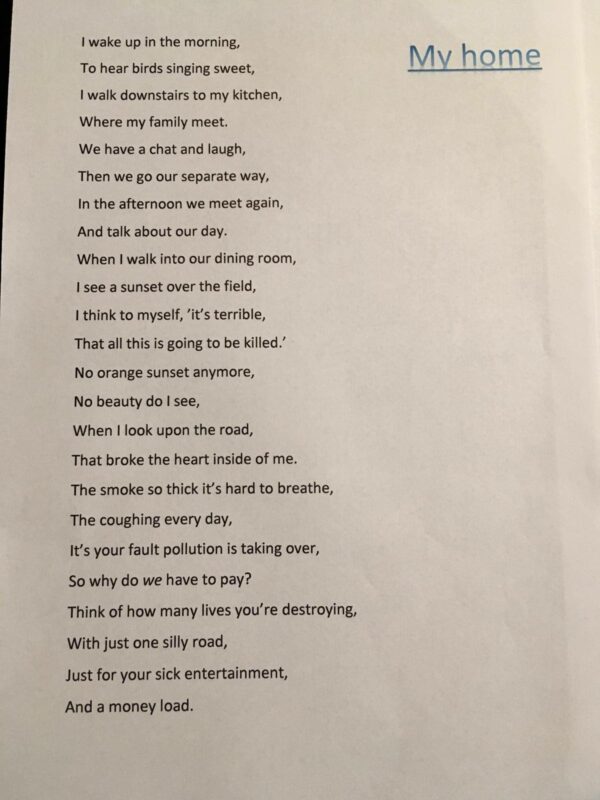 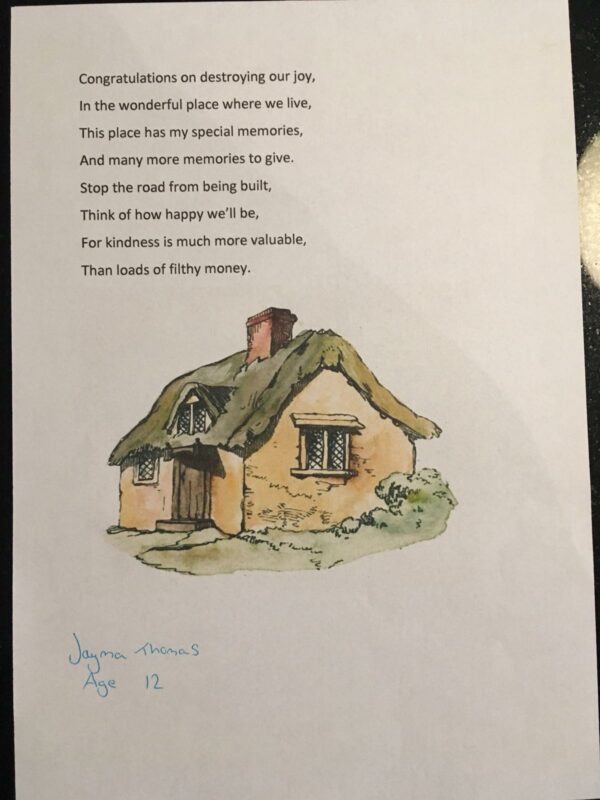 Feel free to share your children’s response with us either on social media or email admin@thamescrossingactiongroup.com we love to hear and see what our younger community members think of LTC!

HE/LTC have today announced via social media that they have been trialling a new LTC Minecraft game in schools that would be impacted by the proposed LTC.  If you have children at East Tilbury Primary School, in East Tilbury or Saint George’s Church of England School in Gravesend they have been piloting the game in your child’s school.  They are now looking for other schools to have the game. 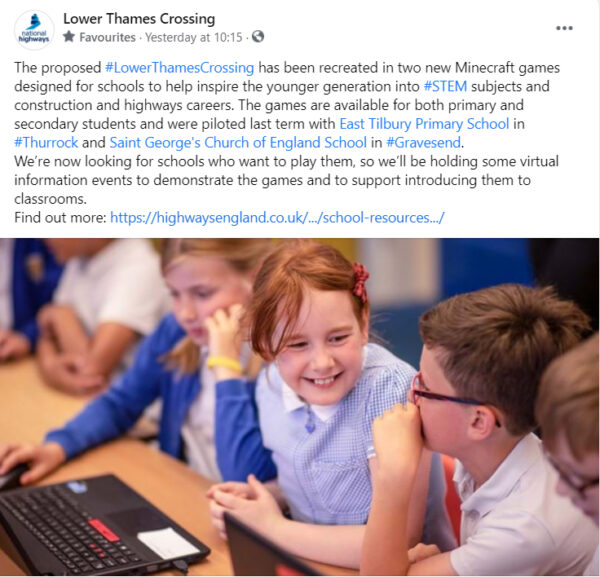 The two LTC Minecraft games are:

Students will learn about tunnelling and have the chance to excavate and build a portion of the new Lower Thames Crossing tunnel using a Minecraft model.

More info can be found on the LTC website here and also read the New Civil Engineer article here.