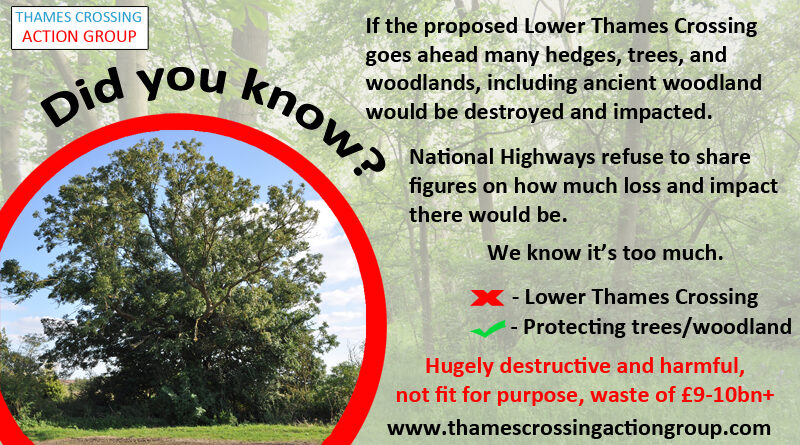 There is no doubting the impact the proposed Lower Thames Crossing would have on so many things, including forests and woodlands (including ancient woodlands), trees in general, and all the wildlife that lives there.

On Jan 30th 2020 a day after the LTC Supplementary Consultation launched the Woodland Trust issued a press release in response to the latest LTC changes. In the press release their message is strong and clear, Highways England has yet again failed to put a figure on the threat to the precious irreplaceable habitat.

The Trust’s own assessment of the impacts is worrying:

Ancient woodland cover stands at just 2.4% in the UK. Ancient woods are defined as land that has been continuously wooded since 1600 which makes them irreplaceable. Many are often centuries older.

Woodland Trusts own ancient woodland, Ashenbank Wood at Cobham in Kent, could be among those at risk. This wood is part of the Shorne and Ashenbank Site of Special Scientific Interest due to its deadwood, veteran trees and open ground habitat. Rare wildlife including great crested newt and dormouse make their homes here. This is just a small portion of what we could lose if the current tunnel plans go ahead.

The sites the Trust considers to be at risk are:

The press release can be found at www.woodlandtrust.org.uk/press-centre/2020/01/lower-thames-crossing/

We would also add Jeskyns Community Woodland, Thames Chase Forest Centre, and The Wilderness to the list of woodland that are at risk.  Jeskyns is located in Cobham, Kent and falls within the development boundary for LTC.  Part of Thames Chase in Upminster, Essex also falls within the development boundary.  Both are Forestry England sites.  In addition, The Wilderness is a private woodland in South Ockendon, with evidence that it dates back hundreds of years. We have discovered so much interesting info out about The Wilderness we’ve popped it into an update all of it’s own here!

We have heard from some residents who are questioning whether any of the land at Thames Chase in particular was actually environmental mitigation land for the M25.  Imagine if that is the case, a new road being built on land that was environmental mitigation for another road project.  We have emailed Forestry England to see if we can find out more.

We have also done a bit of research online about Jeskyns and found out that the site is not without previous environmental problems.  The Forestry Commission bought the land to turn it into a community woodland. Much of the land was arable crops that would usually be harvested by the farmer after the young skylarks had left their nests, along with Corn Buntings and Meadow Pipets.  All are classed as “red species” by the Royal Society for the Protection of Birds – the highest conservation priority because of their rapid decline in recent years.

However, teams of tractors were moved in by the Forestry Commission/Government and ploughed up the fields before around 60 nests full of newly-born skylarks and their eggs had grown and flown the nest. Conservationists fear that all of the birds are dead, killed as they nested.  Evidently a liberal spraying of super-strength pesticide had also ensured that they and other forms of wildlife did not come back.

A Forestry Commission spokesman later admitted that the ploughing was an “operational misjudgement which we regret”. “We certainly had no intention of harming any birds,” he said. “We have commissioned an ornithologist to advise us on the way forward.”

We are aware that the Woodland Trust have launched an LTC campaign – https://campaigns.woodlandtrust.org.uk/page/55154/action/1 whilst we really appreciate the campaign, the fact it raises awareness and allows those that may not otherwise respond to the consultation to do so, we would just politely remind everyone that can to please consider responding individually, rather than as part of a campaign response.

Back in 2016 13,000 responses were lumped together and counted as 1 campaign response from people who had used a template response letter that was created by us (Thames Crossing Action Group). At that time we had not realised that HE would do this, and how that would influence the report on consultation responses.

Obviously taking part in a campaign by popping in your details and hitting submit is of course much better than doing nothing, but if you can please please do consider sending in your own personal consultation response.  Thanks

Benefits of forest and woodlands to our health

It is not just that trees and plants help clean the air we breathe, and give homes and food to wildlife, but also the value of recreation and wellbeing of us being out and connected to nature.

Forestry England share info on these things, and you can even read their Natural Capital Accounts, which are annual reports where they measure all of these things for their woods – www.forestryengland.uk/about-us.

What else can we do?

The Woodland Trust is also asking us, the public, to help spot and report veteran trees. Obviously they can only know about and try to protect these trees if they know where they are, so please do check on their website if you know of an old tree and see if it has been recorded, and if not please add the details to help build their database – https://ati.woodlandtrust.org.uk/add-a-tree/.

HE community woodland nothing to do with LTC – click here