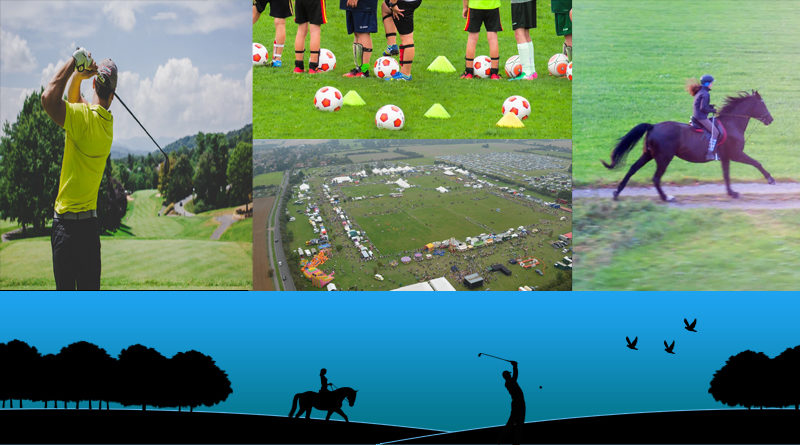 Are you aware of some of the LTC impacts to sports clubs, and leisure facilities, such as the Orsett Show Ground?

The impacts will be either because Highways England/LTC propose purchasing all or part of those sites (or rights over those sites) or taking temporary possession of them to build the LTC.

Southern Valley Golf Club – a private members golf club which HE/LTC propose to permanently acquire for the LTC route and for landscaping.  HE/LTC are not proposing to replace the golf club. They propose to create a new parkland area on part of the site, which would be accessible to the public after construction is complete.

*Update July 2022 – Southern Valley Golf Club announced that they have completed on a Blight deal, and that the club will close on 31st August 2022.

Gravesend Golf Centre – a 9 hole pitch and put golf centre with a driving range.  HE/LTC propose to permanently acquire the pitch and put part, for the landscaped parkland around the southern tunnel entrance.  HE/LTC would provide an alternative site to the south-east of Cascades Leisure Centre, currently part of the Southern Valley Golf Club site, enabling Gravesend Golf Centre to remain in business.

Orsett Showground – Part of the site would be required permanently for the construction of link roads to the Orsett Cock roundabout and the A13.  HE/LTC also propose to move a gas pipeline and permanent rights would be required over a limited corridor of land within the site, to operate and maintain the gas pipeline.  A replacement site for part of the Orsett Showground has been proposed within the development boundary which can be seen in the image below. (Map taken from page 35/58 in Map Book 1). 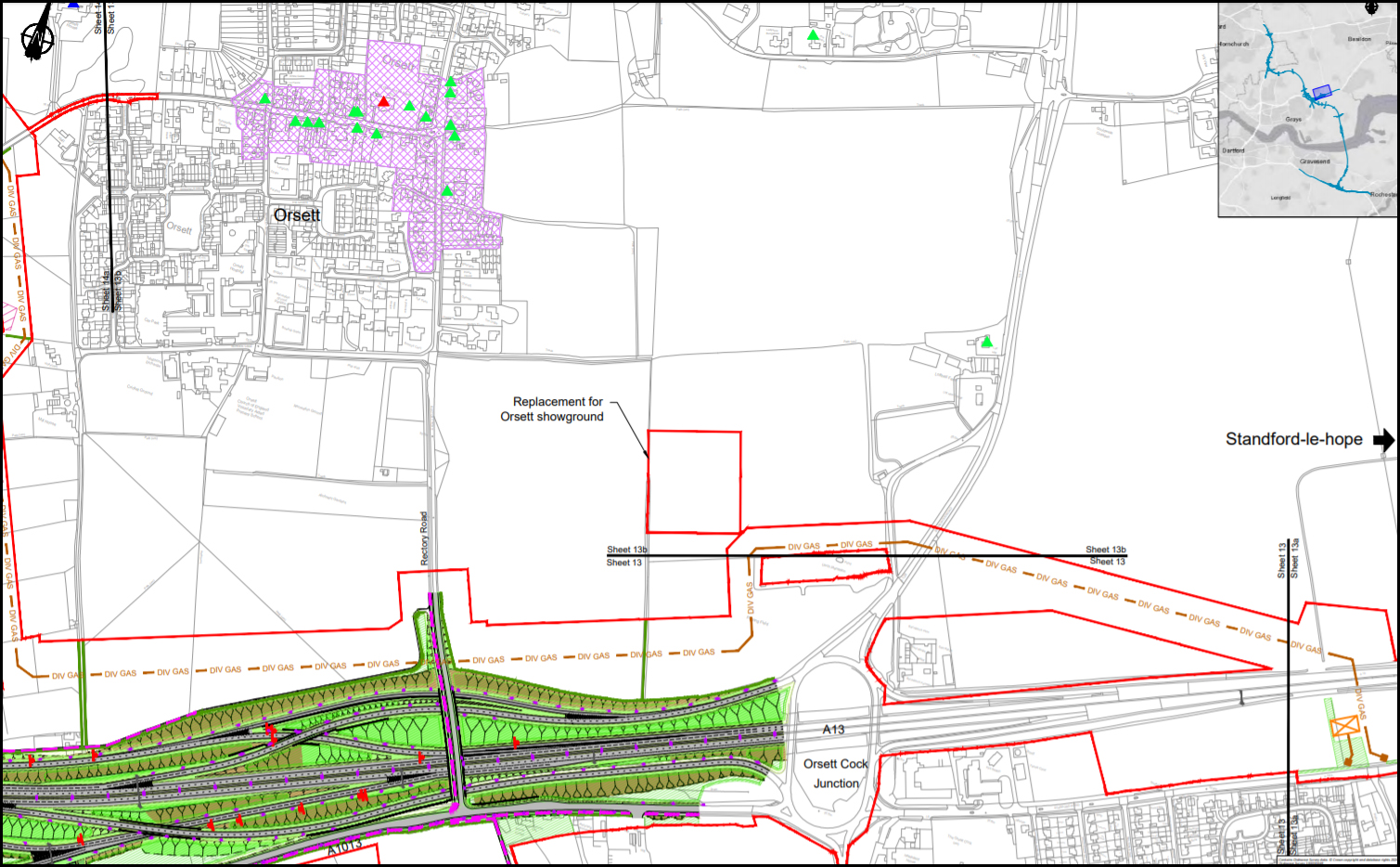 Yes, we noticed that HE/LTC can’t spell Stanford-le-hope too, not sure where they got the extra ‘d’ from!

Anyway back to the showground, is it just us or is the replacement land actually land that is usually used for car parking on Orsett Show day anyway?!

We understand that what we know as the Orsett Showground is actually owned by two different landowners. One section is the main showground, and the other part is where the car park usually is.  We assume this means that what HE/LTC are proposing is to buy the replacement section (within the usual car parking area) for the land owners of the main showground.  However, at the end of the day it still means that the actual space for the show to be held, including car parking will be reduced because of the LTC impact.

Orsett Royals Football Club – a site that is home to a number of football pitches. HE/LTC propose to move a gas pipeline and permanent rights would be required over a limited corridor of land within the site to operate and maintain the gas pipeline.

Orsett Golf Club – part of the site would be used for construction and for diversion of a gas pipeline, but Orsett Golf Club would remain open during construction, with HE/LTC saying that the impact would be kept to a minimum.  What they consider to be a minimum compared to what most of us consider a minimum may vary, we do not know for sure as no further detail has been provided.

It appears that the land within the golf club site needed for construction would include an access road to maintain property access to a private dwelling in the vicinity, and also for an emergency vehicle access route to the LTC southbound. (as shown on page 29/58 in Map Book 1).

Thurrock Rugby Football Club – part of the site would be used for the diversion of overhead electricity transmission cables, but HE/LTC say they do not expect these works to impact the use of the rugby club. Permanent rights would be required over this site for the operation and maintenance of those utilities.

Top Meadow Golf Club – part of the site would be used for restringing of the existing overhead electricity transmission cables for a limited period. Permanent rights would be required over this site for the operation and maintenance of those cables. HE/LTC do not expect these works to significantly impact the use of the golf club.  Again what they consider significant and what most of us would consider significant may vary, we do not know for sure as no further detail has been provided.

Above are details of what HE/LTC have listed on page 91 of the consultation guide.  Of course we also recognise the fact the impact LTC would have on leisure in a more general way.

Equestrian
The LTC would have a huge impact on the equestrian community, with stables, yards, and grazing being wiped out.  It’s all very well HE/LTC saying they are doing this, that, and the other for bridleways in the area, where will people be able to keep and graze their horse and ponies?

Plus stables and yards that are very close to the development boundary, such as Foxhound Riding School in Orsett would also be greatly impacted, especially during construction.  They will have busy noisey construction taking place right opposite where they are trying to ride and teach.  Anyone who knows horses will realise the impact loud noises, sudden movement, and things going on around a horse can have.

Football
Grays Athletic Football Club were planning a new community football facility in conjunction with the Academy and Treetops, to provide day time use for the schools and evening and weekend use for many other youth and adult football teams – boys, girls and disabled – from aged 4 to 75. However, the proposed LTC means those plans have been delayed because of potential land take in the area that was being considered.

Walking and Cycling
As with bridleways HE/LTC are saying they are doing this, that, and the other with regard to footpaths and cycle routes. However, as well as the disruption during construction, think of all the ways LTC will impact our enjoyment, and the health and well-being aspects of going for a walk or bike ride.

We don’t feel enough info has been shared by HE to detail the footpaths, cycle routes, bridleways that would be impacted in a clear and informative way.

We have asked if they can provide us with a map that shows all the footpaths, cycle routes and bridleways, as a whole, all the connections. Because it is near impossible to work out from all the silly little maps they provide in the consultation materials, which are not clearly labelled. Because there is no overall map it is also often hard to judge exactly where these paths and routes run to and from, and many will not necessarily be familiar with the ID number the route they walk or ride. We believe many are still unaware of what the true impacts of the LTC on where they enjoy walking and riding would be because of the lack of clear and informative material from HE/LTC during consultations.

Above are just some of the aspects of the LTC impacts on leisure, everyone will probably know of some kind of impact it would have on their leisure time if LTC goes ahead.