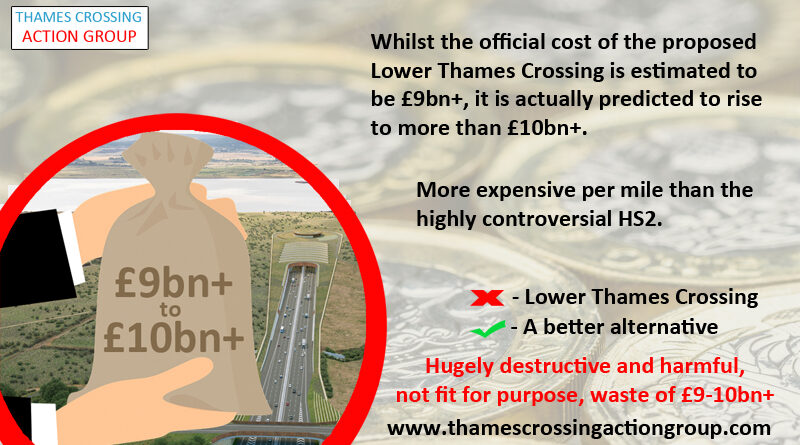 We all know what the true costs are to our lives, health, homes, communities, green belt, ancient forests, agricultural land, wildlife, countryside etc.  What about the financial cost in figures! What is the estimated cost per mile of LTC?

Well, the cost just keeps rising, and according to the Funding Statement, one of the many newly released LTC DCO application documents, shows that the official estimated cost of the proposed LTC is now up to £9bn. However, many predict the cost would actually be over £10bn+, if the LTC goes ahead.

The National Audit Office have also voiced concerns about value for money issues on various road projects, including the LTC.

What does that work out at per mile?

Compare that to the cost of the highly controversial HS2, which is being scrutinised over a cost sitting at at £307m per mile of track.

To be clear we are not commenting that one is any less impactful than the other, this reference is purely to highlight the fact that there is a lot of attention over the cost of HS2, and LTC is a lot more expensive per mile.

And this is tax payers money, and we’ll be charged to use it too if it goes ahead!

And that’s not even the true cost!

As we all know projects of this size and scale never run to budget, so we can safely presume that the overall cost for LTC will be over £9-10bn.

In addition to the cost of the actual project in monetary terms there is of course also the cost to our lives, health, communities etc. The environmental cost with the loss of greenbelt land, ancient woodland, grade 1 agricultural land, countryside, impacts to wildlife and their habitats.

How do you put a price on all of that?  How much will end up being spent in NHS costs as a direct result of the air pollution related illness caused by the LTC Toxic Triangle?

Thurrock Council have published a report that states at least £150m in loss to Thurrock as a direct result of LTC if it goes ahead, and that was back in 2020.  If one impacted local authority reports this kind of impact then surely it can be considered that the other impacted areas will also be impacted in a similar way?

Then there’s the matter of how NH/LTC have removed the Tilbury Link Road and Rest/Service Area from the LTC project, but both projects are now being considered as separate stand alone projects in their own right.  We would question whether this is being done to try and make the benefit cost ration of the LTC look better than it really is. To be clear the Tilbury Link Rd is already featuring in the Road Investment Strategy 3 as a pipeline project, and we know the rest/service area is also still being discussed as a separate project.  If they are deemed worthy enough to still be considered in these ways, then why have they been removed from the LTC project?  Not that we want them of course, but the question has to be asked!

Other road projects like Kent County Council’s Blue Bell Hill improvements are being progressed as a direct result of the LTC, and again were originally part of the route options, since the connection was part of the route option known as Variant C.  The Port of Dover have also called for the dualling of the A2 from Lydden to Dover, if the proposed LTC goes ahead.  Again all at additional cost and all as a direct result of the LTC, if it goes ahead.

Oh and then there’s the issue of all the other additional works that will need to take place to the existing road network as a direct result of LTC.  We all know that if the LTC goes ahead it will create the need for much more additional work on the connecting roads, because we know that NH/LTC are not factoring in adequate connections, and it is not fit for purpose.  The proposed LTC would also utilise local roads such as the Orsett Cock and surrounding roads to enable the LTC to operate, which would result in further funding being needed for management and maintenance of such roads.

Not forgetting that the Dartford Crossing will still also be over capacity even if LTC goes ahead, so more money will need to be spent trying to fix that.  So all this cost in so many ways and forms, yet the original issue that the LTC was meant to address will still not be solved.

National Highways had been keeping the ever rising cost as quiet as they can, not even mentioning it in consultations.  It has only been since the DCO application documents were published that we saw their latest estimate, which many still find hard to believe and expect it to rise further.

Ask yourself whether you really feel that spending £9-10bn+ of tax payers money is good value for money, for a project that doesn’t even fulfil it’s original task to solve the problems at the Dartford Crossing.