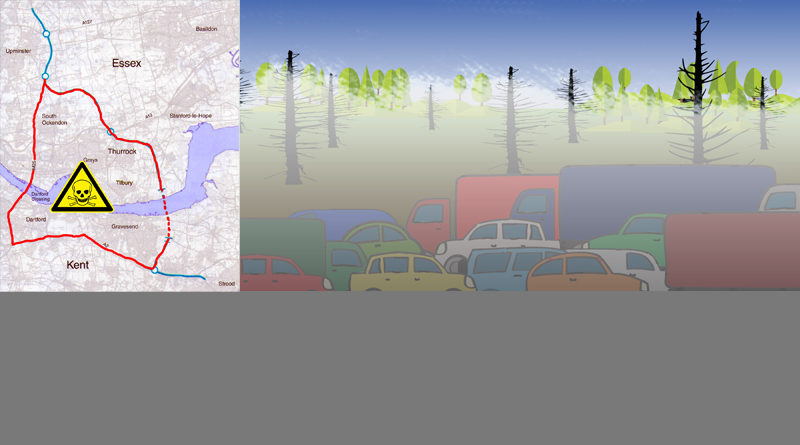 The proposed Lower Thames Crossing would create a hugely destructive toxic triangle, and is not fit for purpose. 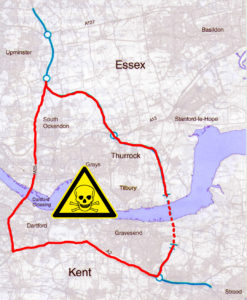 We have covered the toxic triangle aspect of LTC before.  For those who might not already be aware, the triangle is made up of the M2/A2 along the bottom, with the LTC and M25 running up the two sides of the triangle, as you can see in the image to the left.

The financial cost is always talked about, and that is of course important, but there are other things that need to be taken into account, real life costs, such as the real cost to our health.  Also what about the cost to the National Health Service in relation to all the air pollution related illness that people will suffer.

Those of us in areas surrounding the proposed route already have to deal with illegally high levels of pollution, and the impacts it has to our health.  Not to mention the impact living near these crossings has and would have on our mental health and wellbeing on top of everything else.  We deserve better.

In July 2019 we learnt at the LTC Task Force meeting that “Highways England has appointed Karen Lucas, a Professor of Transport and Social Analysis at the University of Leeds, as an independent advisor to the community impacts workstream for LTC, providing additional rigour and objectivity to the assessment work being undertaken. Professor Lucas also chairs the Community Impacts Public Health Advisory Group.

The CIHP Advisory Group was established in November 2018 comprising an independent chair, representatives from the LTC project team and senior representation from Local Authorities potentially affected by the project (invited Local Authorities have been by virtue of their proximity to the project and registered interest and include Kent CC, Essex CC, Thurrock Council, Medway Council, Southend-on-Sea BC, Gravesham BC, Dartford BC, London Borough Havering and Brentwood BC).”

“Working on social evaluation project for Lower Thames Crossing. If Higheays England was forced to evaluate PM 2.5 the whole project exceeds WHO health guidance. BUT it is not current UK or EU guidance. Sorry Thurrock! @yourthurrock @Jen_robrien @thurrockcouncil“

You can’t see them, but every day, we all breathe in tiny toxic particles which damage our heart and circulatory health. They are an invisible killer.  These are known as fine particulate matter or PM2.5.

The British Heart Foundation article (found here) states that around 15 million people in the UK live in areas where average levels of tiny toxic particles in the air exceed guidelines set out by the World Health Organization (WHO). 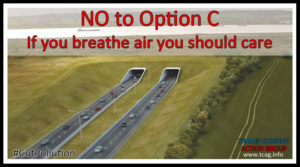 The UK subscribes to EU limits on PM2.5, but these are not as strict as those set out by the World Health Organisation (WHO). WHO guideline limits are for PM2.5 annual average levels to be below 10 micrograms per cubic meter, or 10µg/m3. EU limits are over twice that at 25µg/m3.

Research has shed light on how harmful pollutants like PM can enter the bloodstream and cause damage to people’s heart and circulatory systems, increasing the risk of potentially deadly heart attacks and stroke.

You may have seen articles like this that highlight the dangers, and make the comparision that our poor air quality is equivalent to smoking almost 140 cigarettes every year.

We need and deserve WHO standards on PM2.5

In July 2019 the Government released a report on Assessing progress towards WHO guidelines for PM2.5 in the UK.

In October 2019 there was talk about the possibility of a new Clean Air Act potentially being announced as part of the Government’s upcoming Environment Bill.  The hopeful news for us was that former UK Environment Secretary Michael Gove has evidently suggested that the Bill will enshrine WHO guidelines for PM2.5 in law.  With Brexit, the General Election, and COVID-19 things seem to be taking some time to be sorted.

However, the Mayor of London, Sadiq Khan has already pledged to reduce fine particulate matter (PM 2.5) pollution in London in line with World Health Organisation (WHO) guidelines by 2030.   We wrote to the Mayor in Oct 2020 which you can read more about here.

Let us not forget that the northern part of the proposed LTC route falls in the London Borough of Havering, regardless of whether Government has yet to enshrine the same into law for the whole country, which we hope will happen!

As recently as June 2021 medical leaders have been urging Boris Johnson to bring PM2.5 levels to below what is recommended by WHO.

Highways England are currently predicting that the proposed LTC would open in late 2029/30 if they are granted a Development Consent Order.  To be spending £8.2bn (which as we all know will likely keep rising) on LTC for a road that will not comply with WHO standards on PM2.5 by 2030, just around the time of opening seems ludicrous and totally unacceptable.

It’s not just humans who suffer either

As well as the impacts to human health PM2.5 is also harmful to the environment, especially when the particles get into waterways. Here is just one example of such cases, and clearly when you have harmful particles entering the environment there will be all sorts of negative impacts.

Please do ask your MP what is happening in Government regarding getting WHO standards enshrined in UK law for the whole country.  Ask them to support this move, and let them know that you are aware that Professor Karen Lucas has stated that LTC would fail against WHO standards on PM2.5 – More details.

You may also wish to email the Secretary of State for Environment, Food and Rural Affairs, George Eustice MP – secretary.state@defra.gov.uk.