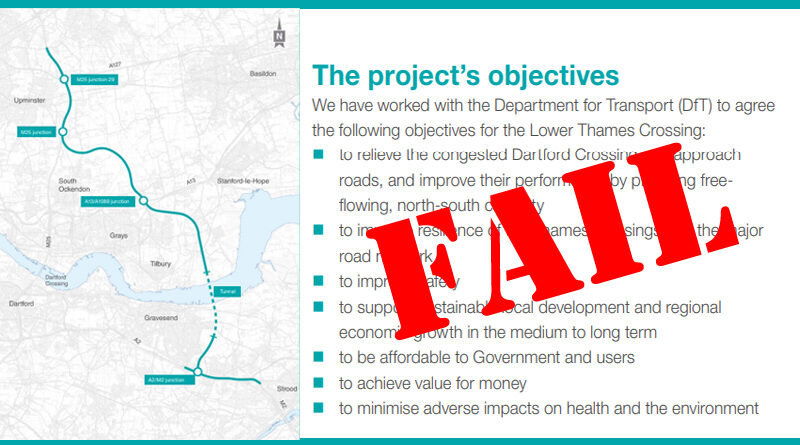 (Listed on page 10 of the Local Refinement Consultation Guide)

Clearly there is evidence to show that the project fails on all these objectives.

To relieve the congested Dartford Crossing and approach roads, and improve their performance by providing free flowing, north-south capacity

Thurrock Council have recently concluded after analysing official National Highways traffic modelling data that the proposed Lower Thames Crossing would take as little as 4% of traffic away from the Dartford Crossing in the am peak, and 11% in the pm peak.  National Highways official claim is that it would take around 20 or 21% of traffic away, dropping to 14% by 2041 (with no indication of what points between predicted opening year of 2030 and 2041 the reduction would drop further).

There would also be a 50% increase in cross river traffic if LTC goes ahead.

Regardless of which figure you use none are enough to bring the Dartford Crossing back below its design capacity, to allow traffic to flow freely.

The latest changes to the proposed LTC include a new Orsett Cock to A1089 south connection which would utilitise the existing and local road network.

There is also the issue of the lack of adequate connections which would result in traffic needing to take the Stanford Detour, again utilising the existing road network.

And all this is before you even begin to consider what would happen when there are incidents at either crossing.  National Highways are not considering or planning how traffic would migrate between the two crossings when there are incidents, and there would not be adequate connections, which would result on more chaos, congestion and pollution throughout the region.

National Highways own data had detailed that there are forecast to be 2,147 additional accidents over 60 years, including 26 fatalities, 220 serious injuries and 3,122 slight injuries if the LTC goes ahead. This only adds to evidence against road safety on the LTC.

There is also the aspect of the health impacts the proposed LTC would inflict on communities. Breathing illegally high levels of deadly air pollution can in no way be considered safe.

With the estimated cost of the proposed LTC now up to £8.2bn the cost has already risen considerably since the preferred route was announced back in 2017.

With cost in construction rising considerably in recent times the cost of the proposed LTC looks set to rise further.

Not only that NH are now claiming the proposed LTC would be the “greenest road ever built in the UK”.  This again would mean further increase in cost, with the construction industry estimating that greener cleaner options for construction equipment cost more than 3 times as much as what is mainly being used now (fossil fuel).

There are also costs to the NHS and businesses to take into account from air pollution related illnesses impacting the local communities.  Plus the cost to our environment from such a hugely destructive and harmful project.

There can be no doubt when reviewing the evidence that the proposed LTC would most definitely not offer good value for money, as it would meet none of the scheme objectives, so would be a complete waste of £8.2bn+ of taxpayers’ money.

To minimise adverse impacts on health and the environment

The proposed LTC would create a toxic triangle.  There is evidence that the whole proposed LTC route would fail against the newly proposed air quality levels inc PM2.5 that are due to be enshrined into UK law in Oct 2022.

It is also estimated to emit over 5 million tonnes of carbon, which is again not compliant with the Government’s legal commitment to Carbon Net Zero.

The above is just an insight into the evidence that proves that the LTC fails when it comes to the project objectives.