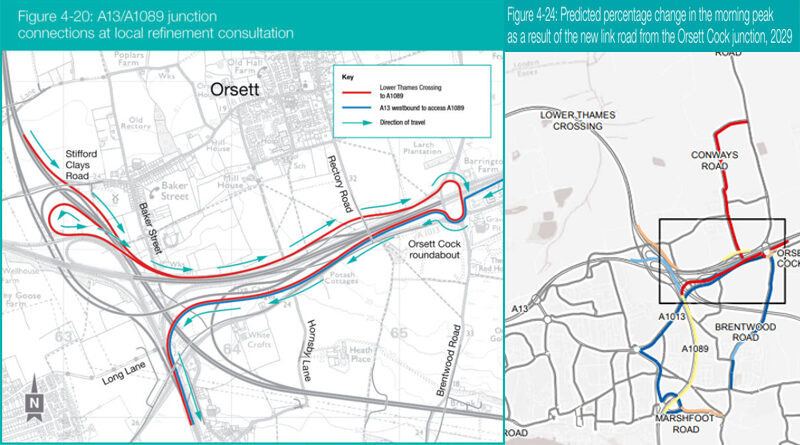 If the proposed Lower Thames Crossing / A13 junctions were to go ahead, it would see a huge negative impact to those roads and the surrounding areas.  In the Local Refinements Consultation National Highways/LTC announced some changes to the LTC/A13 junctions that would see the Orsett Cock roundabout utilized with new access to the A1089 (south).

From what we can see this would not be a solution, but just add to the problem, congestion and pollution.  You may remember that Thurrock Council expressed concerns over this in the March LTC Task Force meeting.

We’ve only just reached the stage of the A13 re-opening after the years of the widening project, which would seem like the tip of the iceberg compared to what we’d have in store if the proposed LTC goes ahead.  Also worth noting that the A13 widening sees the addition of traffic lights on the Orsett Cock roundabout too.

How would the Orsett Cock to A1089 south connect?

As you can see in the map below, taken from the Local Refinement Consultation Guide, a new connection is being proposed. 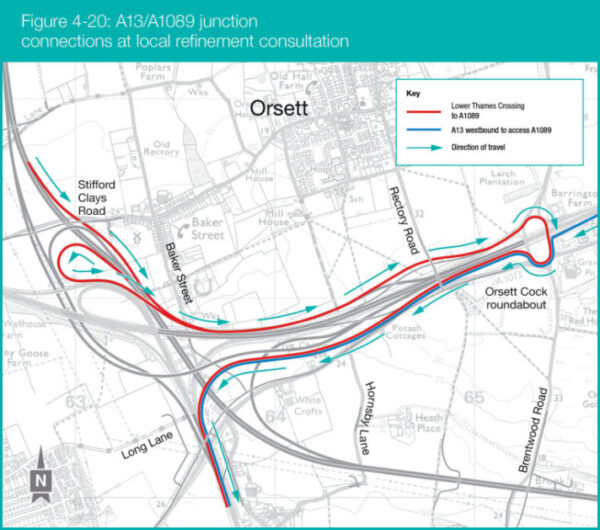 NH are now proposing adding a new slip road from the Orsett Cock-A13 west slip road that would connect to the A1089 south, for access to the Port of Tilbury/Thames Freeport and other traffic.

For some strange reason, not explained by NH in the consultation materials, they predict that this change would see a traffic increase of more than 40% along Conways Road and Rectory Road in Orsett, if it goes ahead. 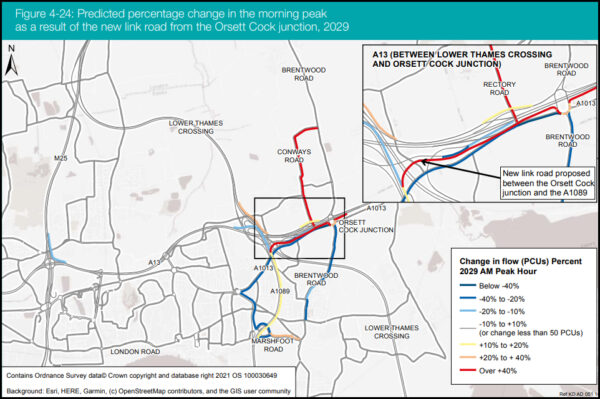 No we can’t work out why traffic, presumably on the A128 travelling south, would all of a sudden decide they need to slow down to make a right turn into Conways Road, head up through the narrow country lane, into the 30mph Rectory Road, all the way to the southern end, wait to turn left onto the Stanford Road/A1013/Old A13, down to the Orsett Cock roundabout to take a hair pin turn to get onto the A13 west slip road to get onto the A1089 connection.

Why would they not just use the A128 all the way to the Orsett Cock roundabout and take the easier route onto the A13 west slip road and connect to the A1089?

There would also be nothing to stop them using other local roads to access the A1089, especially as congestion builds, the rat running would increase.  Plus we still believe some traffic would still use the Stanford Detour in attempts to reach the new connection via the A1013/Stanford Road/Old A13 to the Orsett Cock.

There are other changes to traffic flow on the maps provided that don’t make sense too.  We have lots of questions for NH on this new proposal, and will update further as we receive responses.

It is of particular importance to note that National Highways/LTC have not fully assessed the air and noise pollution impact from this change, and do not aim to share such info with us before they attempt to resubmit the Development Consent Order (DCO) later this year.  This is again something TCAG and Thurrock Council are concerned about.