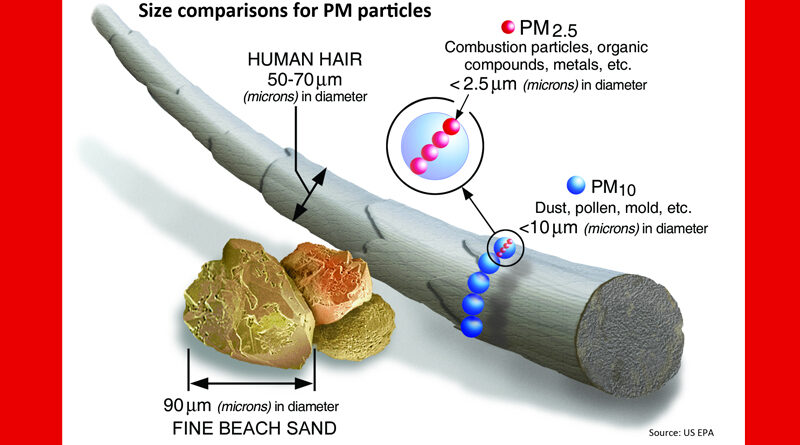 PM2.5 (Particulate Matter 2.5) is something many are very concerned about when it comes to the proposed Lower Thames Crossing, and rightly so.

When we are referring to PM2.5 in regard to LTC in general we are talking about tiny particles that come from things like brake dust, tyre wear, road wear etc.

What’s the problem with PM2.5?

PM2.5 are particles so tiny (take a look at the image below for size comparisons) they can get into your lungs and then into your bloodstream and are very dangerous.  Exposure to PM2.5 can cause illnesses like asthma, COPD, coronary heart disease, stroke, and lung cancer. There is also evidence that links PM2.5 to low birth weight, diabetes and diseases such as Alzheimer’s and Parkinson’s. 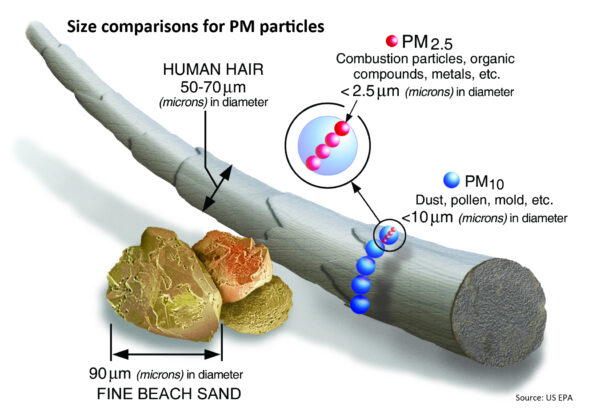 According to figures published by NHS England, an average of 5% of deaths in those aged over 30 can be attributed to PM2.5 air pollution. That’s 1 in every 20 deaths. Sadly, you will probably also be familiar with the fact that a coroner ruled that air pollution contributed to the death of 9 year old Ella Kissi-Debrah in London in Feb 2013.

PM2.5 is also very harmful to the environment and gets into the soil and water supply.

What is PM2.5 like in our area without the LTC?

In 2018, 115 out of 317 local authorities (36%) had unsafe levels of PM2.5 that were over the annual level recommended by the WHO. This is obviously prior to WHO’s latest update to their guidelines in Sept 2021, so these figures are likely to been even worse now.

According to the British Lung Foundation Task Force for Lung Health – Thurrock, Gravesham, Havering, Dartford and the surrounding areas all had PM2.5 levels that breach WHO limits (this was also prior to the Sept 2021 update from WHO).

The Mayor of London has committed London to comply with WHO standards for PM2.5 by 2030.  Remember the northern section of the proposed LTC route falls within the London Borough of Havering.

What about PM2.5 limits in regard to LTC?

As per our previous update on LTC – the toxic triangle  professor Karen Lucas publicly stated in July 2019, whilst working for Highways England (as an independent advisor to the community impacts workstream for LTC) that the whole proposed LTC route would fail against WHO limits.  However, at that time of her tweet PM2.5 guidance in the UK was not the same as WHO guidelines.

On September 2021 the World Health Organization actually updated their PM2.5 guidelines to make them even stricter than they had been, meaning air pollution should be even lower.  At the time British legal limits for PM2.5 and nitrogen dioxide were four times higher than the new 2021 World Health Organization (WHO) guidelines. That said, there’s no safe level of air pollution. Even the WHO’s recommended limit does not guarantee you suffer no harm.

What are the legal targets for PM2.5 in the UK?

On the 16th December 2022 Government finally announced new legal targets had been set out for the Environment Act, including targets for PM2.5.  The new targets are at the same levels as Professor Karen Lucas has previously stated the proposed LTC would fail against. This is just one of many aspects that we continue to fight the proposed LTC on.

A bit of history about the Environment Bill/Act

For some time we and many other campaigners have been pushing for WHO standards for PM2.5 to be enshrined into UK law, and the route to do that is by getting it into the Government’s Environment Bill.

Frustratingly, the Government kept delaying this bill.  Environment Minister Rebecca Pow pledged in January 2021 that “…we will achieve Royal Assent before COP26”. Her Lords counterpart Lord Goldsmith reiterated this welcome commitment in June, reassuring peers that “it is absolutely our intention that the Bill be passed before COP26”. He went so far as to stress that missing this deadline would “weaken our hand in these extraordinarily important climate and environment negotiations”.

There was good news on 6th Sept 2021 when the Lords voted for the Environment Bill to include WHO standards for PM2.5 to be met by 2030.

However, it then went back to the Commons for MPs to vote on the Lords amendment on the 20th October 2021, when MPs voted on a motion to disagree with the Lords Amendment 3 in the Environment Bill.

Because the majority of MPs voted against the Lords amendment to include WHO guidelines on PM2.5 to the Environment Bill, the game of ping pong between the Lords and MPs continued.  The Environment Bill has now gained Royal Assent and becomes the Environment Act 2021 in UK law.  It included a legal commitment to set certain targets, including for PM2.5 by the end of Oct 2022.

On Oct 28th 2022 Government announced that there will be a delay in setting new targets, read more here.

Finally on the 16th December 2022 the new targets were set.