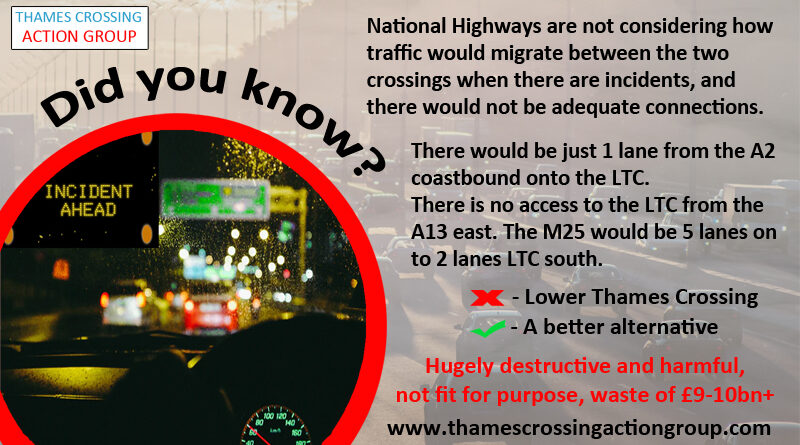 There are more than 3000 incidents per year at the Dartford Crossing,  which as we all know often sees long delays and disruption throughout the region.  But what about when there are incidents if the LTC goes ahead?

The short answer is that National Highways are not considering how traffic would migrate between the two crossings when there are incidents, if LTC goes ahead, and there would not be adequate connections, which would result in more chaos, congestion and pollution.

So what would happen?

These are some scenarios if the LTC were to go ahead

When there’s an incident at the Dartford Tunnels 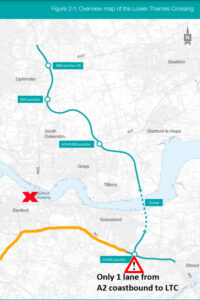 If traffic comes off the M25 onto the A2 coastbound in an attempt to get on to the LTC there would be just one single lane from the A2 coast bound onto the LTC.

How long do you think it would take for traffic to start trying to cut through by any route it can either to try and access the LTC, or start heading westbound into London to use a different crossing, as it does now?

When there’s an incident at the QE2 Bridge 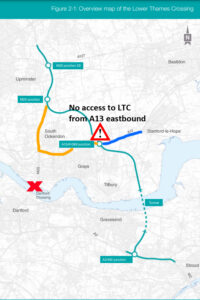 If traffic were to come off the M25 onto the A13 eastbound (junction 30), it would have to go all the way down to the Stanford (1014) junction. Then up and around the traffic lighted roundabout. Remembering this junction is used by the likes of DP World and London Gateway so already a busy junction.  Then back westbound on the A13 until just past the Orsett (A128) junction, to the new joint LTC (both directions) junction.  Note neither the LTC is accessible from the Orsett junction.  This has now been dubbed the Stanford Detour, and is shown in blue on the map. 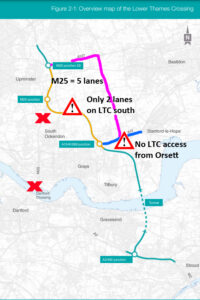 If instead it attempts to come off the M25 directly onto the LTC, the M25 at this point would be 5 lanes of traffic, and the LTC southbound (between the M25 until just past the A13) is just 2 lanes of traffic.

When that all starts to back up, if traffic instead tried to come off the M25 onto the A127 (junction 29) to cut down the A128 (shown in pink) in an attempt to reach the LTC it would need to take the Stanford Detour(shown in blue), because remember there is no access to the LTC from the Orsett/A128 junction.

Alternatively, traffic could also very likely start heading into London on the various routes it currently does when there are incidents. 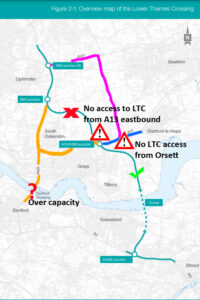 If traffic continues southbound down the M25 it would then either take the Dartford Crossing, which would still be over capacity. Or it would take the A13 eastbound, again having to take the Stanford Detour as outlined previously and shown in blue.

Alternatively, some traffic may think it can come off the M25 at junction 29 onto the A127 to cut down the A128 (shown in pink). But of course yet again it would need to take the Stanford Detour (shown in blue) to get back onto the LTC to cross the river. 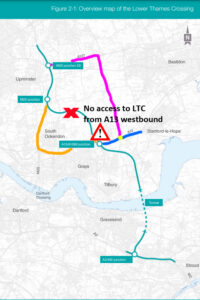 If traffic came through the LTC tunnels heading northbound and then could not continue on the LTC past the A13, it would have to come off the LTC at the A13, but there would be no access to the A13 west bound.  Instead it would have to head east on the LTC to A13 connecting slip road to the Orsett Cock roundabout (marked with yellow dot), round the traffic lighted roundabout and then back westbound along the A13 to the M25.  Or possibly try cutting up the A128 (shown in pink), or via local roads. to the A127 and onwards either back to the M25 or other routes.  Or as traffic starts to build, which wouldn’t take long, it may try to use the Stanford Detour (shown in blue) rather than sitting waiting to get round the Orsett Cock roundabout. 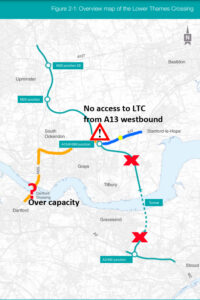 If traffic has left the M25 on to the LTC south and then faces an incident on the LTC south of the A13, it would need to come off the LTC on the slip road to the A13 where via the connecting slip road it would have to go around the traffic lighted Orsett Cock roundabout (marked with yellow dot), to head back west on the A13 to get back on the M25 to use the Dartford Crossing.

Again when the traffic is queuing to get around the Orsett Cock roundabout, traffic is also likely to use the slip road from the LTC onto the A13 eastbound to take the Stanford Detour (shown in blue) to turn around and head back westbound on the A13 to the M25, and/or use other local roads to cut through wherever they can to get to their destination.

If the incident is in the tunnels or further south traffic could be ‘turned around’ via the newly proposed operations/emergency access point (see this update for more info). 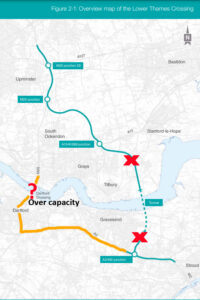 If you were driving along the M2/A2 hoping to travel northbound on the LTC and there was an incident on the LTC, you would need to continue westbound on the A2 to the M25 and use the Dartford Crossing. If this happened it is highly likely that traffic would also use any route possible to try and cut through to the Dartford Crossing, which would of course still be over capacity.

NH are also always saying about how many electric vehicles there would be on the road by the time LTC opens (if it goes ahead). How will EVs cope in such scenarios?  How long until they need to be charged and where would be available to charge?  If EVs run out of power then think of the additional impacts to lane closures etc whilst they wait for roadside assistance. Plus if more people are driving EVs because they think they are cleaner and greener, congestion is likely to worsen.

And how long would this go on before it is officially confirmed that it is not adequate, and yet more road ‘improvements’ are planned?  Is this a ploy by NH to future proof their jobs/work?  Could improvements even be made to the planned LTC to improve things bearing in mind the complex way the junctions are being planned?

Ultimately, just another reason why the proposed LTC is simply not fit for purpose.