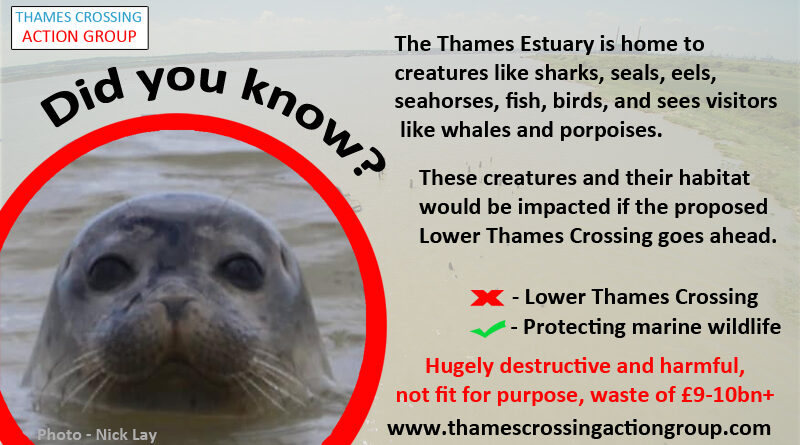 One of our most famous marine visitors to the Thames was Benny the Beluga whale who came to visit for a bit back in 2018.  Benny arrived during the LTC Statutory Consultation, just in time to say No to LTC!  Investigative survey works had to be delayed whilst he was in the area!

As well as visiting whales, other more regular inhabitants and visitors to the Estuary include sharks, seahorses, seals, and eels dolphins and porpoises, as well as numerous varieties of fish (including species of conservation importance such as smelt), and birds.

The Lower Thames Crossing would be located within an influencing distance from three European sites of marine biodiversity importance: the Southern North Sea Special Area of Conservation (SAC), Thames Estuary and Marshes Ramsar site and the Thames Estuary and Marshes Special Protection Area (SPA). In addition, there are five nationally designated sites including SSSIs and the Swanscombe Marine Conservation Zone.

Water is needed for such machinery, and whilst we have been advised the water would come from the water mains,  once used it would then be pumped to the surface, treated and then pumped into the River Thames.  There would also be the need for other water discharges into the estuary, this would have the potential to change flows, water quality and sediment deposition and result in impacts to habitat and species.

For the river and the wildlife in the estuary the proposed LTC would mean disruption, noise, vibration, light pollution, air pollution, and risk of water pollution, as well as risk of harm from boats associated with the construction of the LTC, if it goes ahead.

There are also the changes the proposed LTC would have on flood plains along the estuary, and the resulting changes this would bring.

Not only all of this but we also have serious concerns about the impacts of things like nitrogen deposition to the estuary and watercourses along the whole route.

There is scientific evidence too that PM2.5 (Particulate Matter 2.5) from things like brake dust, tyre and road wear also pollutes rivers and can cause harm to both the river as a habitat and its inhabitants and visitors.

In the House of Commons Environmental Audit Committee’s ‘Water quality in rivers’ report concerns are voiced over NH’s performance on acting quickly and efficiently enough in regard to water pollution from run off from the Strategic Road Network.

They also recommend that the Environment Agency require discharge permits for all outfalls on roads with annual average daily traffic above 15,000 vehicles, establishing strict conditions for their management, so as to minimise pollution from run-off.

And of course these concerns are not purely about the impacts to the marine habitat and wildlife, as there are other consequences of these issues, on the natural environment, and to ourselves since water is essential for life.

TCAG would like to thank local nature photographer, Nick Lay, for allowing us to use one of his seal photos, taken in the Thames Estuary near East Tilbury, in our update.