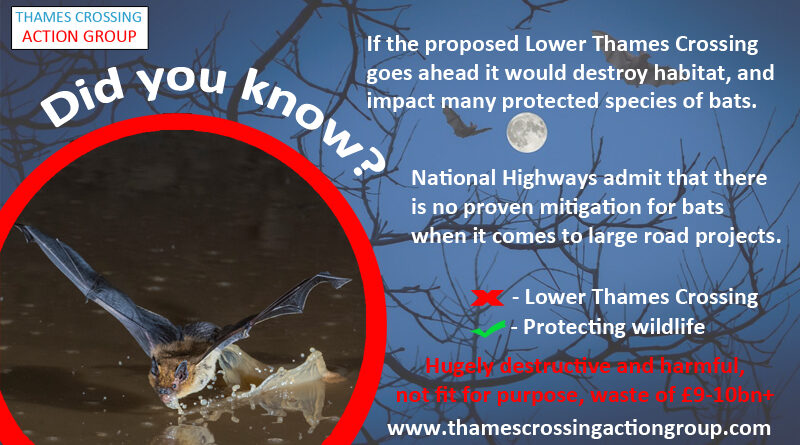 The proposed Lower Thames Crossing would have a big impact on bats, and some locations that would be impacted have an extensive variety of different bat species.  All bat species in the UK are protected species due to the significant decline in numbers of the past decades.

National Highways have to date refused to share details of the wildlife surveys that they have carried out.  They say that info will be made available during the Development Consent Order (DCO) process.  However, the 2018 Statutory Consultation Preliminary Environment Information Report included comments on desk-study data mentioning the following:

It is worth noting that bat surveys only began in 2018, but that the 2020 Design Consultation Environmental Impacts Update does not mention bats at all.

We know through our own surveys and local knowledge that the impact to bats would be considerable.  In one impacted location alone we are aware of an independent bat survey that suggests 7 different bat species are present.  We ourselves have witnessed a number of different species.

At the February 2021 LTC Task Force meeting National Highways presentation included details of bat roosts (where they live) that they had identified to the northern end of the proposed route, around the Thurrock – Havering border. 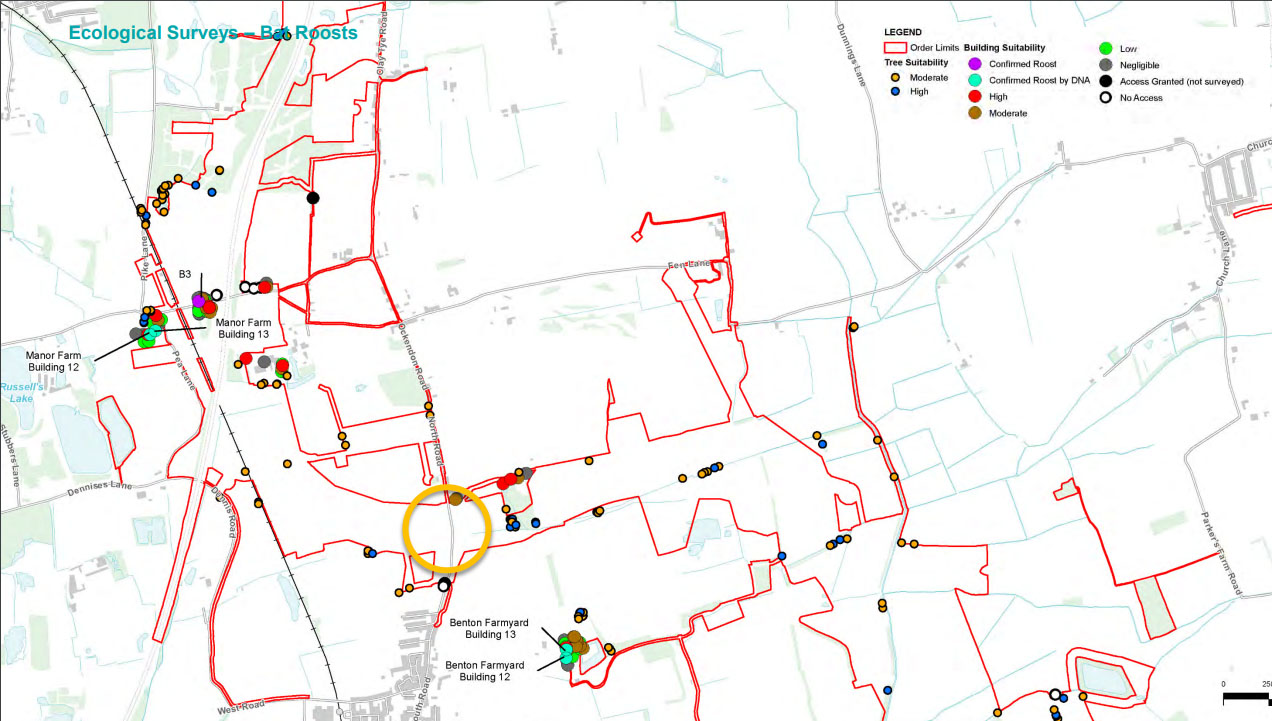 NH acknowledged that there are bat populations in this area both to the north and south of the proposed LTC route (the LTV development boundary is marked in red in the image above).

It is not only the direct impact to bat roosts (that can be in trees, buildings and other structures) that needs to be taken into account, but also their food supply and migratory/foraging routes.

The loss of habitat also results in a loss of other species that bats feed on, thus negatively impacting their food supply. As well as negative impact of light and noise pollution, which again not only impacts the bats but also the species they feed upon, and is not just an issue once the road is open (if it goes ahead) but also through the 6-7 years of construction.

As bats are a protected species, National Highways would, if they are granted permission for LTC, have to get a bat licence from Natural England, and comply with all the necessary requirements prior to construction beginning.

In the presentation NH admitted the proposed LTC would sever the routes the bats take, especially on a north-south route (and vice versa) on this particular area.  There would of course be similar issues in other areas too.

They stated that in this particular area they would look at some kind of infrastructure to help enable the north-south route for bats, although no definitive information was given there is a proposed ‘green bridge’ in North Road that would cross the LTC in that area.  But it is important to remember that whilst ‘green bridge’ sounds nice and natural the reality is a lot different, and this is already a very busy road with HGVs and double decker buses as well as general traffic.  Plus how will the bats know that there is a ‘green’ bridge for them to use and where it is?

We have also heard that culverts (tunnels under the road) on other road projects have been ineffective as mitigation, as they have flooded.

However, on other road projects National Highways have admitted during DCO examination that “The evidence base for the effectiveness of the mitigation that we are recommending simply isn’t there and this is an industry-wide issue, not project specific.”

There has also been growing evidence from projects like the Norwich Northern Distributor Road that bat gantries (which are pylon and netting structures) have not been effective mitigation.

We have contacted Natural England to ask why bat licences are granted when there are no proven effective mitigation measures for bats when it comes to road building.  We know they are under a lot of pressure and have limited resources, but we will update here as and when we receive a response.