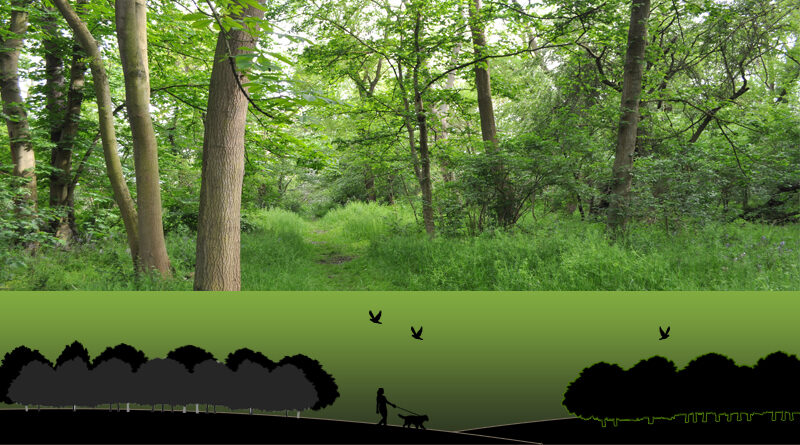 Don’t believe all you read in Highways England’s press release today (June 2nd 2021) about an HE community woodland, a copy of which can be viewed at the bottom of this update. 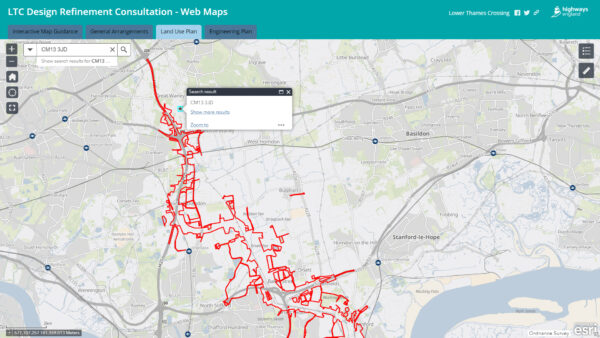 However, take a look at HE’s own interactive LTC map – https://arcg.is/0LSu4L

Use the Land Use tab and search for the postcode of the proposed community woodland postcode CM13 3JD.

As you can see the LTC development boundary goes all the way up to junction 28 on the M25.

However, the proposed community woodland at Hole Farm does not fall within the LTC development boundary. 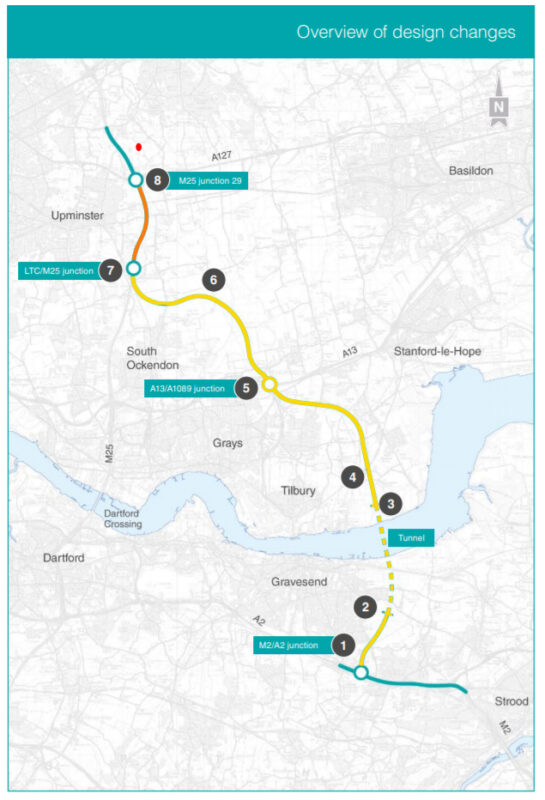 And also take a look at the Highways England’s map of the proposed LTC route.  We’ve marked the location of the proposed community woodland with a red circle (towards top left corner).

HE usually refer to the proposed LTC route as being from the A2/M2 in Kent through to the M25 near South Ockendon, this is highlighted in yellow on the map to the left.

The LTC plans would also see a new parallel road that would run from there parallel to the west side of the M25 up to junction 29 on the M25 where it meets the A127, marked in orange on the map to the left.

The section north of where number 8 is marked is the M25.

Clearly this community woodland doesn’t fall within the LTC development boundary.  Neither is it alongside the LTC.

If HE consider this proposed community woodland to be alongside the LTC then maybe they should start describing the LTC as being a route from the A2/M2 through to north of Junction 29 on the M25, and even mentioning that the LTC development boundary goes all the way up to Junction 28 on the M25!

This is also yet another example of HE trying to mislead people, and trying to give the impression that this community woodland is associated with the proposed LTC, when clearly it isn’t.  It is not within the LTC order limits/development boundary, it is not an official form of mitigation for LTC as that would have to fall within the development boundary and DCO application, and HE even state in the press release that the community woodland “will go ahead regardless of consent being granted for the Lower Thames Crossing“.

How can they also state “The woodland at Hole Farm near Great Warley in Essex is at the heart of the projects plans to boost the wildlife and increase habitats in the area.” when it isn’t even part of the LTC project?

It is stated that community woodland is 100 hectares, and then Matt Palmer (Exec Director LTC) states “Elsewhere along the route, another 260 hectares of new woodland will be planted bringing the total to 360 hectares” again trying to mislead people into believing that this additional community woodland should be considered as part of the LTC project, when in reality it is not.  Sadly we experience this kind of misleading presentation of info by HE all too often.

It is also worth noting that the proposed LTC would destroy woodland, including ancient woodland along the route from Kent through Thurrock and up into Havering and Essex.  For example Thames Chase Community Forest which is actually a community woodland created in response to the M25 when that was constructed, and now that is under threat from the proposed LTC.

Or The Wilderness in South Ockendon, a beautiful and ancient woodland that dates back hundreds of years, that would be destroyed by the proposed LTC.

Again hardly gives the impression of HE caring about woodland and nature does it?  And that’s just one example of how destructive the proposed LTC would be, there is plenty of other evidence of how the LTC would destroy not only woodlands, but also homes, lives, health, greenbelt, solar farms, the environment, wildlife and habitats, countryside, communities and so much more.

We’re all for tree planting, as long as it’s the right trees in the right place.  But this would also see a large loss of yet more valuable agricultural land in the area, at a time when we need to be more self-sufficient especially with our food supplies and reducing the carbon footprint of our food.  The proposed LTC would destroy a lot of agricultural land, including grade 1 listed land.

In our opinion, this is clearly a case of you can’t always believe what you read, and another example of HE again attempting to mislead the public.

Highways England have clearly experienced quite a bit of negative press about the proposed Lower Thames Crossing, especially since they had to withdraw their Development Consent Order (DCO) application late last year, failed to resubmit it within their self set time frame of early 2021, which is now currently planned to happen towards the end of 2021.  Had they not have withdrawn the application the Planning Inspectorate were due to refuse it.  They are also going to be holding another round of LTC consultation, commencing in July, following reports of inadequate consultation previously from various sources.  To us this latest news and attempts to try and associate the LTC with this community woodland is misleading and clearly a case of greenwashing in our opinion.

We took part in various interviews about this, including for BBC and ITV News.

Unfortunately the BBC interview was only available online to watch again for around 24 hours after the interview aired on BBC Look East, and cannot be shared on our website due to BBC copyright.  We actually invited the BBC crew to film our interview at The Wilderness, to show just some of the ancient woodland that would be destroyed by the proposed LTC if it goes ahead.  You can read more about The Wilderness and see some more video footage and photos of this beautiful woodland here, and find out more about LTC impacts to woodlands and ancient woodlands here.

However, ITV News have very kindly given permission for us to share a copy, big thanks to James Dunham.  The ITV interview aired on ITV Anglia, ITV London, and ITV Meridian.

We were also invited to speak on BBC Essex Radio with Emma Bullimore (who’s sitting in for Sadie Nine).  A Highways England rep was also interviewed.  You can list in to it online from around 3:08:30 at www.bbc.co.uk/sounds/play/p09jfqdn.

And for after that link is archived you can listen below:

Copy of the HE press release

Highways England has today (Wednesday 2 June) announced a new woodland the size of 135 football pitches will be planted in partnership with Forestry England, alongside the route of the proposed Lower Thames Crossing.

The woodland at Hole Farm near Great Warley in Essex is at the heart of the projects plans to boost the wildlife and increase habitats in the area. Under Forestry England’s care, the 100-hectare site will become home to around 150,000 new trees and provide homes to thousands of native species, from mammals to invertebrates and birds to fungi.

The green space will be designed for people too, and could include facilities such as a café, education centre and a community orchard. A range of provisions for outdoor activities are also being considered, and new public paths may link to a footbridge across the M25 to create an uninterrupted walking and cycling route between other nearby woodlands, such as Folkes Lane Woodland, Thorndon Country Park and the wider area of the Thames Chase Community Forest.

Forestry England will carry out a consultation later this year to seek the public’s feedback on plans for the site.

The new community woodland is part of Highways England’s commitment to increase biodiversity along England’s Strategic Road Network by 2050 and will go ahead regardless of consent being granted for the Lower Thames Crossing.

“We know how important high-quality, local greenspace is to people as well as the country’s ambition to plant new woods and forests. We have been creating and managing community woodlands for decades and are excited to be working with Highways England and looking forward to hearing from the local community. This will become a great addition to the nation’s woodlands.”

“The Lower Thames Crossing is the most ambitious road scheme in a generation, because as well as improving your journey and supporting 22,000 jobs, it will enhance the natural environment and leave a positive green legacy for our neighbours.  We want the new crossing to be the most environmentally sustainable road ever built in the UK.

“The plans for Hole Farm community woodland are part of our commitments to increase biodiversity alongside our major routes and I look forward to working with Forestry England to create a green space for the whole local community to enjoy for generations.”

The new woodland complements the project’s existing environmental initiatives that will enhance and connect habitats across the area. This will be achieved by returning farmland along the proposed route to semi-natural habitats including species-rich grassland and wildflower meadows.

Elsewhere along the route, another 260 hectares of new woodland will be planted bringing the total to 360 hectares, and the project will significantly increase the number of ponds, watercourses, and hedgerows in the area. These areas will be connected by seven new green bridges and 42km of new pathways, allowing people to easily move around and enjoy the open spaces in the area.

The site will be managed by Forestry England, the country’s largest land manager, on behalf of Highways England. Forestry England is supporting the government’s target of planting 30,000 hectares of new woodland every year by 2025 to help deliver ambitious plans to become net-carbon zero by 2050. The new green space will be the largest community woodland in the East of England.

Highways England plans to resubmit its application for a Development Consent Order later this year. An application was originally submitted to the Planning Inspectorate in October 2020 but was withdrawn following early feedback from the Inspectorate on the application.

Visit highwaysengland.co.uk/lowerthamescrossing for more information on this project.

To keep up to date with the latest travel information follow @HighwaysEast on Twitter or visit www.highwaysengland.co.uk