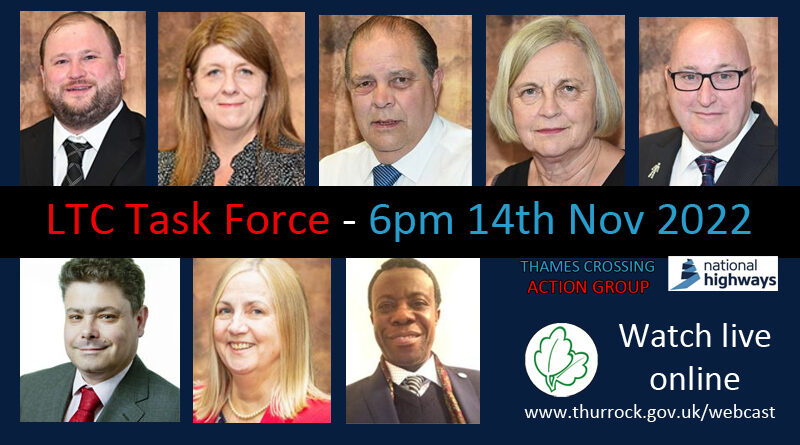 The November 2022 LTC Task Force meeting took place on Mon 14th November, the agenda for this meeting can be found here.

The meeting was webcast live and has also been shared on the council’s YouTube channel (we’ve embedded a copy below), and our update covers some of the highlights.

The November meeting was a relatively short meeting, because unfortunately a councillor had to leave the meeting due to illness, and with so many other apologies from councillors there were not enough councillors present to be able to continue the meeting with full decision making and recommendation powers.

The minutes of the previous meeting were discussed and approved prior to the councillor needing to leave. A verbal update on the LTC Development Consent Order (DCO) application being submitted on 31st October, and the DCO process generally was given by officers.

You can find out more about the process here on our website, with an updates index also here.

It was clarified that the DCO application documents are now available on the Planning Inspectorate (PINS) website.  Also that PINS have until 28th Nov 2022 to consider and decide whether to accept the application for examination or not.

Whilst the full verbal update on Thurrock Council’s Adequacy of Consultation representation could not be presented in the meeting to seek approval from committee members, due to there not being enough councillors present for the committee to make recommendations, members were provided with a briefing prior to the meeting, and a written recommendation from Task Force has been provided to support the representation.

All the host Local Authorities have until 16th Nov 2022 to submit their Adequacy of Consultation representations, and these will be published publicly on the PINS website, if the application is accepted.

Having been briefed about the Adequacy of Consultation in the pre-meeting brief, TCAG Chair, Laura Blake, has thanked the officers and team for all the time and hard work they have put in on creating such a strong representation.

The TCAG Inadequacies of LTC Consultation representation has also been submitted to the host Local Authorities, PINS, and copied to local MPs too.