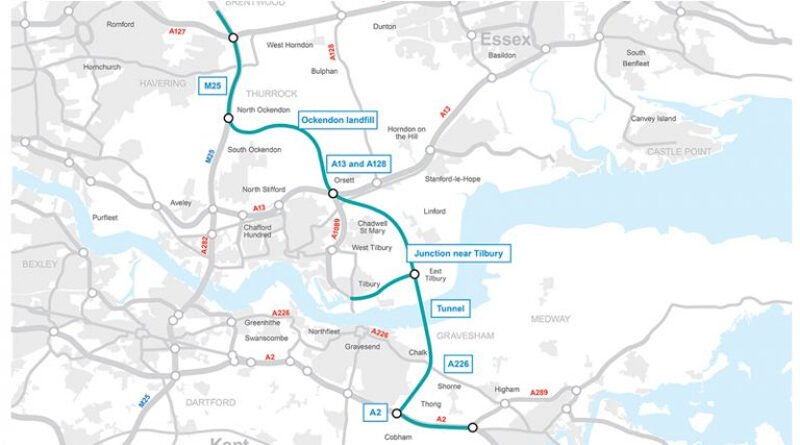 Why did Highways England remove the Tilbury Link Road from the proposed Lower Thames Crossing?

Let’s start at the beginning of why it was added to the LTC project.

Port of Tilbury only ever agreed to support the proposed LTC route if they got a direct connection/junction to it, the Tilbury Link Road.  But once HE got their choice of route announced as the preferred route in 2017 they removed the Tilbury Link Road from the LTC project.

When HE removed the Tilbury Link Road they stated it was because there wasn’t a need to it. Yet we know they are still progressing with the Tilbury Link Road as a separate stand alone project.  It was detailed in the Road Investment Strategy 2 (RIS2) report as a pipeline project for RIS3 period which will run from 2025-2030.  This is also something that Thurrock Council are involved in discussion on, and support.

Our opinion of this is that this allowed HE to reduce the overall cost of LTC, by removing the Tilbury Link Rd from the scheme, and thus making the cost and Benefit Cost Ratio for LTC look better than it truly is, due to it being moved sideways as a separate project. A false economy, and a very sneaky way to have gotten the support of the Port of Tilbury for the proposed route. And that gets even worse when you consider how much more it would cost to add it at a later date and all the necessary additional works that would be needed.

And it’s not just the financial impacts of removing the Tilbury Link Road that should be considered, there’s also the impact it would have on traffic movements, congestion and pollution.

If the LTC goes ahead traffic using the LTC would not be able to access the A1089(south) which is the route down to Tilbury including the Port of Tilbury, without having to detour all the way down to Stanford, using what is now known as the Stanford Detour.

Because of this detour it not only would affect the Port of Tilbury, it would also impact the Thames Freeport, as well as us all of course due to the negative impacts it would have on the existing road network and our communities and health and wellbeing.

The map below can be clicked to enlarge, and shows where HE had proposed the link road.

We believe HE added the Tilbury Link Road into the LTC project purely to garner support of the route option from the Port of Tilbury, and then removed it once the decision was made to go with their preferred route. This also reduces the cost of LTC and makes the benefit cost ratio appear better than it truly would be.

HE are not taking into account the proposed London Resort theme park into account with LTC traffic modelling data, which would also have an impact of the Tilbury area.  The removal of the link road inflicts the Stanford Detour which would mean more congestion and pollution.  That said we still remain of the opinion that the whole proposed LTC is not for purpose and strongly oppose it.