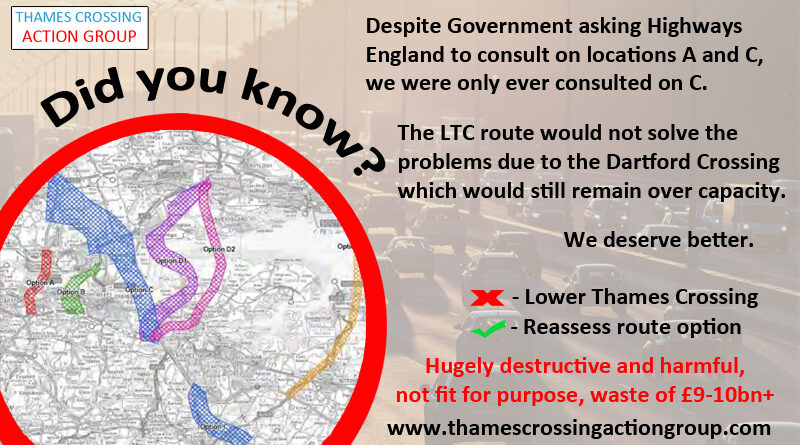 Back in 2009 the Department for Transport (DfT) carried out a study of route options for a new crossing. Due to increasing demand at the Dartford Crossing, the DfT looked at options for an additional crossing at five potential locations (A, B, C, D and E). 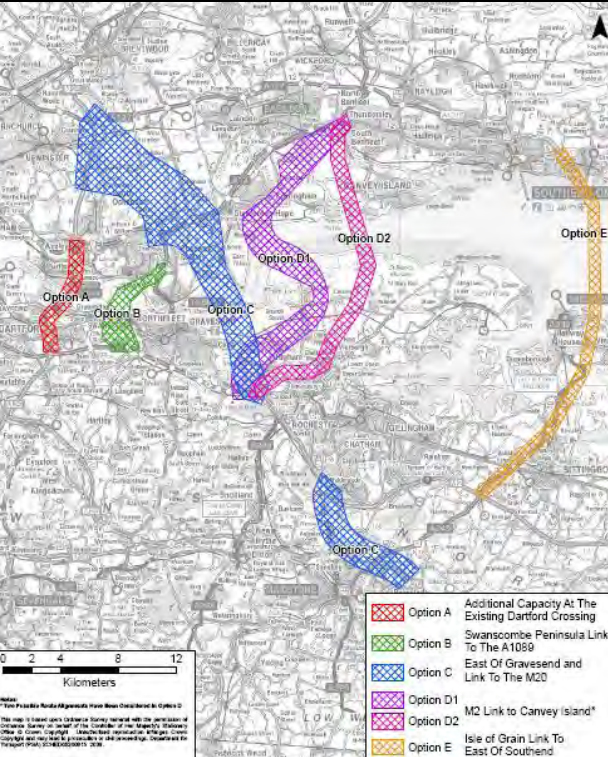 Notice how at this stage Option C includes a link to the M20 via Blue Bell Hill (A229), shown in blue on the map above.  This was known as the C variant.  This link was not deemed by National Highways to be necessary for the LTC project and was ruled out, along with many other options.  However, Kent County Council are now progressing Blue Bell Hill improvements, as a direct result of the proposed LTC.

The two furthest east (D and E) are ruled out as they are too far from the existing crossing. Rail is also ruled out.

In 2012 the Government department began assessing a number of options at each of the remaining locations, A, B, and C.

In 2013 the Government held a public consultation which looked into the need for a new crossing and asked for opinions on the possible locations.

Later in the year Government announced location option B (between Swanscombe Peninsula  and the A1089) had been ruled out because of the impact on local development plans and the limited transport benefits. Note this was in the vicinity of the proposed London Resort theme park.

In July 2014 the consultation results were published confirming the need for a new crossing, but without any consensus about where it should be.

In 2016 Highways England (as they were then known) carried out a route options consultation after having carried out further assessments at the Government’s request.

Despite the fact the DfT asked HE to consult on Locations A and C, the public consultation asked for feedback on proposals at location C, including 3 routes north of the river in Thurrock and Essex, and two south of the river in Kent.

Route options at location A, such as Option A14 a preferred route of many members of the public, were not even included in the consultation.

In 2017 then Secretary of State for Transport, Chris Grayling MP announced that the Government’s preferred route was Option C3.

Prior to the preferred route announcement the Port of Tilbury had publicly voiced that their support of Option C3 was subject to it including a junction/connection for the port.  Maps started being published of Option C3 showing what is known as the Tilbury Link Road.  National Highways then went on to remove this junction/connection.  However, Tilbury Link Rd has featured as a Road Investment Strategy (RIS3) pipeline project, meaning it is being considered to be progressed as a separate stand alone project in it’s own right.

TCAGs thoughts of the route options

As is highlighted above we believe that there has never been an adequate consultation on route options, since the route options consultation in 2016 did not include options at location A, which is what the Government had instructed Highways England to do.

The Port of Tilbury clearly only supported Option C3 (what is now the proposed LTC) if they were to get their own junction/connection, which is no longer part of the LTC project.

In the latest 2022 Local Refinement Consultation National Highways (previously Highways England) have started commenting on the need for compensation land near Blue Bell Hill due to nitrogen deposition from LTC associated traffic.  If the traffic impact due to the LTC is so bad (which of course it would be as traffic from the ports in the south would use the M20 and then use Blue Bell Hill to cut through to the M2/A2 to reach the LTC to cross the river) you have to ask why the C Variant that included Blue Bell Hill was ever ruled out?

With both Blue Bell Hill improvements and Tilbury Link Road, as well as a Rest and Service Area (that was added and then removed from the LTC project) all being progressed as stand alone projects as a direct result of the LTC, as well as many other works that would be needed on the existing road network as a direct result of the proposed LTC, we also question the false economy of the £8.2bn LTC.

TCAG strongly believe that there is a strong need and case for reassessment of the route choice, especially since the proposed LTC would be hugely destructive and harmful, would not solve the problems at the Dartford Crossing (which would remain over capacity), and is not fit for purpose.