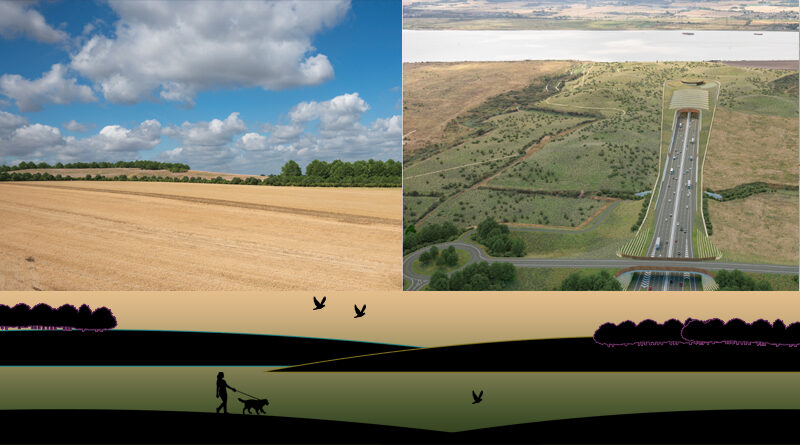 At the Community Impacts Consultation in 2021 National Highways added what they call two new ‘parks’ to the proposed LTC project.  One would be north of the river, called Tilbury Fields, and the other Chalk Park to the south of the river.  The new ‘parks’ may sound nice at face value, but we feel there are some things we should all take into account when considering this aspect of the LTC proposal.

More recently in the 2022 Local Refinement Consultation, NH updated the info on the new ‘parks’, so we’ve updated our info too!

Changes have been made to the proposed Tilbury Fields area, this is due to land conflict between the proposed LTC and future expansion plans for Thames Freeport.  A chunk of what was proposed to be Tilbury Fields has now been removed from the development boundary, and new land added to the eastern side of the LTC.  They say the overall size of the site will remain around 45 hectares.

Drag the arrow slider above across left to right to see what they are proposing now compared to what was being proposed at the last consultation.

The latest proposals include land forms (large man made mounds) ranging from 18-24 meters in height to the south and east of the northern tunnel entrance.  They say the largest mound, at the south-east corner of Tilbury Fields, would feature a star shaped area 22-24 meters above ordnance datum (which means above mean sea level rather than current ground level).  For those not great with gauging of these kind of things, an average double decker bus is 4.95 metres high.

Also consider, land in this area is currently marshes and agricultural land, it is also flood plain.  If this land is built up with these large land forms where will the flood plain water go?  Flooding and flood plains in regard to LTC is an update we have already published before.

Tilbury Fields would be accessible via the Two Forts Way along the river front, and also via Footpath 200 to the north of the site.

But take a look at the paths they are proposing through Tilbury Fields (marked 7 on the map below), spirals, zig zags, and paths running side by side.  We’ve questioned the legitimacy of their claims of providing so many new public rights of way paths, and this just gets added to the list of propaganda.  We’re not buying it, it doesn’t tick the box for us NH. 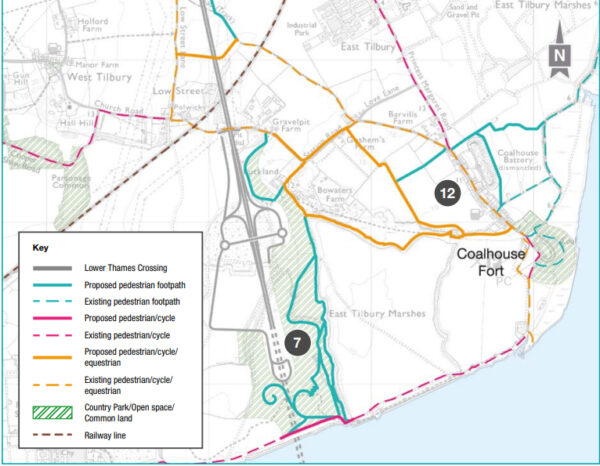 Drag the arrows across the image to see what it looks like now compared to what NH predict it would look like in their Community Impacts Consultation materials. Notice how high they are proposing to dump the spoil from the tunnelling. We felt the need to question NH on this, since in the latest consultation guide it states on page 40 that “The existing ground level would be maintained...”  Clearly from their own images that would not be the case because of the new landscaped earthworks.

NH’s response when question was to state:

“Chalk Park will be created using spoil volume taken from the Gravesend cutting (the tunnel spoil will be going to the Tilbury side only). The total volume of spoil used to create Chalk Park will be 2,000,080m³ for the current design. The proposed height will be approximately 15m above existing ground level“.  Make of that what you will, but for us it just goes to show how misleading and inadequate their consultation materials are.

Whilst NH state this park would be on the site of the Southern Valley Golf Course, when you look at the map this park also appears to be proposed on what is currently agricultural land too.  They say it would include areas of woodland and species rich grassland, a more diverse habitat than returning to farmland. But surely everywhere would have more diverse habitat and be healthier for us and nature without the LTC?! 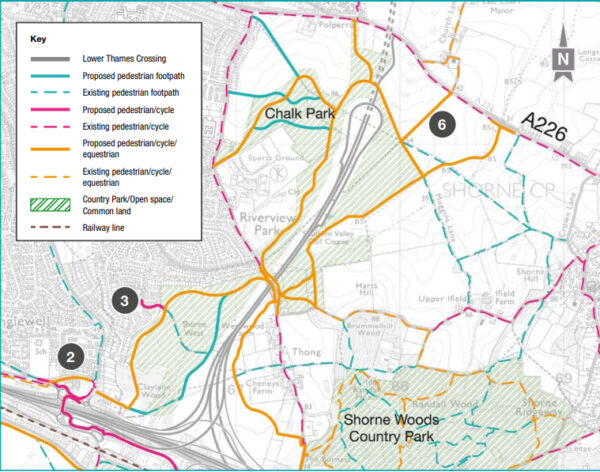 To us both of these ‘parks’ sound very much like greenwashing of the LTC.  NH admit that they are dumping the spoil in these ‘parks’ to reduce the amount of spoil that would need to be moved on the roads.  At first glance this could be considered a good thing, but when you start weighing up the fact that NH need to attempt to reduce their carbon emissions for LTC, and it makes the job easier to dump it as close to the tunnel portals as possible, you have to ask yourself are these really parks for the people, or are they just to suit the needs of NH?

Who wants to spend time in parks next to a busy road like LTC?  Time spent next to polluting roads is not good for anyone. Remember NH are not including air filtration in the LTC tunnels, so all the pollution would come straight out into these ‘parks’.

Agricultural land and flood plain would be destroyed and lost, which would have negative impacts for the farmer and also the environment.  Now more than ever we need the miles our food travels to be as little as possible, we shouldn’t be destroying agricultural land and increasing the carbon footprint of our food supplies even more.

The way NH keeps using the terminology of ‘open space’ gets to us too, if you already have open fields then the space is open and can only be more open without a huge road like LTC running through it, stop trying to make out you’re magically creating some new space NH we’re not buying it.

We also question the impacts to nature and wildlife, because after all while NH are suggesting this is ‘new open space’ and all the other greenwash they imply, these areas will already have their own biodiversity, and there is no doubt to us that a huge new road like LTC is not positive for the wildlife, environment or any of us.  Dumping huge amounts of spoil and changing habitats is not necessarily a good thing for wildlife or the habitats, marshes, flood plains etc.

So let’s not get caught up in NH’s greenwash, and instead remember it suits NH greatly to dump all their spoil so close to the tunnel portals.  The reality is that LTC would do more harm than good