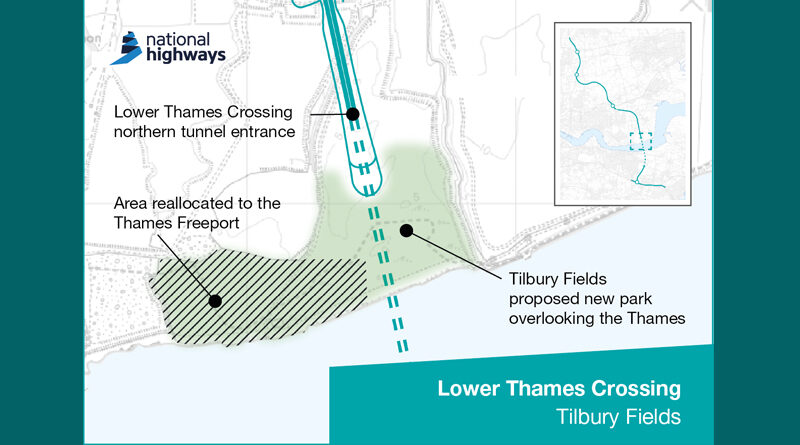 We knew from Thurrock Council’s consultation response that there were questions being asked about land conflict between LTC and Thames Freeport, and today (11th Nov 2021) National Highways/LTC have finally issued an update and press release about it. 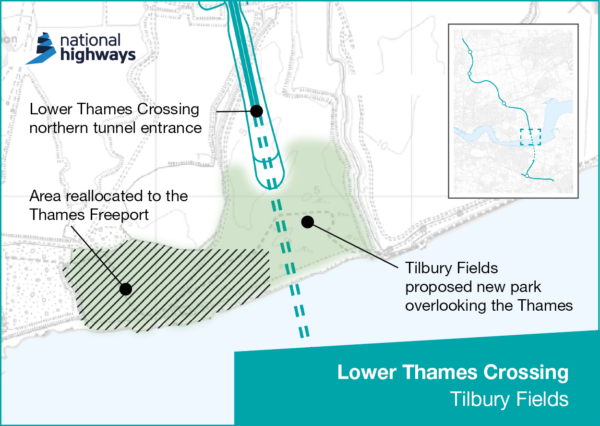 Both the LTC and Thames Freeport are considered National Significant Infrastructure Projects (NSIPs) so both are deemed by Government to be important to the nation.

The thing to remember is that a Freeport needs to be near to the water, by their very nature.  Whereas Tilbury Fields is proposed as mitigation for LTC.  Remember National Highways refer to Tilbury Fields (and Chalk Park) as new ‘parks‘.  Whilst being sold as new ‘parks’ the reality is they would be convenient dumping grounds for the spoil from the LTC tunnelling.

…it will change its proposed use of the river frontage, to ensure the Freeport’s potential is not impacted by the Lower Thames Crossing scheme. Working with the Port of Tilbury and Thurrock Council, National Highways will be considering an update to the land use in the local area so that it can provide the new Tilbury Fields public park and environmental mitigation, as well as ensuring the river frontage can be maximised for the benefit of the Thames Estuary.

They have also said they will be using the additional time required to revise their Tilbury Fields proposals to consider further improvements to the proposed Lower Thames Crossing plans following its Community Impacts Consultation held earlier this year.

They have said revisions to the Tilbury Fields proposals and any further changes to the Lower Thames Crossing plans will be shared with communities and stakeholders.  Whether the revisions will result in a further round of consultation remains to be seen, but we do know that any significant changes should warrant consultation, which would delay them even further.

The original attempt to submit the DCO application in Oct 2020 was withdrawn in Nov 2020 as the Planning Inspectorate (PINS) were due to refuse the application.  At the time National Highways (known as Highways England at the time) said they planned to resubmit their application in early 2021.  This was then pushed to late 2021 due to further consultation, which has now moved into 2022.

What else have they said

In the press release there is mention that National Highways are also in discussions with the Department for Transport, Thurrock Council, Port of Tilbury, and London Gateway, on what further changes to the strategic road network are needed to support growth ambitions for the area.

They have also proposed to take on Thurrock Council’s responsibility for operating & maintaining the A13 east of M25. This would allow National Highways to provide support to London Gateway traffic from the M25 and the future Lower Thames Crossing if it goes ahead.  It’s no secret that the proposed LTC would create what has become known as the Stanford Detour, which would put additional pressure on the A13 and Stanford/A1014 junction.

There is also mention of progressing the Tilbury Link Road due to the Freeport status being awarded increasing the importance of such a link road.  Since the Tilbury Link Road was originally part of the LTC project, we still question why it is being progressed as a separate stand alone project, rather than being part of the LTC project.  After all you can’t have a ‘link’ road unless the LTC goes ahead, as without LTC there is nothing there to link to!

We can only assume it has something to do with attempts to manipulate the cost and benefit cost ratio of the LTC project to make it look better than it truly would be if all aspects and costs associated with the LTC project had to be included in the LTC project cost.

What we’d heard prior to the press release 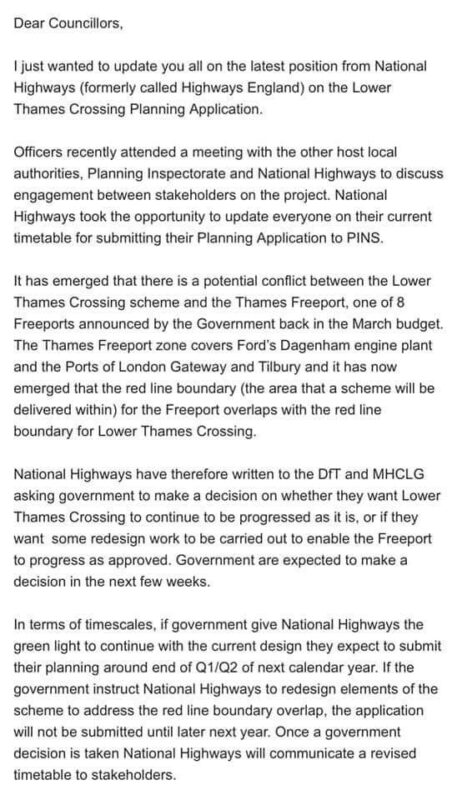 As soon as we saw this update we contacted National Highways/LTC to ask for further clarification, we specifically asked whether they had written to the DfT and MHCLG and received a reply telling us they hadn’t.

We had also contacted all the Local Authorities, including Havering Council, who should have been in attendance at such a meeting between National Highways, Local Authorities, and the Planning Inspectorate (PINS) asking for further clarification of what happened at the meeting, since there seemed to be a serious contradiction of information.

Havering Council kindly responded to us yesterday and confirmed

It is our understanding based on what we heard at the meeting that National Highways had already written to the DfT and MHCLG concerning the matter of the land conflict.

We were considering how best to proceed, as to us it seemed that either National Highways had not been completely honest with us, or it seems had mislead those in attendance at the meeting.  We question everything as after all this is not the first time National Highways have been called into question over their coverup culture.

And then today National Highways issued their press release.