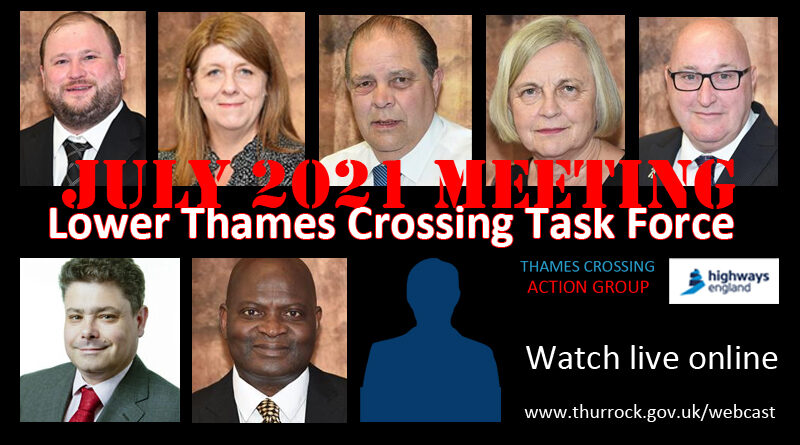 Whilst TCAG were not in attendance at the July 2021 LTC Task Force meeting (click here for the reason why), we most definitely tuned in to watch the live webcast of the meeting.

Highways England were in attendance virtually, supposedly to give an update on the LTC Community Impacts Consultation, which starts on Weds 14th July and runs 8 weeks until Weds 8th of September 2021.

The slide show that accompanied the HE presentation was sent to LTC Task Force committee members at 3pm on the day of the meeting, which started at 6pm.  TCAG reviewed the presentation before the meeting and sent out initial reactions, comments, and some questions through to the LTC Task Force Chair, Cllr Fraser Massey, and Vice Chair, Cllr John Kent.

The meeting is available to watch again online, and we’ve popped a copy of the presentation slide show just below:


Please note this presentation slide show has now been updated to the one used in HE’s presentation. The copy committee members were originally provided before the meeting had less slides than the one HE used in the meeting.  This updated version was emailed through to us late this afternoon (13th July 2021). It has 41 as opposed to 38 slides that we were originally sent.

In their presentation HE advised that the purpose of the consultation is to provide more detail on their construction and construction mitigation, set out more info about their environmental mitigation for the permanent works, and to demonstrate changes to their proposed utilities works and the mitigation.

They advised that all consultation materials will be available online via their consultation website which will launch at 00:01 on Weds 14th July 2021.

They say they will hold a series of carefully managed in-person events that will comply with any necessary COVID restrictions. We have already commented on the fact that certain areas that would most definitely be impacted by the proposed LTC are not listed to have public information events as part of the consultation.  These include Chadwell St Mary, Stanford/Corringham, Tilbury, and anywhere to the west of the borough. (There is a notable lack of events in other areas outside of Thurrock, but Task Force is Thurrock specific as it is a Thurrock Council run meeting)  This point was picked up by many of the councillors, and when pushed HE have agreed they will go away and see if they are able to arrange anything and will advise in due course.

There will also be online webinar events.  A telephone surgery whereby people can phone and ask questions.  After questioning HE confirmed the phone number for this would not be a freephone number, but a local charge rate number, meaning people will have to pay to call.

Consultation materials will include

HE’s ‘You said, we did’ section

HE gave a summary of the key themes that they say came out of the Statutory, Supplementary, and Design Refinement Consultations.  Key themes are topics that they decide are key common themes across all the responses they received.

The presentation then gave four examples of ‘You said, we did’ which is where they tell us what we said at consultations, and then what they did in response.

Judging by the four examples given we feel this section would be better titled, ‘You said, we pretended to listen, and then did nothing anyway’.

HE mentioned this site in the Blackshots area, it’s between Stifford Clays and the Baker St end of Orsett to help you identify the imagery in the slides a bit quicker.

The confusing things was HE trying to explain how they are proposing providing replacement open space in this area.  Our response would be how can you replace open space that is already there by adding a whacking great road through it?

HE are proposing creating a ‘park’ along the River Thames by Coalhouse Fort.  You are probably already familiar with the fact they are proposing land-form (think man made hill) between the river and the tunnel portals.  They say they are now proposing that this would be increased in height.  We will be seeking confirmation on exactly how high, as measurements in the slide show are ‘Above Ordnance Datum’ which is not straight forward as just being how high it is above the current ground level.

They spoke about creating a new path all the way from Tilbury through to Stanford along the river (page 29/38).  Our belief is that it is already possible to walk this route on existing paths.

They went on to talk about proposed raised earthworks in the area that say would be a feature, to help reduce wind along the river, and for wildlife (page 35/38).  You can see artists impressions etc in the slide show, but think of a kind of geometric maze through raised mounds.  We love nature, but to us this just appears to be an easy opportunity for HE to dump more of the tunnel spoil as close as possible to where they drill it out from, and pretend they’re doing something green.

We also question the impacts putting so much raised ground between the river and the flood plains would have on future flooding if it were to go ahead.  HE suggested it would not make any difference as it is already raised along the river there, but we’d argue that it is not raised as high as they are proposing, plus any raising of the land will have impacts in one way or the other.  Not to mention the impacts it will have on the flora and fauna that currently exist in the current marshlands in the area.

After HE had given their presentation on the consultation, we were given an update on the HEqIA. The basics to come out of that seem to be that things are still being worked on and progressed, and it will still likely be months until we are able to have the kind of level of detail we need.

We have been advised previously that things had been moving very slowly, due to HE’s lack of communication, nothing new there then sadly.  But more recently we had been told that they were giving the impression they would now start being more helpful, but obviously there is a lot of lost time to make up for.  CIPHAG meetings have now resumed so we can only hope that we will start getting more information starting to come through to us.

But with info as important as health and equalities impacts that info can’t come quick enough.

We would echo what Cllr Sara Muldowney was questioning as to when we might have info for residents about the realities of the impacts the LTC would have on our health. Plus, how can we all give meaningful response to the consultation without that kind of info, to know what the true impacts would be on our health?

It seems the reality is that we simply won’t have that kind of info until after the consultation has ended.  In the meantime we would recommend people comment with their thoughts and concerns in their consultation responses as best you can, and comment on the lack of information available.