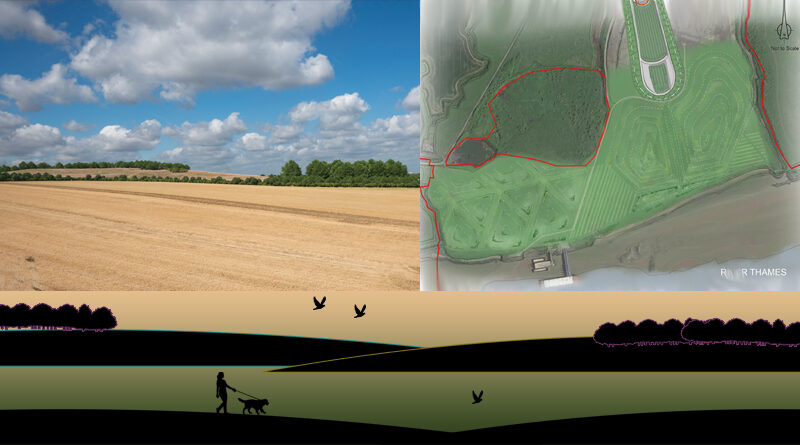 At the Community Impacts Consultation Highways England have added what they call two new ‘parks’.  One would be north of the river, called Tilbury Fields, and the other Chalk Park to the south of the river.

This may sound nice at face value, but we feel there are some things we should all take into account when considering this aspect of the LTC proposal.

HE are proposing this park around the area of the proposed northern tunnel portals of the LTC.  HE say it would be approx 45 hectares.

HE had previously proposed a land form around the northern tunnel portal. The figure previously suggested for the height of this raised man made mound was 16.5m above the ordnance datum level (height of the mean sea level).

However now HE are proposing the add more land forms in this new ‘park’ and raise them up to 22.5 metres (that’s over 73ft high).  We checked the height of an average double decker bus, and it’s 4.95 metres (16 ft 3 in) high.  That means what HE are proposing for this land form is a high as approx 4.5 double decker buses stacked upon each other.  This is of course above ordnance datum level, but HE fail to explain what the height would be in real terms that we can all understand as to exactly what to expect.

Now take a look at the images HE provide to show us what they propose the northern portal will look like facing south.  Does the image that shows LTC really give a clear impression of exactly what is being proposed when you consider the height of 4 and a half double decker buses?

Also consider, this land is currently agricultural land, it is also flood plain.  If this land is built up with these large land forms where will the flood plain water go?  Flooding and flood plains in regard to LTC is an update we have already published before.

HE admit that they would be using tunnel spoil to make these landforms, which would also conveniently make their carbon emissions figures better to suit their own needs to trying to push through a hugely destructive project. Do we really believe the ‘parks’ have been added for the benefit of the people, or is it to suit the needs of HE? 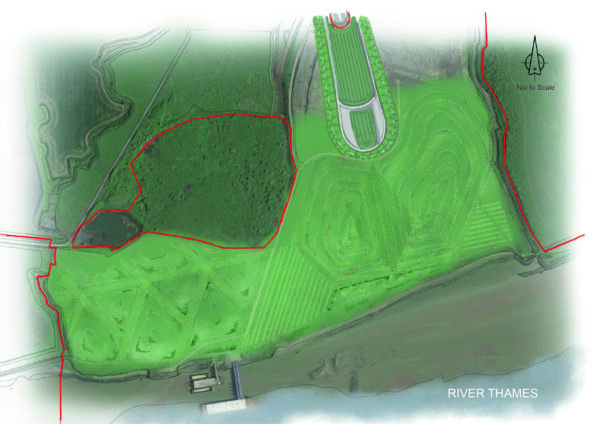 In their presentation (page 30/41) at the July meeting, which was to brief us on consultation, there was mention of potential for a coastal footpath in the vicinity of the northern tunnel portal.  They said it would run along the River Thames from Tilbury Fort and the Thurrock Thameside Nature Discovery Park. The thing is we already know that route already exists, with the main section of it known as the 2 Forts Way between Tilbury Fort and Coalhouse Fort. Not the first time HE have attempted to suggest a ‘new’ path where one already exists, we’ve seen it when they’ve detailed Public Rights of Way in regard to the LTC.

HE say this is being proposed on part of the Southern Valley Golf Club site, which would be permanently acquired, and would cover an area of 38 hectares approx.

Drag the arrows across the image to see what it looks like now compared to what HE predict it would look like. Notice how high they are proposing to dump the spoil from the tunnelling.

Whilst HE state this park would be on part of Southern Valley Golf Course, when you look at the map this park also appears to be proposed on what is currently agricultural land too.  They say it would include areas of woodland and species rich grassland, a more diverse habitat than returning to farmland. But surely everywhere would have more diverse habitat and be healthier for us and nature without the LTC?!

To us both of these ‘parks’ sound very much like greenwashing of the LTC.  HE admit that they are dumping the spoil in these ‘parks’ to reduce the amount of spoil that would need to be moved on the roads.  At first glance this could be considered a good thing, but when you start weighing up the fact that HE need to attempt to reduce their carbon emissions for LTC, and it makes the job easier to dump it as close to the tunnel portals as possible. You have to ask yourself are these really parks for the people, or are they just to suit the needs of HE?

Who wants to spend time in parks next to a busy road like LTC?  Time next to polluting roads is not good for anyone.

Agricultural land and flood plain would be destroyed and lost, which would have negative impacts for the farmer and also the environment.  Now more than ever we need the miles our food travels to be as little as possible, we shouldn’t be destroying agricultural land and increasing the carbon footprint of our food supplies even more.

The way HE keeps using the terminology of ‘open space’ gets to us too, if you already have open fields then the space is open and can only be more open without a huge road like LTC running through it, stop trying to make out you’re magically creating some new space HE we’re not buying it.

We also question the impacts to nature and wildlife, because after all while HE are suggesting this is ‘new open space’ and all the other greenwash they imply, these areas will already have their own biodiversity, and there is no doubt to us that a huge new road like LTC is not positive for the wildlife, environment or any of us.  Dumping huge amounts of spoil and changing habitats is not necessarily a good thing for wildlife or the habitats, marshes, flood plains etc.

So let’s not get caught up in HE’s greenwash, and instead remember it suits HE greatly to dump all their spoil so close to the tunnel portals.  The reality is that LTC would do more harm than good.

HE community woodland nothing to do with LTC – click here