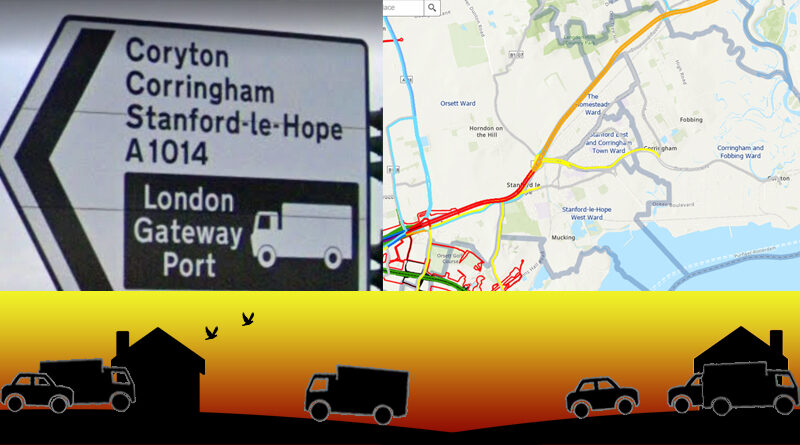 Surely in a Community Impacts Consultation the Ward Impact Summaries should cover the communities that would be impacted as a result of the proposed Lower Thames Crossing (LTC)?  Shouldn’t that include the LTC impacts to Stanford/Corringham?

We think so, but clearly Highways England (HE) do not agree.  There is a notable absence of a Ward Impact Summary for the Stanford and Corringham wards, who would most definitely be impacted as a direct result of the proposed LTC for various reasons, including the Stanford Detour.

We questioned HE about this lack of ward impact summary and received the following response.

“As regards the Ward Impact Summaries, we have included all of the wards where any part of the Order Limits falls within them or that are next to the Dartford Crossing. Stanford-le-Hope West and Stanford East and Corringham Town wards do not include any part of the Order Limits so are not included in the Ward Impact Summaries. Information about impacts on the wider area are provided in the consultation materials, including in the Operations Update and the Construction Update.“

As well as having to wade through for yourself to try and find out what would impact the area, due to the lack of a Ward Impact Summary for your ward, you may choose to try using CTRL+F or Command+F.  But you would need to be aware that on numerous occasions HE have actually spelt Stanford wrong. We’ve seen Stamford and Standford variations, some of which are errors from previous consultations that we reported and still haven’t been corrected.

LTC impacts to the Stanford/Corringham area

Check out the LTC interactive map and select the Traffic layer to view the predicted traffic increase in the area if the LTC goes ahead.  You will see the predicted figures and percentages in the map legend/key.  But take a quick glance at the screen capture below, noting that the cooler blue colours are where HE predict a decrease in traffic, and the warmer yellow, orange, red colours show a predicted increase in traffic. (click image to enlarge) 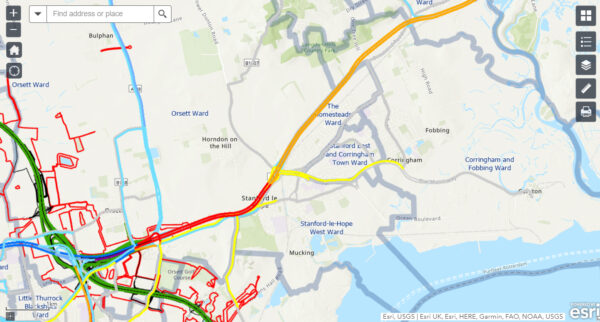 Of course when you get more traffic you are also going to see a worsening in air quality, as this screen capture of the interactive map with the Air Quality layer selected shows. (click image to enlarge) 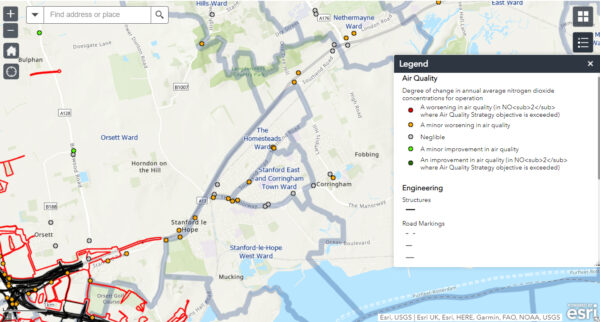 And also with more traffic comes more noise. However, it seems that HE can’t be bothered to provide the Stanford Corringham area with that info. As can be seen in the screen capture of the interactive map with the Noise and Vibration layer selected.  Please do be aware that with this particular layer you will need to click on the layer to expand the submenu to view and select the option to show ‘Operational in road traffic noise in the opening year’ to view the detail shown in the image below. (click image to enlarge) 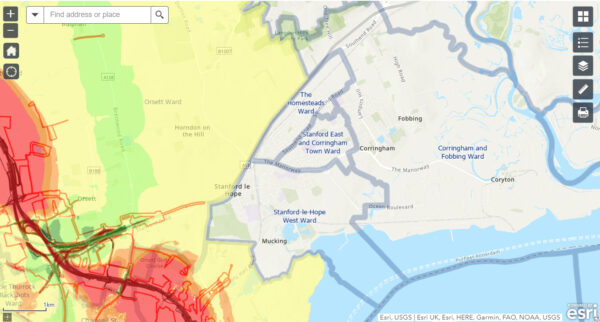 Not to worry if we take the info HE are sharing with us in the consultation materials as clear and informative(!!!!) maybe they would be instructing the noise to avoid impacting these areas where they couldn’t bothered to provide us info for.  Yeah right.

Whilst construction would not take place directly in the Stanford/Corringham area the impact to the local area throughout the region would be huge, take a look at our updates on construction to find out more.

With lots of development and expansion in the area from the likes of DP World and London Gateway there will be many impacts to the area, traffic, pollution etc.

It is also worth noting that discussions are taking place for Highways England to adopt the A13 from the A1089 right through to and down the Manorway as a trunk road, to make it part of the Strategic Road Network.  Currently HE only control and maintain the A13 down to the A1089 from the M25, as well as the actual A1089.  Just think about the state of the road and littering on the A1089 as to the level of management and maintenance HE seem to provide (or not provide more accurately).

Remember also that despite all we are going through now in regard to the A13 widening, to make it 3 lanes in both directions between the M25 and Stanford junction, if the LTC goes ahead there would be a section of the A13 in both directions that would be back down to 2 lanes, another bottleneck courtesy of HE and the LTC.

Plus at the end of the day the Dartford Crossing would still be over capacity, even if the LTC goes ahead, and all this is at a cost of £8.2bn to taxpayers.  So don’t forget to have your say!

We hope this update has helped highlight some of the impacts for the Stanford/Corringham area, and remember HE have now finally agreed to hold a consultation event on Aug 18th at Homesteads Hall so get down there if you can and want and ask more questions!

If you want to comment on any of the errors and inadequacies of the consultation then do so.

If you feel that the wards in the Stanford/Corringham area should have been provided Ward Impact Summaries then say so.

HE have an obligation to provide us with a clear and informative consultation, if you don’t feel they have done so then be sure to have your say in your response.