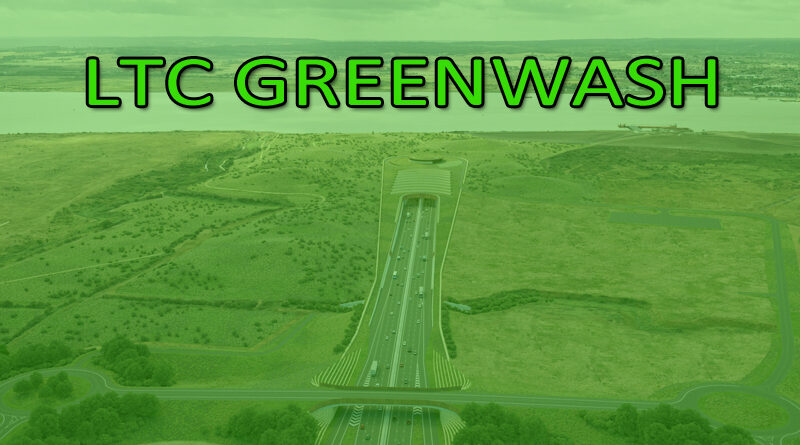 It’s hardly surprising that with such a hugely destructive and harmful project like the proposed Lower Thames Crossing that National Highways are attempting to greenwash the project.

On 18th July 2022 National Highways issued new claims about the carbon emissions of the proposed LTC being reduced by 80%.

Yet as we highlighted in our update, far from showing an 80% reduction their press release figures actually showed a whopping 67% increase in the estimated traffic carbon emissions.  The actual total estimated carbon emissions when you add in those from construction and maintenance etc now stands at over 7 million tonnes of carbon.

Yet another attempt by NH to try and put a spin on the realities of the proposed LTC with yet more greenwashing.

National Highways are today attempting to associate the proposed LTC, a project that is estimated to emit over 5 million tonnes of carbon emissions, to #NetZeroWeek.  Do they have no shame? 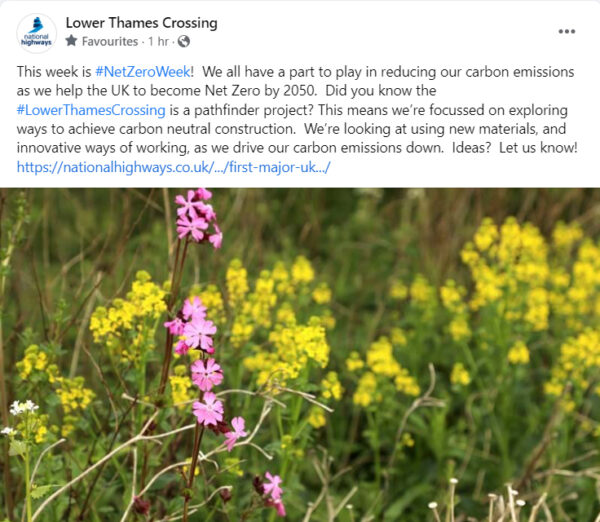 In the latest greenwash instalment they are attempting to greenwash with a 1 million trees target for the proposed LTC.

Their own headline on their media release update stating:
“A community woodland and two public parks among 400 hectares of ‘landscape scale’ woodland creation planned with Natural England”

Let’s just take a quick look at the latest artist impressions of the two public ‘parks‘ (also known as spoil dumping sites) and see how many trees we can spot.

Not a huge amount of trees.

And a community woodland? Well that would be their proposed Hole Farm Community Woodland, which they’ve attempted to use to greenwash the LTC with previously.

You may remember they originally bought Hole Farm as part of their plans to ‘improve’ biodiversity alongside their major routes, in this instance the M25.  They have said it will go ahead regardless of whether they are granted permission for the LTC or not. At the time of their first attempt of greenwashing with Hole Farm the site wasn’t even within the LTC development boundary.

However, it was added to the LTC development boundary as part of the Local Refinement Consultation as one of a number of nitrogen deposition compensation sites.

In this instance the harm comes from nasty nitrogen pollution as a direct result of the traffic associated with the proposed LTC.

Back on the topic of Hole Farm being used as a nitrogen deposition compensation site, and part of the tree planting target for LTC.  As has been stated on numerous occasions by NH, and something they still stand by as our questions to them on the topic during the recent consultation proves, their proposal for Hole Farm Community Woodland will be progressed, by means of a planning application to Brentwood Council later this year, regardless of whether the proposed LTC goes ahead or not.

In a recent email response NH/LTC told us:

“Hole Farm Community Woodland is progressing independently of the Lower Thames Crossing and the masterplan for the site is the subject of a separate planning application and we are hosting a period of community engagement on our plans. National Highways has committed to delivering the Hole Farm Community Woodland masterplan subject to the associated facilities receiving planning permission from Brentwood Council. We provide further details of our emerging proposals for the site on pages 133 and 157 of the Guide. The land at Hole Farm would perform three functions of providing a community woodland, improvements in biodiversity, and compensation for nitrogen that will be deposited on sensitive sites from the operation of LTC.”

With that in mind we deem it to be extremely creative accounting for them to be attempting to claim Hole Farm as part of the LTC project or part of the compensation and tree planting target claims.

As the name suggests Hole Farm was a working farm before NH got their hands on it.  The proposed LTC is also estimated to destroy and impact thousands of acres of agricultural land.

Not only that, the other additional nitrogen deposition land recently added to the development boundary is also largely agricultural land.

And this is at a time of serious food security concerns, so hardly a time to be considering destroying so much of our valuable agricultural land. Especially not for such a hugely destructive and harmful project that meets none of the project objectives, and is not fit for purpose.

In addition, within this latest greenwash NH are using comments from Natural England to try and add weight to their claims.  Yet it should be remembered in the Local Refinement Consultation it was stated that Natural England and others do not agree with NH’s assessment on nitrogen deposition impacts, particularly in regard to Epping Forest Special Area Conservation.

Greenest Road ever built in the UK

NH have also previously attempted to greenwash the LTC with claims it would be the greenest road every built in the UK.  Admittedly the bar on that is pretty low, but short of painting the whole thing green we can’t see it happening.

Who knows maybe next up will be the ‘LTC Greenest Road Consultation’ to ask us which shade of green they should paint it!  And based on the inadequacies of previous consultations we imagine the colour palette provided to pick our favourite shade of green would likely contain typical tarmac shades of blacks and greys!

The greenest road claims would of course also see an increase in the already extortionate £8.2bn and rising financial cost, not to mention the huge and unacceptable cost to the environment and our health and wellbeing.

“You cannot talk about caring for the natural environment whilst proposing such a hugely destructive and harmful road project.  Much of the land where they are proposing to plant these trees is agricultural land that they want to take for compensation for the harmful nitrogen pollution the project would cause.  This is not mitigation, when you minimise the impacts, this is compensation, when you acknowledge the damage that has been done, because they can’t find a way to minimise or stop the pollution.  It also increases the thousands of acres of farmland that would be lost if the LTC goes ahead, at a time of major food security concerns.

A huge chunk of this proposed compensation land is at Hole Farm, near Great Warley, which National Highways have already publicly stated is part of their national plans to ‘improve’ biodiversity along their major routes, in this instance the M25. Since they have stated these plans are going ahead regardless of whether the LTC gets permission, they should not be counted as part of the LTC project, It is creative accounting and yet more greenwash nonsense.”

Hole Farm nothing to do with LTC – click here