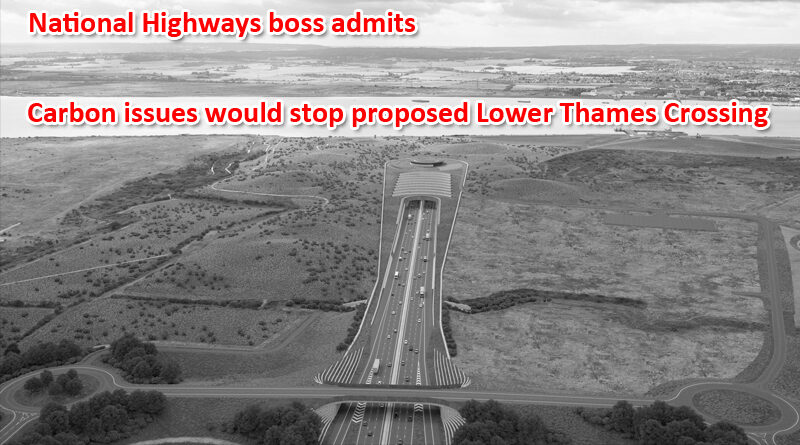 New Civil Engineer (NCE) have reported that a National Highways boss has said there won’t be a Lower Thames Crossing if they don’t resolve carbon issues.

The article published on the 9th December 2022 was reporting on the NCE Tunneling Festival where National Highways Lower Thames Crossing project director, tunnels, Sinisa Galac was quoted as saying:

“We have been rightfully challenged by environmental groups and by the government to be where we should be with the Paris Climate Agreement. And the Climate Change Act 2008 is a legally binding document – if we don’t end up on the path towards carbon net zero in 2050, we are going to be breaking the law,”

He also mentioned that the Government have declared LTC a Carbon Pathfinder Scheme, and clarified that they have a budget for innovation.

He is also quoted as saying:

“Alternative? There is none. If we don’t resolve it, there won’t be a project.”

Mr Galac is also reported as outlining some of the ways they are working to reduce and offset carbon emissions.  He mentioned the biodiversity net gain plans which includes planting a million trees, building seven green bridges and creating 60km of active travel pathways through new landscaping.

As we know all of these aspects are questionable.  The creative accounting on tree planting in regard to Hole Farm Community Woodland which NH are including as part of LTC mitigation and compensation, but previously stated would publicly go ahead regardless of whether the LTC is granted permission or not.  Green bridges are more an attempt to greenwash the project and not the likely to meet the expectations that many imagine when they think of wide green wildlife bridges.  As for the walking, cycling, horse riding routes, many of the ‘new’ routes are actually existing routes that National Highways would need to realign because of the LTC, if it goes ahead.

Anyway, back to Mr Galac, who said that the project has also already removed 30% of the carbon through redesign.  And that another 20-30% of the carbon will be reduced by the future replacement of fossil fuels with hydrogen and alternative fuels. He also claimed that another 10-20% will be slashed through carbon capture. (We emailed NH/TC about the claims of further slashing of carbon emissions – see their response below)

“If any of those fail, the project fails,”

Also at the industry event

Mott MacDonald tunnels project director Rosa Diez also stressed, earlier at the event, the need for major projects to lead the way in implementing low carbon construction, but showed scepticism that it was actually happening.

“I think major projects should have a budget for R&D and innovation, it should be part of what they request,” she said. “When you tender for a job, you usually have a part for innovation, but, for me, it’s a bit like the green washing currently going on in terms of the environment. Everybody says things are innovative when a lot of the time there’s not really any innovation, as such.”

“It should be part of major projects, but because of budget constraints it is not happening.”

NCE are not alone in reporting about LTC carbon emissions, another industry publication, Highways Magazine has also reported the fact that the estimated carbon emissions for the proposed LTC have risen by approx 25% since the first attempt to submit the LTC DCO planning application.

Of course National Highways attempted to give reasons for the increase in the figure, but in light of the NCE article and admission that there won’t be an LTC if NH don’t resolve the carbon issues, this hardly comes as a surprise.

The latest info available on the predicted carbon emissions of the LTC, if it goes ahead, details around 6.6 million tonnes of carbon.  This most definitely is not compliant with the legal commitment to Net Zero.

The Climate Change Commission have stated that “New roads should only be built if they can be shown not to increase emissions“.

Carbon emissions are of course just one of many issues and concerns we have with the proposed LTC, but it is a big one, and after reading the NCE article it is apparent that despite what they have been telling the public and including in their propaganda and greenwashing attempts National Highways are aware of the carbon issue.

It also shows that some in the industry acknowledge, what we have been saying for sometime, that whilst there is a lot of talk about innovation and reducing carbon, there isn’t really any innovation to back up the talk and solve the issue of carbon emissions.  Speculation and intentions are not enough.

It is quite clear that NH are simply attempting to push ahead with a hugely destructive and harmful project, that is not fit for purpose, knowing that really it should be scrapped because it will not be compliant with legislation on carbon emissions.

We also know from attending the LTC Road to Net Zero industry summit in Feb 2022 that industry have commented on the cost of greener cleaner construction vehicles/machinery as being around three times as expensive as more traditional fossil fuel vehicles/machinery.

So the question also needs to be asked how much more the financial cost could rise to reduce carbon emissions, especially when the National Audit Office has reported on value for money issues with LTC too.

What NH/LTC said when we emailed them

Following Mr Galac’s comment about, “another 20-30% of the carbon will be reduced by the future replacement of fossil fuels with hydrogen and alternative fuels. Another 10-20% will be slashed through carbon capture” we emailed NH/LTC to ask for more info on the mentioned carbon capture.

The NCE article referenced a talk that Sinisa Galac, Tunnels Director for the Lower Thames Crossing, gave at a tunnelling industry conference. The audience at the conference included representatives from organisations that are involved in researching replacement of fossil fuels and carbon capture and utilisation and storage (CCUS) or are likely to seek to work on the scheme and Sinisa took the opportunity to impress on them the extent of our low carbon ambition.

As a pathfinder for carbon neutral construction, we will seek to adopt low and zero carbon technologies as they become viable. While carbon capture, utilisation and storage (CCUS) is not yet available, there are a number of industrial clusters in the UK where the technology is being developed. The projected readiness dates overlap with the construction period of the Lower Thames Crossing and there is potential that we could start using cement manufactured with CCUS towards the end of the construction period.

Seems to us that this just backs up what we have been saying all along, NH/LTC do not have the technology to back up their claims, and even if it were to become available it is likely it wouldn’t be until towards the end of construction (if the LTC goes ahead).  All talk and too little too late at best, this is not acceptable and can’t be compliant with Net Zero.

Highways Magazine have published an article reporting on how when TCAG and they (Highways Magazine) requested further info on both National Highways/LTC and Balfour Beatty claims of carbon reduction the claims faded.  This follows National Highways announcing that Balfour Beatty had been awarded the LTC North of the River contract, subject to permission being granted.  As part of the announcement Balfour Beatty claimed they would significantly reduce carbon emissions.  Seems neither have any evidence to back up their claims, and as we’ve been saying for a while it’s more propaganda and greenwash.