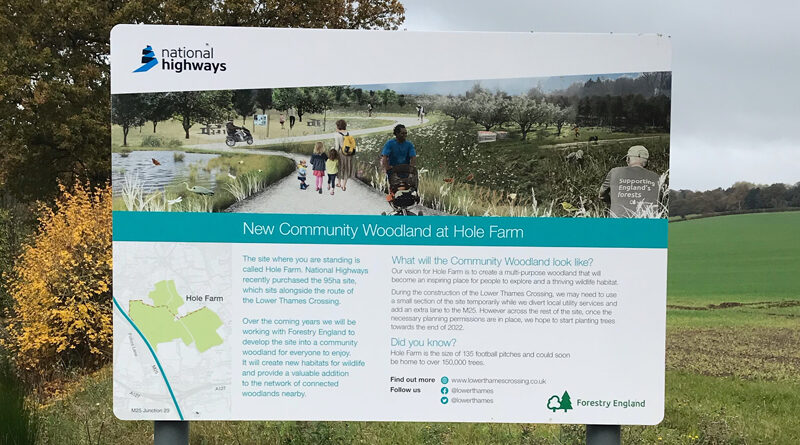 They are now promoting the proposed community woodland, which would be managed by Forestry England on the LTC project website, along with details of a survey and webinars relating to the woodland.

We also note that both the proposed LTC and Hole Farm Community Woodland projects result in a loss of agricultural land, which also brings questions about food security and associated carbon footprints of our food due to the loss of so much agricultural land.

If National Highways truly cared about the environment and biodiversity then they would not be pushing ahead with such a hugely destructive and harmful project as the proposed LTC.

At the workshop webinars it was stated that the Hole Farm site had poor biodiversity.  We were keen to know when the environmental surveys took place. The website states they were completed in Summer/Autumn 2021.

The initial response we got in Feb 2022 when we asked stated “Environmental surveys are being conducted over a two year period (they began in 2020) and haven’t been restricted to Autumn and Spring; they have also included wintering bird surveys and a great crested newt survey will be conducted this summer“.

We questioned this since NH/LTC only bought the Hole Farm site in June 2021!  The next response we received in April 2022 stated “There was an error in our previous response to you; it should have stated that the surveys began in 2021 when the purchase of the full site was completed. We apologise for any inconvenience caused.”

We have to question further how these surveys can be considered complete or adequate.  You need to survey at different times of the year and over time, so you can get a true representation of biodiversity levels.  Clearly this cannot be the case if they started in June 2021 and we are only at the beginning of May 2022.  Yet they are publicly stating they have completed the surveys and that biodiversity levels are poor at the site.

He also stated that their plans are to plant trees at Hole Farm as soon as later this year, and use it as a nursery to grow trees to be transferred along the LTC route, if it goes ahead.  This is to save them money, and for them to be able plant larger trees rather than whips along the route.  Hardly seems in keeping with their promises of a community woodland to be using it to plant trees and then dig them up to take elsewhere!

Forestry England, in partnership with National Highways have announced a community tree planting event at Hole Farm on 4th Dec 2022.

Since no planning applications have apparently been submitted to Brentwood Borough Council, and the council are stating that the Hole Farm TCPA submission date in the programme is Monday 23rd January 2023, we have emailed Forestry England and National Highways/LTC to ask what is going on.  After all, surely if you need to seek planning permission for change of land use, to change Hole Farm to a Community Woodland, you should get permission before you start planting the woodland?!

Forestry England and National Highways hosted two final consultation drop-in days in the Great Warley Rectory Hall on Friday 2 September, 12.00 – 5.00pm and Saturday 3 September, 10.00am – 2.00pm.  There was also information on display at the Thames Chase Visitor Centre throughout September.  More details and info on responding to the consultation – click here

They also hosted public drop-in days at Hole Farm (Warley, Essex), offering tours of the site with opportunities for you to share your thoughts and ideas about the designs for the proposed new community woodland on Tuesday 10 May and Wednesday 11 May 2022 at 12pm, 3pm, 5:30pm

National Highways have provided a timeline for the proposed community woodland

** Please note this will be a local planning application submission to the Local Authority, Brentwood Council, and is not part of the proposed LTC Development Consent Order (DCO) 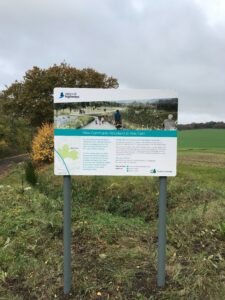 Those in the Hole Farm area may also have seen National Highways signage about the proposed community woodland such as the one pictured.  Click image to open in a new tab and then click again to enlarge.

We have had an initial response to some of our questions, but unsurprisingly many of the questions we raised were avoided, so we have emailed again to ask for responses to the unanswered questions!

We have since been advised that, “Whilst the wording is not used on this particular sign, we are open and transparent that we do not yet have planning permission to build the Lower Thames Crossing.” and “As the Hole Farm community woodland initiative is being delivered by the Lower Thames Crossing team within National Highways, this is why its progress is being shared on the LTC channels.”