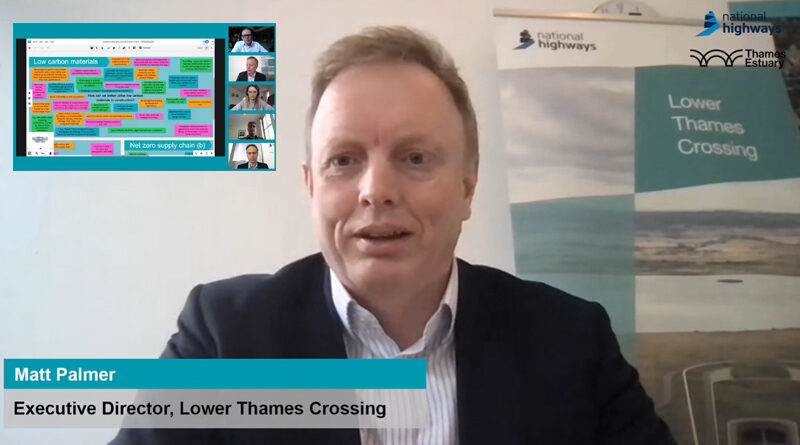 On Fri 25th Feb 2022 TCAG Chair, Laura attended National Highways’ LTC Road to Net Zero summit.  This was an industry summit in conjunction with the Thames Estuary Growth Board.  According to NH at some points in the online summit which ran from 9.30-12.30 there were as many as 150 people, this would of course include all the LTC team as well as speakers and other attendees.

The event started with an introduction by LTC Exec Director Matt Palmer, followed by Kate Willard OBE, Chair of Thames Estuary Growth Board and the Thames Estuary Envoy, and Charles Stevenson, General Manager of JCB.

Ludicrous to be talking about Net Zero when the proposed LTC is currently estimated to emit over 5 million tonnes of carbon emissions if it goes ahead.

What did we think of the LTC Road to Net Zero summit?

It seems to us that there was an awful lot of talk at this summit but very little if any evidence that there is anything truly in place and ready to go to ensure that these aims would be able to be met if the proposed LTC does go ahead.

We heard how electric vehicles might be ok in smaller construction machinery, but not the larger ones that would be needed for projects like LTC.  We heard about hydrogen, although it wasn’t really made clear which type of hydrogen might be used, and we know that not all hydrogen is green!  Also that hydrogen construction vehicles/machinery is in development but is not here yet.  We heard how hydrogen machinery doesn’t like vibrations, and has issues coping with the erratic power usage needed for things like diggers which surge in the power needed as they fill and lift full buckets of materials.  How the hydrogen would need to be very pure for these kind of vehicles/machinery.  And we heard how hydrogen machinery/vehicles would be over 3 times more expensive than current machinery and vehicles.

We heard many different people talking about the issues and challenges of working towards lower Carbon emissions, and moving towards Net Zero.  How it will be important that all the different aspects of the industry try to work together, and how they are all looking for companies and people to come forward with solutions.

What we didn’t hear was any evidence that there were any ready to go solutions to reach the targets they were talking about.

When they speak about wanting to lower carbon emissions and get to net zero, my reaction was yeah and we’d all like to win the lottery, doesn’t mean it is going to happen!

There was also a few virtual polls held through the morning.  The last one was to give up to 3 words that described what your one take away of the event which would end up on a word cloud.  For this Laura’s response to the poll was “Stop LTC greenwash“.  Here’s LTC Exec Director, Matt Palmer presenting the word cloud.  Notice how Laura’s response was not included in the word clouds!  And how it’s always sensible to identify words correctly before reading them out, otherwise you may sound a bit “useless”!!  Take a look and see what we mean!

And you know what makes it even funnier is that we only picked up on the “Useless Use Less” comment when we went to grab a screen shot of the word clouds to show that Laura’s comment hadn’t been included.  Had NH/LTC have just left “Stop LTC greenwash” in the word cloud results we probably wouldn’t have even noticed the “Useless” comment!

I would also just finish by saying that Matt Palmer actually asked everyone that attended to promote and talk about the event, and we’re happy to oblige!

We were asked by local press to comment on the press release about LTC being designated a ‘pathfinder project’, this is what we had to say:

“What exactly does ‘pathfinder’ mean?  Seems like an attempt of using terminology that nobody really knows or understands to try and give the impression they have a plan.  From what we can see in the info provided there is a lot of talk, but not much actual evidence to back up the talk. Identifying, testing and considering ideas doesn’t give us much confidence that if the proposed Lower Thames Crossing did go ahead it would solve the  problem of over 5 million tonnes of carbon emission.

It seems to us that unless National Highways are proposing painting the LTC green with paint, if it goes ahead, such a hugely destructive and harmful road project will never be able to be considered green.  That said in light of the serious safety concerns about the orange paint on the Smart Motorway emergency refuge areas, we wouldn’t trust them with that either.  There is simply no evidence to back up talk of LTC being the greenest road in the UK.

As for comments suggesting that the proposed LTC could help improve the lives of millions of people, by creating jobs, protecting wildlife and opening up areas of landscape, what nonsense.  The proposed LTC, if it goes ahead, would negatively impact the lives, homes, businesses, health and wellbeing of people, destroying communities, greenbelt, woodland including irreplaceable ancient woodland, agricultural land including valuable grade 1 listed land, solar farms, wildlife and habitat, the environment and so much more.

There is no evidence in the info shared by National Highways that changes our mind, we are and remain strongly opposed to the proposed Lower Thames Crossing.”