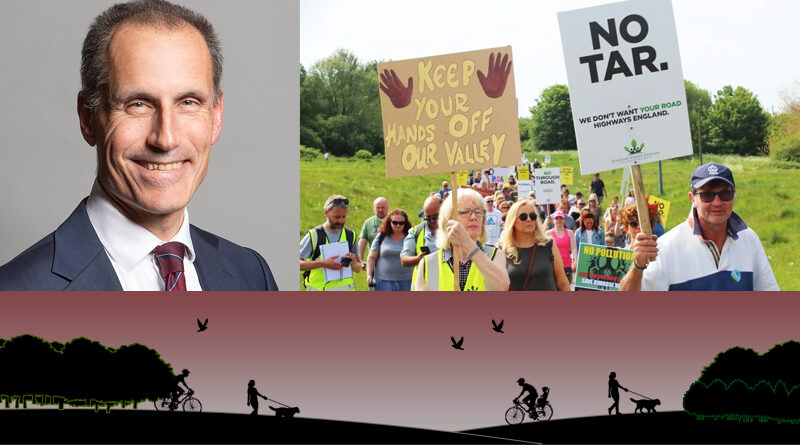 There are calls for an investigation after more evidence of Highways England’s cover up culture is being exposed.

It’s no secret that we’ve suffered our own issues with Highways England, poor communication and general inadequacies over the years, but now even more evidence is being exposed about the cover up culture from Highways England.

Save Rimrose Valley a group fighting Highways England’s A5036 Port of Liverpool Access Scheme which would destroy the beautiful Rimrose Valley country park in Merseyside have been struggling to get info from HE, in a similar way that we have on various things.

Their local MPs, Bill Esterson and Peter Dowd, stepped in to try and offer help in getting the info by way of a Freedom of Information request. but they too were intially refused.  However, emails that have since been obtained show that HE had been attempting to bypass requests from campaigners, and referring to campaigners as “cheeky little monkeys“.

We at TCAG have since viewed the emails mentioned in this news story, because we became even more interested after discovering that there was reference to us, and the article that New Civil Engineer ran about our “damning evidence” in relation to our Inadequacies of LTC Consultations report that we submitted to the Planning Inspectorate late last year, in the emails.

In the chain of emails, Highways England assistant project manager for regional investment programme North West Paul Burroughs suggests that refusing the FOI in relation to Rimrose Valley could “go a long way to closing down the FOI/EIR route for RVF in future.”

In the emails he states, “I suggested we hold our nerve on this […] if we accede, it will not be the end of the matter”

“There is of course no guarantee that, if we call their bluff and force RVF and/or the MPs to appeal to the IC, the Commissioner will rule in our favour – but we wouldn’t be much worse off than if we give way now.”

“On the other hand, if she did rule in our favour, it could go a long way to closing down the FOI/EIR route for RVF in future.”

“I’m not saying that refusal is an easy option – far from it. But for myself, I’d quite like to give it a go. And who knows? Maybe the uncharacteristically spirited rebuttal published in the New Civil Engineer recently suggests more of an appetite for defending ourselves robustly!”

The later part of that comment referring to the article in NCE about our Inadequacies of LTC Consultation report.

The email also described how colleagues at Highways England deployed the same tactics in Chichester – referring to the controversial A27 Chichester Bypass scheme.

Quotes from other campaigners

In articles about this latest news other campaigners have been quoted:

Vic Kent on behalf of the A27 campaign group – “It’s sad to hear that Highways England has yet again been doing its utmost to systematically deny citizens their legal rights to public sector transparency.  This is another example of Highways England pushing forward its irresponsible and environmentally damaging programme of road building with no regard for local communities or the global environment.”

Rebecca Lush of the Transport Action Network – “Highways England’s responses expose their disrespect for local communities, the environment and even parliamentarians.  Highways England must act with transparency and accountability, and not show contempt towards local people and elected MPs.”

Claire Mercer, founder of the Smart Motorways Kill campaign – “Highways England is a government agency, which means it has a responsibility to work for the public good – in reality they treat the public like competition.  The campaign I set up after the death of my husband had also been unfortunate enough to experience the games and tactics Highways England play to avoid publishing data that doesn’t fit their narrative.  Whether it’s smart motorways or the environment, Highways England refuse to publish anything that shows the true impact on people and communities.”

We at TCAG have to agree, this is yet more despicable and arrogant behaviour from HE.  They seem to think they are a law unto themselves,  and they and their despicable coverup culture need to be investigated as a matter of urgency.

We thank Save Rimrose Valley and other campaigners, along with the MPs who have been involved in this for their recent communications with us, and for sharing the relevant details and copies of emails.  Together we are stronger!

Not the first time

This is not the first time Highways England has been criticised for its handling of FOI requests.  We’ve had our own issues with them in relation to FOIs we’ve put in, which you can read about here.

However, in December 2020 HE were also forced to reveal information on the repair status of bridges on motorways and A-roads after an 18-month-long FOI battle.

They had initially declined to reveal the information to The Times on the grounds terrorists could use it to plan an attack on vulnerable bridges.

The Information Commissioner ended up ruling that HE’s arguments were baseless, but there was a further two month delay in releasing the information due to HE trying to get a judge to overrule the commissioner, before finally withdrawing its case and releasing the data.  You can read more here.

Just some of the national coverage on this news: