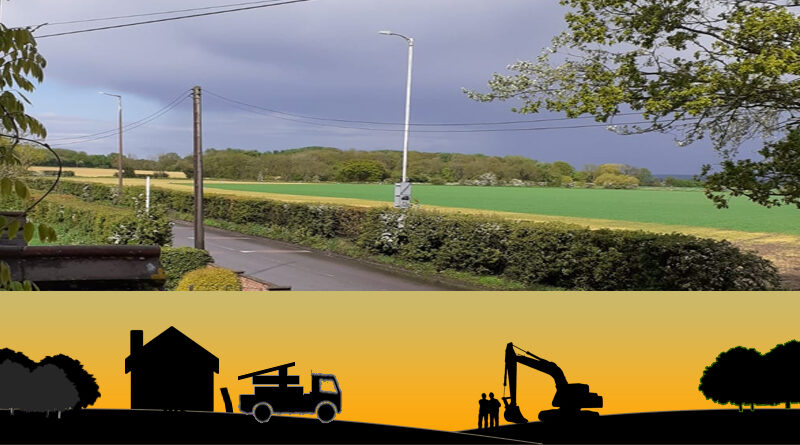 With the weather turning nicer again now, it seems Highways England and their contractors are now back out on sites carrying out investigative works.  However, as we’ve experienced on numerous occasions before, people are reporting yet more LTC investigative works issues and concerns.

Residents in the Baker Street area of Orsett have voiced concerns about the number of HGVs waiting to be escorted by HE to the investigative site down Fen Lane.

HE are using a one way system for their contractors that means that any of their vehicles exiting Green Lane onto Fen Lane are NOT permitted to turn right onto Fen Lane, but instead must travel straight ahead/ left onto Fen Lane, following the “horseshoe” one-way system round until the junction with the B188.  They have also stated that all Highways England vehicle movements are restricted to a 30mph speed limit.

However, residents have been dealing with HGVs blocking driveways, and there has also been damage to someone’s fence post.

The HGV in question to the damage to the fence post was branded with Andrews Excavations Limited. We have since learnt that this company is registered to the same address and directors as the VIP Investments Ltd which is the company behind the retrospective planning applications for the LTC works compound in Pilgrims Lane near Sainsburys in Chafford Hundred.  A concern that there is this connection between these issues now and damage to residents property and the company behind this compound application.

After initial enquiries about these incidents HE sent an interim response saying they were related to LTC works and further investigation was being done.

Since then they have confirmed that after further investigation a resident’s fence post was damaged by one of the material suppliers for Balfour Beatty. They say HE/Balfour Beatty have visited and are in discussions with the resident and are rectifying this asap. The incident occurred as the driver did not adhere to the agreed access route procedures in place and as a result the works have been temporarily halted and the driver has been removed from the works as well as any further deliveries from this supplier.

Highways England went on to say:

We are taking this issue very seriously and are implementing the actions below as of immediate effect:

Why are HE’s procedures never good enough to stop all these issues happening in the first place?  How can we trust or believe them or their contractors when we keep experiencing all these issues, especially when this contractor, who has caused the damage, is also the same people behind the planning application for the compound in Pilgrims Lane.

Residents in North and South Ockendon have been in touch with us to voice concerns over food crops in the fields near them being destroyed because of the return of LTC investigative works in the area.  Signs of yellow killed off crops in what was all lush green crops prior to HE and their contractors arrival. First photo taken on 9th May, second one taken 30th May 2021.

This seems to be another case of bad planning and communications from Highways England.  Residents had been given the impression after discussions with HE/LTC last year, when they were previously in the same area carrying out investigative works, that HE and their contractors would not be returning for further investigative works.

However, HE now seem to be stating that it was only a temporary halt due to weather, and investigative works continue.

This also highlights the negative impacts to agricultural land if the LTC goes ahead.  You can read more about that in our other update here.

This isn’t the first time residents have brought destruction and waste of farm crops to our attention either. In October 2020 residents were voicing concerns and questioning the amount of potatoes and corn that had been left dug up and left to go to waste in the fields in the Linford area where LTC investigative works were being carried out.  Also more recently by residents in Orsett too where fields with wheat were being driven through and damaged due to LTC investigative works.

This at a time when we, as a country, really need to be looking to be as self sufficient as possible especially when it comes to food.  Plus of course the factor of food poverty, and food miles travelled and the associated environmental impacts.

How to report issues and concerns relating to LTC investigative works

How many times will we have to deal with these issues from HE and their contractors in connection to LTC?  Remember what we are experiencing now is nothing compared to the scale of works and no doubt issues that we would suffer with if the proposed LTC does go ahead.  Please be sure to have your say in the consultation that is due to commence in July, and keep following us for other ways to get involved and keep having your say.  Together we are stronger!

If you experience or witness any issues or concerns relating to LTC investigative works please call 0300 123 5000 or email info@lowerthamescrossing.co.uk 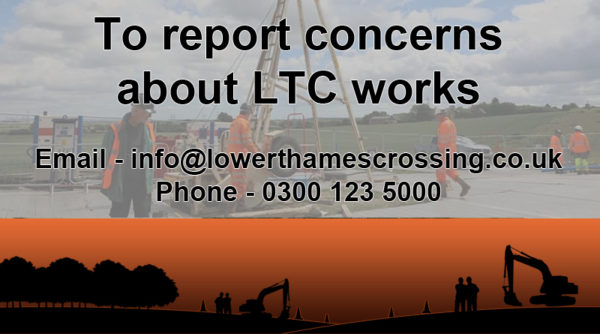