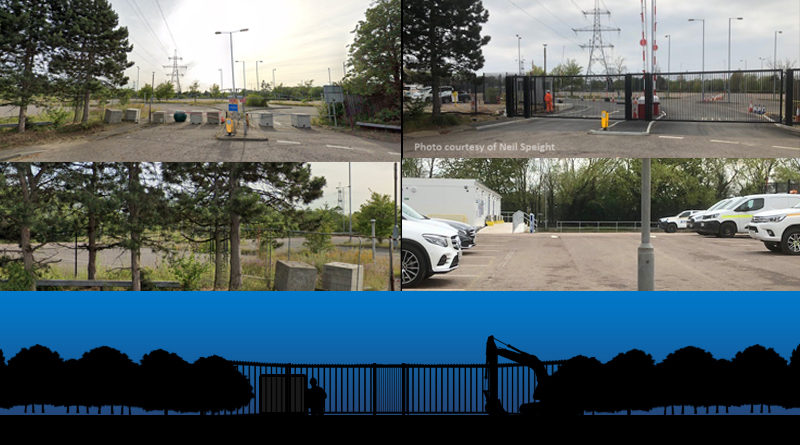 The first for the installation of security gates, and the second for the change of use of the site to a compound.  TCAG submitted responses/comments.

The hearing for the retrospective planning application for the LTC compound in Pilgrims Lane was held last night (Thurs 9th June 2022).  It was the last item on a busy agenda, and the meeting lasted around 4 hours!

Laura read the TCAG statement to the planning committee


You can zoom in and out using the + and – icons and scroll through the document pages using the arrows.

If you are having any issues with viewing the document above it can also be download as a pdf file here.

Members of the planning committee acknowledged that they could only refuse the application if there were legal grounds to do so, and opinions of the proposed LTC could not sway their decision making.

Some commented that they completely agreed with every word of TCAG’s Statement, and there were comments of concerns about the proposed LTC as a project.

However, when it came to the vote the outcome was 4-3 in favour of granting the planning permission.  It is not 100% clear what happens in regard to the still outstanding previous planning applications, we shall ask the council.

Whilst frustrating, we can understand the position the planning committee found themselves in.  As much as there may have been a desire to refuse it as a statement against concerns about the LTC, they simply cannot make the decision based on such reasons.  Had the planning been refused it is highly likely that the applicant (NH) would have appealed it, which would have very likely resulted in the decision being overturned.

We would just add in here for clarity that this application is of course just for the investigative works and temporary office space compound in Pilgrims Lane.  Our fight against the proposed LTC continues, and the process by which the LTC Development Consent Order is examined and judged is very different to local planning applications.

In our Statement we obviously spoke in opposition, but we closed by saying that if permission was granted we draw attention to the importance to ensure adequate conditions are placed within the permission.  Extra conditions have indeed been added. In light of the arrogant and disrespectful behaviour of the applicant (NH) we asked the council to closely monitor the site and to take any necessary action moving forward.

NH likely originally thought that it would be a straight forward case of getting permission for this compound, and whilst they may now have permission, we have made sure that full and adequate consideration has been given to what they are doing at this site, which has involved a lot of extra time and work for them.  We hope this will draw their attention to the fact that our community deserves more respect and that they need to do things properly, and that if they don’t we will always do our best to hold them accountable.

We have been notified by Thurrock Council that the planning hearing for this application will be heard in a meeting starting at 6pm on Thurs 9th June 2022.  We have been invited to submit a statement to speak on behalf of those opposing the LTC compound.  We have accepted the invite and submitted a statement.

We have been advised this meeting will be live streamed and recorded with the video recording being published via the Council’s website.

At the end of March, we became aware that investigative works were being carried out near the compound site, and NH/LTC confirmed it was Balfour Beatty carrying out utility survey works for the retrospective planning application.

Then in April NH/LTC announced another 4 nights of utility survey works near the compound, from 10pm-5am between April 19th to 22nd and then again between April 25th-28th.

These latest works will be carried out by Balfour Beatty again, we have asked NH/LTC for comment as we consider this to be a conflict of interest for them to be carrying out such works when they share the compound site with LTC?!

“Balfour Beatty use part of the site as an operational base to carry out survey works for LTC, but are also carrying out remediation and maintenance works on the buildings and site itself.

We do not consider that this is a conflict of interest; the survey works are purely investigative in nature and will factually report the location and condition of underground utilities. In addition, Balfour Beatty are an approved National Highways contractor and are technically competent with significant experience of carrying out works of this nature. As such, they are well placed to carry out these works.”

In late December 2021 we became aware of the third and latest planning application 21/01883/FUL for the site. Comments in relation to this application had to be submitted by Weds 5th January 2022.

You can read our comments in response to the 3rd retrospective LTC compound planning application here.

We submitted further additional comments in response to this planning application, since a number of the application documents were not in an accessible format when we made our original response.  You can read our response here.  This second response is in addition to the original.

On the 5th of June 2021 we received notification from Thurrock Council that the retrospective planning applications for the LTC compound in Pilgrims Lane, North Stifford (near Chafford Hundred Sainsburys) would be heard by the Planning Committee on 10 June 2021, meeting starting at 6pm.  We were again invited to present our statement at the meeting.

At the meeting on the 10th the decision of this planning application was deferred by the planning committee, until an adequate traffic plan has been produced and shared so that the application can be considered further and a decision made.

On Tues 20th April 2021 we (TCAG) received an email from Thurrock Council advising us that planning application 20/00430/FUL will be will be considered by the Planning Committee on 22nd April 2021 at 6.00pm.  Written statements had to be submitted to the council by 12 noon 2 working days before the meeting.

Since the email was only sent at 9am on the 20th, this means we had under 3 hours to prepare and submit our written statement.  Hardly seems like adequate notice or enough time properly be able to prepare and submit such a statement, some may not have even had a chance to check their emails before the extremely short deadline had passed.

However, we just about managed to submit our written statement in with literally less than a minute to spare. Click here to view.

Says a lot doesn’t it?! Firstly they didn’t have the decency to submit it before starting on the site. They then submitted retrospective planning applications. They have since issued follow up info that varies from the original application. And now they say the application requires further work on it. Reminds us of the DCO application that had to be withdrawn!

The 3 Retrospective Planning Applications for the LTC Compound

The original TCAG update on this planning application – click here