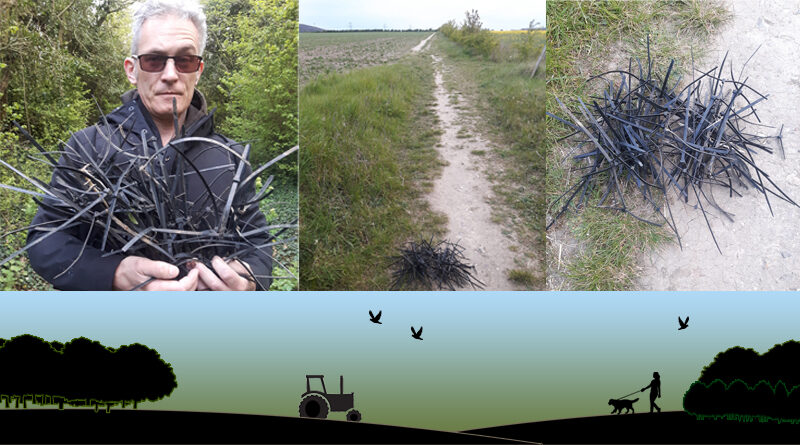 A local Chalk resident, Russell Palmer (in photo above), took to Facebook to post about LTC staff littering in fields in Kent.  He highlighted the fact that he has been litter picking discarded plastic cable ties left in Kent fields by LTC staff.  The location was one of the many investigative works sites that Highways England have had staff working in as they prepare their application for the LTC.  Workers had used barricades, connected together with plastic cable ties, around the work site. However, when they demobilised the site workers left large amounts of cable ties scattered in the fields, as could be seen in just one of the Russell’s hauls of cable ties that he has litter picked.

We questioned Highways England/Lower Thames Crossing about this and have received the following response.

“Regarding the cable ties, during the process of demobilising from site the pedestrian barriers that segregated the footpath from the works area had to be removed. Unfortunately this resulted in a few cable ties being left on site. We apologise for any inconvenience this has caused. We can assure you that this is a rare occurrence as post demobilisation as part of the contractors due diligence, a walkover is conducted with the landowner to ensure that the area has been left in a suitable condition. The site has since been revisited to further inspect the area for any other cable ties. In efforts to ensure this does not happen again the site team have been briefed on a different method of removing the cable ties and are also looking into using different colour cable ties to make them more visible if they come astray when removing.“

As a group, we at Thames Crossing Action Group are disgusted by this irresponsible behaviour by Lower Thames Crossing workers that has resulted in so much littering.  It is harmful to wildlife and the environment, not to mention the fact they have been left in the farmers fields where crops are now growing.  It also shows a complete lack of respect not only to the wildlife and environment, but also to local farmers, residents and communities.  How are we supposed to believe and trust Highways England/Lower Thames Crossing claims about them caring for the environment, wildlife, our communities etc with things like this happening?

We are of course grateful that there are residents like Russell in our communities that care and are taking the time to try and clean up things like this, but the point is they shouldn’t have to.  The proposed LTC is not fit for purpose and neither it seems are some of the procedures for staff working on the project, who appear to deem it acceptable to leave so many cable ties littering the local area

Should anyone have any issues or concerns regarding the investigative works being carried out for the proposed LTC then please contact Highways England on 0300 123 5000 or email info@lowerthamescrossing.co.uk and feel free to copy TCAG in if you wish (admin@thamescrossingactiongroup.com).  Together we are stronger!