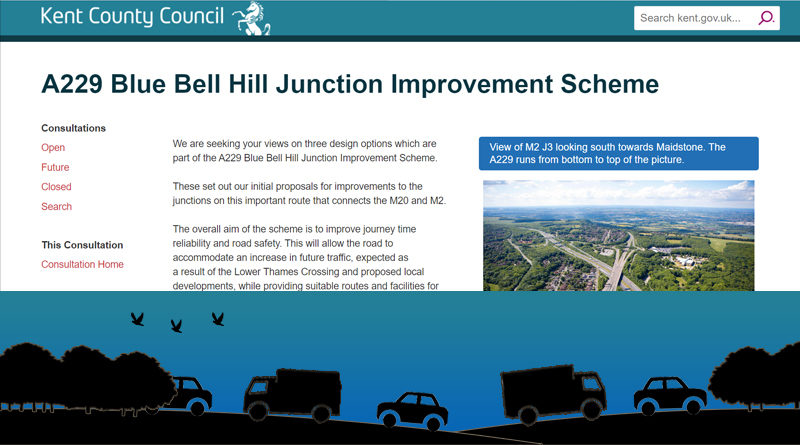 As so many of us are aware the proposed Lower Thames Crossing doesn’t have adequate connections to the existing road network. One such issue that has been raised and commented on so many times is Blue Bell Hill in Kent (the A229).

Kent County Council are running a consultation on proposed improvements for Blue Bell Hill, with 3 design options that they currently want people’s comments on.

This is important because if LTC goes ahead, traffic needs adequate connections otherwise it will seek other routes.  Whilst we obviously remain strongly opposed to the proposed LTC, if it does go ahead we need to try and do all we can to ensure that the negative impacts are reduced as much as possible.  A best worse case scenario, for want of better words!

Please be aware this is being proposed as a stand alone project, not part of the LTC project, and it is Kent County Council, not Highways England who are holding this consultation.

It amazes us that Kent County Council can support LTC for so many different reasons, but especially knowing that it inflicts the need for changes like this, which they acknowledge in their consultation materials as one of the main reasons for needing these improvements.

Here is the official TCAG response to the Blue Bell Hill improvements consultation.

Have a look through the Blue Bell Hill improvement consultation materials here .  This consultation ended on Mon 19th Oct 2020.