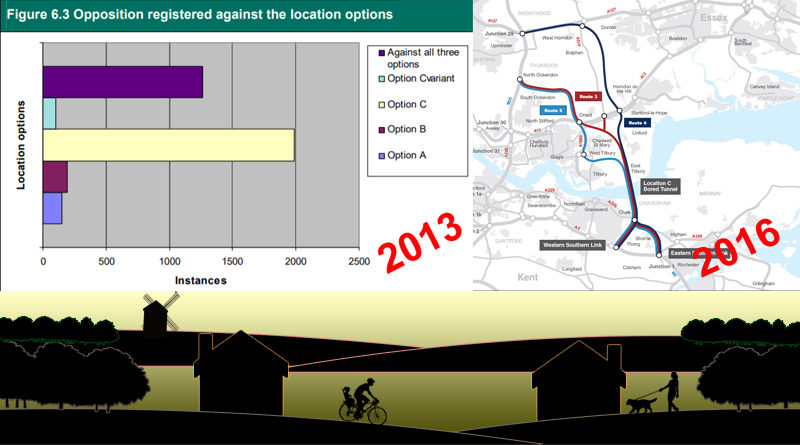 None of us are fans of the proposed Lower Thames Crossing, many of us realise it is the wrong crossing in the wrong location, and that it is not fit for purpose.  How did we end up with Option C3 as the preferred route?  Let’s go back, back to the 2013 LTC consultation

In December 2013 an LTC Consultation Response Summary was released.  In that Summary there are some very interesting points to bear in mind.

Most interesting to us is the fact that on Page 31 it clearly states in point 9.3

“Again, we received a mixed reaction regarding the location options, with 20% of all respondents expressing a preference for a new crossing at location Option A, 5% preferring Option B, 17% preferring either Option C or C variant, and 26% expressing a preference for another location. Option A was preferred by most individual respondents and Options C and Cvariant were most popular with those responding on behalf of organisations.”

Remember location Option A covered many variants around a similar location to the current Dartford Crossing, location Option C had many variants all in a similar location to where they have now chosen the preferred route Option C3.  They clearly state that “Option A was preferred by most individual respondents and Options C and C variant were most popular with those responding on behalf of organisations“(most likely businesses). 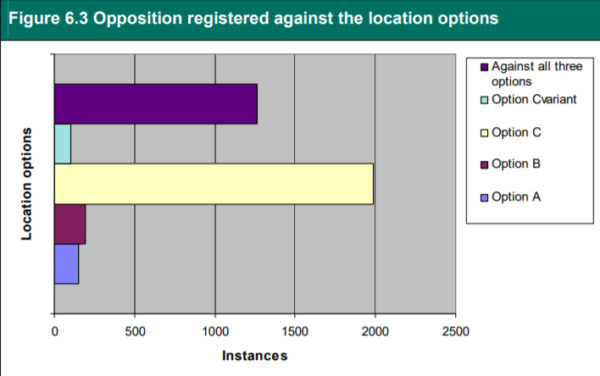 Fast forward to the consultation in 2016

Remember the results of the 2013 clearly show that the most preferred location was Option A, and one of the least favoured was location Option C.

What did Highways England ask us next?  Would we prefer route option C2, C3, or C4!  You really couldn’t make it up.

We always say it’s like someone telling you that they don’t like cheese, and then you asking them if they would like a Cheese & Tomato, Cheese & Onion, or Cheese & Pickle sandwich.  They don’t want Cheese!

Not only that, they presented this consultation in a completely biased way in favour of these route C options and hid away info and options to truly be able to respond on anything other than one of the Option C routes, unless you dug deep enough and did enough of your own research to be able to comment on a different route option.

This is very apparent on the 2016 consultation website –  https://highwaysengland.citizenspace.com/ltc/lower-thames-crossing-consultation/.  They state:

“Following a series of studies and a public consultation in 2013, the Government commissioned Highways England, the operator of the country’s motorways and major roads, to consider options at two locations. These are shown on the map overleaf, at the site of the current crossing, known as Location A, or a new crossing location further east, known as Location C.

At both locations we have developed engineering solutions and assessed them in terms of their economic, traffic, environmental and community impacts. The assessment has also taken into account the significant growth and development plans for the region. At Location C, three potential route options have been identified north of the river in Essex and two south of the river in Kent.”

Does anyone else see any options at Location A shown on the map?  No, we don’t either, just HE pushing Location C options onto people.  Is this not considered misleading?  Is this clear and informative material?

The Secretary of State for Transport of the time, Chris Grayling, announces the preferred route, a tunnel under the River Thames east of Garvesend and Tilbury (location C, route three with the Western Southern Link).

After the preferred route being announced we have of course been through further rounds of consultation, and ours and many others responses continually include the fact that we are opposed to the proposed LTC route for so many reasons, many of which are detailed on the many updates on this site.