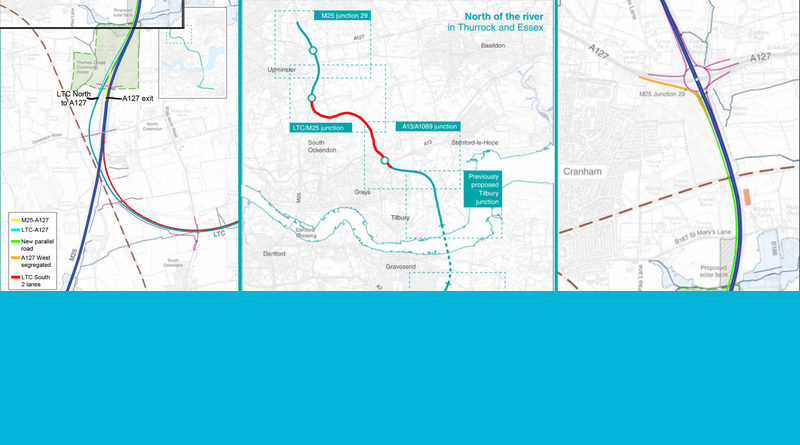 For those that may not be familiar, let’s take a look at LTC/M25/A127 (J29) junction, as it’s not a straight forward junction.

Let’s start by pointing out that in the Supplementary Consultation Guide HE consider this as two different junctions.  The LTC/M25 junction and the M25 Junction 29.  The maps and info are spread into two different sections.

However, when you start looking at the bigger picture (click on the map to the left if you wish to enlarge it!) it soon becomes clear that this is all one big rather complex junction.

We’ve put both the maps together to the left to show how they connect.

The M25 is shown in dark blue.

The first thing to realise is that the Junction 29 sliproad heading northbound on the M25 as we know it now will no longer exist.

Instead as you come up the M25 northbound if you wish to exit onto the A127 then you will need to take the new exit which is marked in yellow on the map. It would be just after you come under the Ockendon Rd bridge, about 1.7 miles earlier than the current J29/A127 sliproad off the M25.  Click on the image to enlarge if needed, it is also labelled A127 exit!

If you miss this new exit off of the M25 northbound and wish to access the A127 you would need to go all the way up to J28 to turn around and come back down to the A127, it cannot be accessed once past this point on the M25.

You will notice that the yellow route joins a bright green route. That is a new two lane road that runs parallel to the M25 all the way up to the A127 roundabout.

At the top of it you will notice an orange coloured route, that is a segregated lane onto the A127 westbound (heading towards London).  You can also stick to the bright green route right up to the A127 roundabout if you wish to go anywhere other than westbound on the A127!

When you come northbound on the LTC you will also have the chance to stay in the left lane to access the A127 shown in a bright blue on the image to the left, which again then goes onto the bright green parallel route up to the A127.

You will notice that the two right hand lanes of the LTC shown in the teal colour go around and under the yellow route (traffic coming off the M25 for the A127) to join the dark blue M25 heading northbound.

We have also highlighted the LTC southbound from the M25  down towards the A13 in red. This is to bring to your attention the fact it is now only 2 lanes on the LTC from the M25 down to just past the A13.

When there is an incident on the M25 and traffic wants to migrate over onto the LTC it will mean 5 lanes of M25 traffic, as that is how many lanes there will be if LTC goes ahead, onto just 2 lanes southbound on the LTC all the way down to just past the A13.

Please have a look at www.thamescrossingactiongroup.com/ltc-bottleneck-m25-a13-junctions/ if you want more info on that!