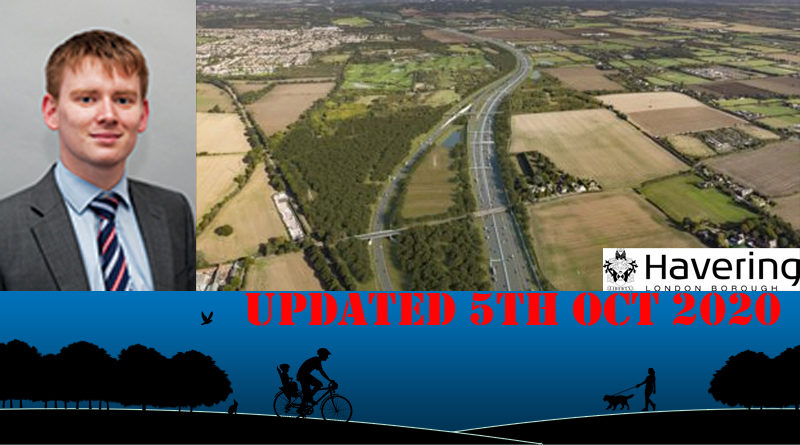 Having previously been in support of the proposed Lower Thames Crossing it seems that after some recent events Havering Council’s concerns over LTC are growing.

Evidently Havering Council Leader Cllr Damian White has been questioning why Highways England have now gone back on their promise of Havering residents benefiting from a local residents discount scheme for the proposed Lower Thames Crossing.

He is on record saying that the crossing would have a significant impact on Havering’s local roads, and that it is important that residents can benefit from some form of concessionary charging rate, in a similar way to other local authorities residents.

There is also mention that the council have concerns over the adequacy of consultation, voicing concerns over the short consulation process and how holding the current consultation now during the COVID crisis is leaving many residents without a voice. In addition stating that it is the council’s view that HE have been more concerned about pushing through the consultations rather than listening to what people have to say. Also the way in which HE have carried out recent consultations is well short of the council’s expectations considering how important the project is.

Cllr White has sent an open letter to the Secretary of State for Transport, Grant Shapps MP, calling for the local Havering discount to be reinstated and for Highways England to re-open the consultation (beyond the design refinement consultation Highways England are currently consulting on) to give local residents a proper chance to have their say on the plans. He states that failure to do this will result in the Council pulling its support for the project.

Havering Council have launched a petition, and are urging everyone across Havering and the South East to sign the petition.

Whilst we support this change in opinion from Havering Council, we have also brought to their attention the fact that the proposed LTC will have far more of an impact on the borough than purely whether they get local residents discount, and the inadequacies of the consultations

We have emailed Havering Council Leader, Cllr Damian White along with the council’s Transport Planner to discuss the matter further.

Read some of the points we raised in our email to them:

We will of course do our best to share details of any response as soon we hear anything back from them.

We have received an email from Leader of Havering Council, Councillor Damian White.  Here is what he had to say to us:

Thank you for your email and please accept my apologies for the delay in replying to you.

The Council is engaging with Highways England on various aspects of the Lower Thames Crossing project as it goes through the Development Consent Order process, and will continue to do so over the coming months, particularly as the scheme enters the pre-examination stage. The Council remains concerned on a number of aspects of the scheme both during the construction period and operation.

I note your comments concerning the way Highways England have carried out consultations, I share these views and as you may be aware, which I have made clear in a letter to the Transport Secretary Grant Shapps. The Council will be reiterating these concerns when invited to make a written representation on the Adequacy of Consultation which we will be invited to make, once a Planning Application has been submitted.

In case you are not aware, Highways England have indicated that they are looking to submit their Planning Application to the Planning Inspectorate (PINS) on or around 23rd October. PINS will then have 28 days in which to decide whether or not to accept the application for examination. During this time, host and neighbouring authorities will have the opportunity to submit a representation on the Adequacy of Consultation. If the Planning Inspectorate decides to accept the application, members of the public, groups, and other organisations – such as local authorities  – will have the opportunity to register as an Interested Party. Matters that remain unresolved with Highways England will be raised by the Council at this stage.

Havering’s response to the Design Refinement Consultation has not been published on the Havering website, however I understand that it, along with all stakeholder consultation responses, will be part of a consultation report that will form part of the Planning Application that Highways England are scheduled to submit to PINS later this month. Since this documentation will be available on the PINS website, there will be an opportunity to review it at this point.

I am aware of concerns around construction vehicles that have been using Church Lane to access a field for ground investigation works. Officers recently met with Highways England and a 5 mph speed limit is to be put in place for vehicles using the road. Signage will also be erected making this speed limit clear. Officers have also requested Highways England to review their traffic management procedures in Ockendon Road as the stop & go signage that has been used by the contractor is not acceptable.

A dedicated email address that members of the public can write to on Lower Thames Crossing matters is being created, and once this has been set up I will send you the details.

Thank you again for taking the time to write to me.

What you can do

If you are a resident of Havering please do contact your local councillors, and your MP too if you wish, share you opinions and concerns about LTC. Whilst we appreciate Havering Council’s points on user charges and inadequacies of consultation, which have resulted in the petition, and  this potential change of their support of LTC, we would also ask that you please do have your say in the official LTC consultation before it ends at 23:59 on 12th August 2020.

We would of course also suggest that anyone else reading this who is not a resident of Havering to consider contacting their own councilors and MPs about LTC too!