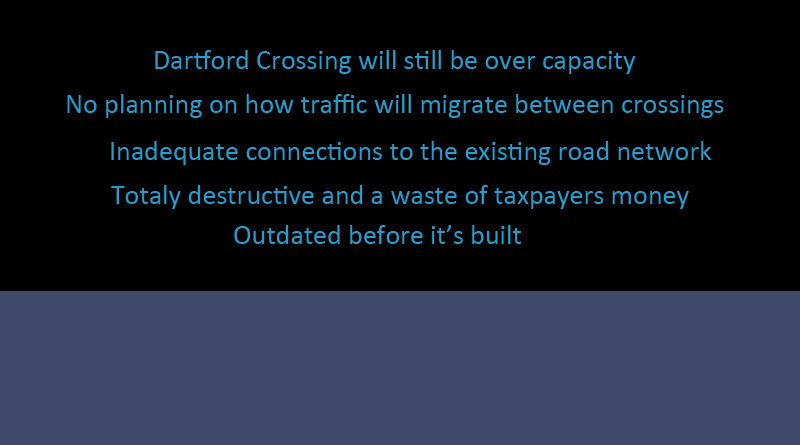 This article has now been updated – https://www.thamescrossingactiongroup.com/ltc-not-fit-for-purpose/

Tim Jones, who was LTC Project Director until he resigned in July 2019, had stated on numerous occassions that it will not solve all the problems we all suffer with due to the Dartford Crossing.  If you missed that you can find out more here – www.thamescrossingactiongroup.com/it-wont-solve-dartford-crossing-issues/.

Therefore if you take each figure that the current crossing is running at now, add the 17%, 23%, or an average of 20%, then take the 22% reduction off this is what you get:

There are not adequate connections in place between the proposed Lower Thames Crossing and the existing road network.  There are various posts on this website that explain, if you wish to learn more please check out some of the links of our Statutory Consultation Posts page.

Also they are not, and do not have to, take into account the tens of thousands of new homes and developments in the region unless they have already been granted planning permission.  This means tens of thousands of homes that form Local Plans in the region are not taken into account, including other developments and infrastructure that is being planned, unless it already has planning permission, which much of it doesn’t.  This includes projects like the huge theme park that London Resorts are planning in Kent.

The fact is the proposed Lower Thames Crossing is simply not fit for purpose.

(2) Ref – 2017 Environmental Impact Assessment – Scoping Report (1.2.5)
1.2.5 – The existing crossing is heavily congested. Average daily two-way traffic flows are typically about 155,000 vehicles, and flows frequently exceed the design capacity of the crossing at peak periods. Forecast traffic growth is expected to result in an increase in traffic volume of 23% by 2025.