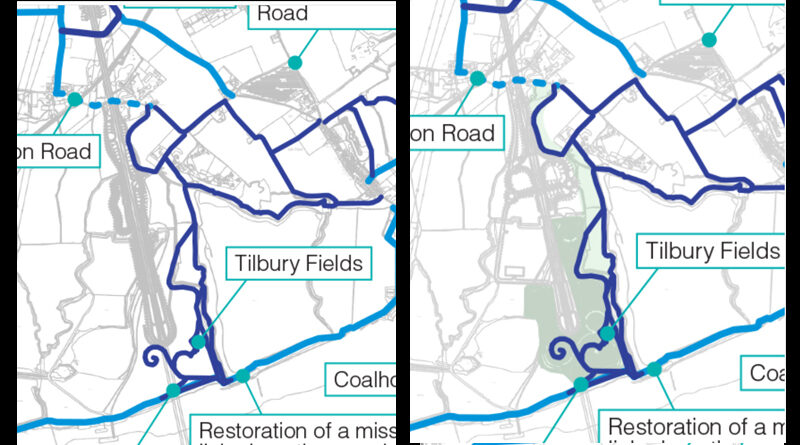 To us it seems the LTC Tilbury Junction is doing the Hokey Cokey, one minute it’s in, then it’s out, and now it appears it may in some way be back in again!

Please note that new information has become available since the original update was published, please click here for the latest info on this

A junction was first put in on the LTC proposals for the Tilbury Link Road.  This was a proviso for the Port of Tilbury supporting LTC Option C.  At one point a Rest and Service Area was added to the junction too.  But after consultation the Rest and Service Area was removed, as was the Tilbury Link Rd. Although both are evidently still being progressed as separate stand alone projects.  With the removal of both, the Tilbury Junction was also removed.

However, when National Highways/LTC released their latest images and info about pathways for walkers, cyclists, and horse riders on the 15th Feb 2022, TCAG were quick to spot additional new detail showing on maps in the area where the Tilbury Junction had previously been proposed. Click the image to enlarge. 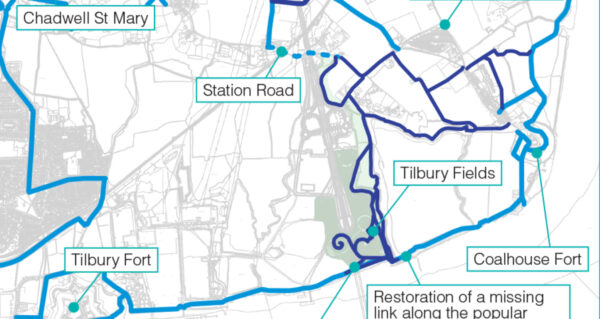 We hadn’t mentioned it at all, but by the 16th Feb 2022 all links to the Thurrock maps for walkers, cyclists and horse riders were taken down on the LTC website page about the pathways. Click the image to enlarge. 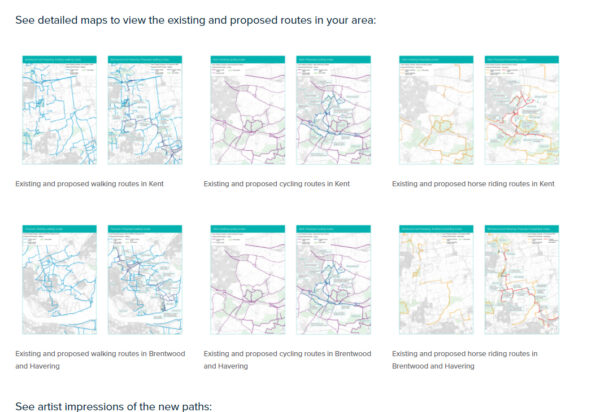 When they were added back to the page later in the day on the 16th, the version of the map had been changed and all signs of the mysterious additions in the area of the previous Tilbury Junction had gone.

We know that there is another round of consultation coming our way, although dates have not yet been confirmed and announced.  We know that in the new consultation we can expect details of new proposals in regard to Tilbury Fields, since that was subject to land conflict issues between LTC and the Thames Freeport future expansion plans.

We learnt at the January LTC Task Force meeting that the upcoming consultation will reveal various details including evidently a new emergency and operations access point in the vicinity of the previous Tilbury Junction, which would also allow future provision for the junction to be reintroduced moving forward.

If you listen from 3 mins 37 seconds into the meeting it is explained about the plans to have provision for the Tilbury Junction to be brought back into the plans, to tie in with the Tilbury Link Road.

Further clarification on what the council’s current understanding of what is being proposed in regard to the Tilbury Junction/Access Point was requested by Councillor Muldowney at around 8 mins 55 sec into the meeting.  We were told that as well as provision for a future junction there would also be the inclusion of operational and emergency access.  It was stressed that it would not provide any initial connectivity to the local road  network, so the general public would not be able to enter or exit the LTC via the proposed access point. It is proposed to be for emergency vehicles to better access the tunnel and provide operational access for when there are incidents.

It is possible, although at the time of the meeting not very clear, the proposed access would be from Station Road.

What could be seen on the now removed maps?

In the map we managed to screen capture before they were removed it appears to be quite a sizable addition with what looks like roundabout style connections. You can get a better idea of the changes by viewing the two versions of the map side by side.  The original map is shown on the right, and the map now being shared to the left.  Click the image to enlarge.

We can only assume that someone put the incorrect version of the map up, and that NH/LTC did not want us to see what they have planned until they launch the upcoming consultation.  We are emailing NH/LTC to ask for clarification, and will share any response as it is received.  In the meantime we felt it only right to share with you what has happened.

NH/LTC have responded to us questioning them about the mystery of the maps changing, their response:

Yes, as you have identified, some of the maps that we released on 15th February were incorrect and we have now replaced these.

They went on to mention that we would be aware there is another round of consultation approaching, so we can only assume that the ‘incorrect’ maps will appear back online at a minute past midnight on the 12th May!