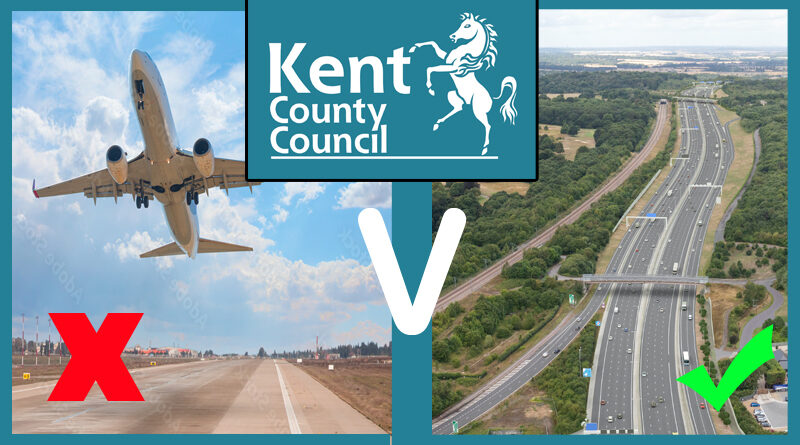 We sent an email to Kent County Council on the 12th December 2021 regarding their position on the proposed LTC.

More specifically our email was addressed to the Leader of Kent County Council – Roger Gough, and Cabinet Member for Highways and Transport – David Brazier.

We read this article that details how Kent County Council had responded to the Gatwick Airport Consultation voicing their opposition.  Since it mentions things like their concerns about negative impacts to communities and the environment we felt we had to ask why they opposed Gatwick Airport plans but support the proposed LTC when it would be hugely destructive and harmful.

On the 11th of Feb we finally got a joint response:

We note the points raised in your letter regarding our position on Gatwick Airport and the Lower Thames Crossing (LTC). The reasons for our position on both are outlined below.

A new LTC has long been a strategic priority for Kent County Council (KCC). Our Local Transport Plan 4 (2016) (which is available to view in full on the following webpage: https://www.kent.gov.uk/__data/assets/pdf_file/0011/72668/Local-transport-plan-4.pdf)  states that “we are clear that a new LTC, to the east of Gravesend, is required to unlock growth, improve journey time reliability, improve network resilience, and enable opportunities for regeneration”. KCC continues to support the LTC on the basis that there has long been a need to relieve congestion at the existing Dartford Crossing, which has been over capacity for many decades and pressure on this part of the network is ever increasing.  Alongside our support for the new LTC, we also work closely with National Highways to mitigate the adverse impacts of the scheme.

Furthermore, we also see the LTC as forming part of a wider programme of strategic network improvements across the County. Delivering an additional crossing of the Thames is the first stage, assuming that further funding from government comes in the future, to enable the ‘bifurcation’ or splitting of port traffic between the two motorway corridors. This will alleviate pressure on the M20/A20 and make the M2/A2 more suitable for freight travelling to the Port of Dover.

In comparison, we do not foresee Gatwick’s Northern Runway proposals resolving any of the negative impacts of overflight on Kent’s communities. Furthermore, there is no evidence to suggest that growth at Gatwick will have economic benefits for Kent that are comparable to those that will be created by the new Lower Thames Crossing.

KCC has a long standing policy on Gatwick Airport (which is available to view in full on the following webpage: https://www.kent.gov.uk/__data/assets/pdf_file/0011/72668/Local-transport-plan-4.pdf) which was adopted in 2014 and outlines our rationale for opposing growth at Gatwick. Whilst at the time, this was in the context of the Airports Commission and the proposals for a newly constructed and independently operated second runway, we consider these latest proposals to routinely use the northern runway as a way for Gatwick to become a two-runway airport by another means.

I hope that helps to provide you with some clarification on our position on these two issues.

We have now replied pointing out the data that shows the Dartford Crossing would still be over capacity.  Also that NH are not planning how traffic would migrate when there is an incident, if the LTC goes ahead, and that there would not be adequate connections.  We specifically asked how they think the road network would cope if the Dartford Tunnels are closed and all the traffic heads coastbound on the A2 to reach the LTC, and there being only 1 single lane from the A2 onto the LTC!

In response to them saying they are working closely with NH in regard to mitigation of the adverse impacts, we asked how they propose mitigating over 5 million tonnes of carbon emissions, the loss of ancient woodland, greenbelt, and agricultural land (inc grade 1 listed land).

We asked for their comments on the possibility of rail upgrade between Ashford and Reading that is said to negate the need for the LTC.  Also pointing out that we believe it to be a false economy that things like the Blue Bell Hill Improvements which would be needed as a direct result of the LTC are not being included in the cost of LTC, and therefore a false economy and in our opinion manipulation of the cost benefit ratio for the project.

We closed by stating that we can understand and appreciate their opposition of the Gatwick Airport expansion plans because the negative impacts on local communities and the environment would be intolerable, as stated in the original article by Mr Brazier.  But state that we find it confusing that they cannot also see the huge negative impacts the proposed LTC would have on local communities and the environment, which would be completely intolerable also.

We note your further comments and in respect of the Lower Thames Crossing (LTC), we understand that National Highways have assessed the impact on the network should there be an incident at either the existing Dartford Crossing or the LTC that would require one or the other to be closed. Kent County Council (KCC) has also regularly been involved in meetings with National Highways and the relevant emergency services to plan for such an incident should it happen on the network.

In response to the LTC’s impact on the wider road network, specifically the A229 Bluebell Hill, we are working with National Highways and the Department for Transport (DfT) to obtain Large Local Major (LLM) scheme funding to deliver much needed improvements.

KCC has long been supportive of rail enhancements between Ashford/Canterbury to Gatwick, as referenced in our Kent Rail Strategy, which could also form part of a wider outer orbital route to Reading. These enhancements are vital to ensuring Kent’s residents have the opportunity to travel sustainably to and from Gatwick Airport and other areas of the UK, without being reliant on travelling into London and back out again. These upgrades are also a priority for Transport for the South East (TFSE) and will form part of their Strategic Investment Plan which is due to be consulted on in Summer 2022.

As for the health impacts of the LTC, a full Health Impact Assessment is being undertaken by National Highways and will form part of their Development Consent Order (DCO) application put forward to the Planning Inspectorate later this year. This assessment will identify any potential health impacts as a result of the scheme and outline the ways in which National Highways plan to mitigate these impacts.

Whilst there will inevitably be impacts on both the environment and local communities, National Highways as the applicant will be required to mitigate these, including the carbon impacts, loss of ancient woodland and agricultural land as stated in your letter, in order for the project to be deemed acceptable in planning terms. The LTC has the potential to generate a range of benefits around journey time reliability, the creation of a new freight corridor and air quality improvements in Dartford.

We continue to work closely with National Highways to understand the adverse impacts and suggest suitable mitigation measures but ultimately it is down to National Highways as the applicant to define the measures which they deem appropriate to mitigate the impacts of their scheme. All impacts and proposed mitigation measures will be reviewed and assessed in full by the Planning Inspectorate throughout the DCO process and the Inspector will then decide whether to recommend to the Secretary of State that development consent is granted on the basis of the scheme proposals being satisfactory.

Thank you for writing to us with your comments, which we have noted and will be taken into consideration through the formal DCO process.

Further reaction from us

Any time we have asked National Highways/LTC about how traffic would migrate between the two crossings when there are incidents they have told us they are not and do not have to take this into account, as road standards and guidelines do not require such measures to be considered/taken.

We are please that Kent County Council are supportive of rail improvements, so long as they are carried out in a way that does not negatively impact other communities and the environment/biodiversity.

In regard to the Health Impact Assessment, this is not something we should have to wait until DCO stage, it is something that everyone needs and deserves to have access to during the consultation stage.  How can we provide meaningful response if they are not providing us with adequate information to read and assess the impacts to our health?

It is frustrating that people still believe that the problems, both congestion and pollution, will be resolved by the proposed LTC, when National Highways data proves that it would still be over capacity and suffering with the same problems as now.  Don’t we all deserve better, especially at a cost of £8.2bn along with the cost to the environment, and our lives, health and well-being?