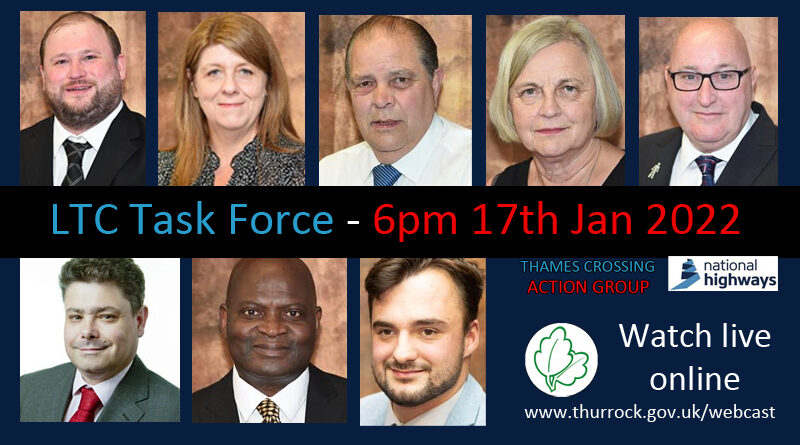 The January 2022 LTC Task Force meeting took part on Mon 17th January.  TCAG’s Chair Laura was in virtual attendance.  This meeting was not webcast live due to the change of venue because of the flooding/electrical issues at the council offices.

However, the meeting is now available to watch online, and our update covers some of the highlights.  It is hoped and expected that the meeting will return to the council offices next month, due to the anticipated opening of the new council chambers/offices.  If that happens live webcast of the meeting should also resume.

The Council have been in discussions with the various ports that make up the Thames Freeport. In particular they have been discussing the impacts the proposed LTC would have on the Stanford junction on the A13 and Manorway traffic with DPWorld.  Also the possible alignment of the Tilbury Link Road with the Port of Tilbury.  Remember the Tilbury Link Road is still being progressed as a separate stand alone project to the LTC.

Another round of consultation

You may remember we mentioned after the December LTC Task Force meeting that there would be further round of LTC consultation coming our way.  The big news to come out of the meeting is that National Highways have advised the council that they are preparing to hold the next round of consultation, which will be the Local Refinement Consultation starting at 00:01 on Thurs 24th March 2022.  It will run for 4 weeks until 23:59 on Friday 22nd April 2022.

We quickly raised the fact that this period is in purdah (the period of time immediately before elections or referendums when specific restrictions on communications activity are in place) for the upcoming Thurrock local elections, and that National Highways have always avoided that period before.  Officers advised that they too had this concern and are looking into it, and raising it with NH.  We have since checked online and our initial findings are that Havering will also have elections this year, so would also be in purdah.

After the meeting we also realised that the proposed consultation period also clashes with the Easter Holidays, and the 2 week school holidays. So 2 out of the 4 weeks of consultation will be during holidays.  This obviously affects all areas.

The consultation will evidently cover the new area being proposed for Tilbury Fields to replace the land lost in the land conflict area.  Also proposed changes to the A13/LTC junction. As well as what they are referring to as an operations and emergency access, which will allow connections to the LTC from the local road network for LTC operations workers and emergency vehicle access in a similar vicinity to where the Tilbury junction was originally proposed.  Plus changes to provision for walking, cycling and horse-riding, including a new bridge over the A127, new links, and proposed changes to public rights of way.

There could also be other topics, but those are ones we have been made aware of at this stage and obviously as yet National Highways have only been in correspondence with Local Authorities on this, and have not yet made a public announcement.

We were also updated that NH are producing new traffic modelling data that is supposed to be completed by mid March, which means it is highly unlikely that this important information will be included in the consultation, as consultation documentation will need to be prepared and printed ready for the start of the consultation.

We were also reminded that the new air and noise pollution data is not due to be completed prior to the consultation, so again that would not be part of the consultation.  Plus there is the fact that Government have agreed to set 2 new legal levels for air pollution by the end of Oct 2022, which could also be very relevant to the proposed LTC.

We asked if NH had shown any indication that there could be further rounds of consultation.  We were told they had indicated that they would be holding the Local Refinement Consultation, and then moving forward towards resubmitting the Development Consent Order (DCO), no other consultations.

Seems to us like NH are just trying to complete a tick box exercise with this new consultation, rather than actually providing us with a full and adequate consultation, and that they are trying to push it through during purdah and Easter holidays.

What can we do?

Email your local authority, council, and MP – details on how to contact them below if needed
Please email your councillor and also your MP and copy your local authority into the email to share your opinion and concerns on these matters about the timing and inadequacies of the proposed consultation too.

No further update on the Health Impact Assessment at this time. Although it was agreed that a copy of the Health and Equalities Impact Assessment that was made available to Local Authorities as part of the DCO first attempt in Oct 2020 could be shared with members.  A copy of which will be distributed to all Task Force members on the understanding that it is subject to change.

Laura also updated the other committee members about TCAGs call for the Government to pause LTC in light of the latest news that they are pausing Smart Motorway rollout until 5 years of safety data is collected and analysed.  Highlighting the fact that the proposed LTC would by National Highways own admission be designed to Smart Motorway standards, despite the fact that technically they are always stating it would be an all-purpose trunk road. Read more about this here.

Your Local MP Click here if you are unsure who your MP is, or are in a different area to those listed below