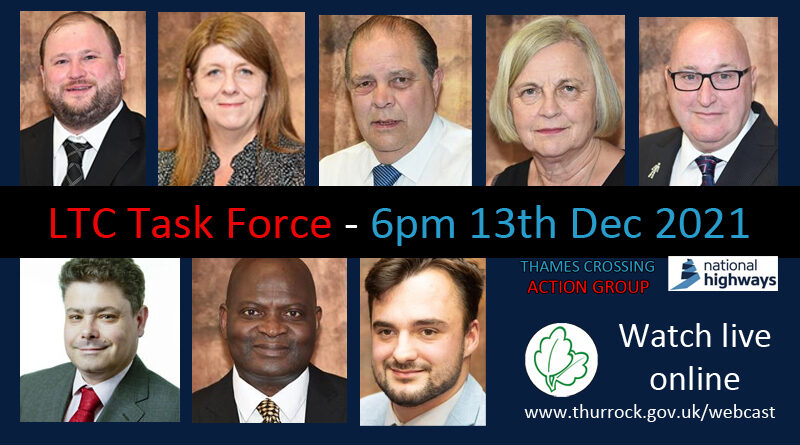 The December 2021 LTC Task Force meeting took part on Mon 13th December.  This meeting was not webcast live due to the change of venue because of the flooding/electrical issues at the council offices.

The meeting is now available to watch online, and our update covers some of the highlights.

Items from the October 2021 LTC Task Force, which was postponed as a mark of respect following the tragic death of Sir David Amess MP, were heard first.  Followed by November agenda items, including guest Chris Todd, Director of Transport Action Network, as the Nov meeting was adjourned due to attendance issues.

As each section of the meeting was recorded individually to correspond with each months meeting where the previous meetings had been postponed, we have linked to each section below next to the relevant month.

NB. it was announced at the meeting that there are some corrections to be made in regard to the version of the report shared.  Firstly, that in the table on page 4 it should state 6 new support posts, and also on page 6 of the report, and not 9 as incorrectly typed in both instances.  Also there has been a slight amendment in regard to the associated cost of £450k, there is an addition of “(cost includes both salaries and comprehensive events and training programme)”

This report has been prepared for the council by Stantec and is a review of the LTC Skills, Education and Employment Strategy (SEE Strategy) that has been produced in draft by Highways England.

The SEE strategy is important to the council as the document provides the policy context for a number of specific measures/requests that Thurrock Council have made to LTC via the Hatch report (published Feb 2021) (or the council’s mitigation wish list as we often refer to it as!)

The points from the Hatch report that this update particularly reference are:

The general consensus is that there is not enough urgency in the pace from NH/LTC, and that the targets set in the report are not ambitious enough.  An example given was that out of the 22,000 jobs NH/LTC comment on relation to LTC, there is a target of only 437 apprenticeships.  It was also mentioned that the SEE document lacks any definition of the term ‘local’.

Thurrock Council have asked for more ambitious targets, some kind of legal securing of targets within the DCO process, and more funding for the community grant scheme.

Since the report was shared in Oct evidently NH/LTC have agreed to secure targets in S106 document as part of the DCO process. But the council would prefer to see the SEE document secured in a separate control document, as the proposed S106 option from NH would be long and complicated.

A very short verbal update on this as despite council representatives attending some very long meetings with NH about this there has been no further developments, so nothing to report.

We were told that as far as the DCO application being resubmitted there was no further detail on when that may happen as NH are only stating it will be in 2022.

However, it was disclosed that due to significant changes in regard to the land conflict issues, in the Tilbury Fields area, along with changes to the A13 junctions a further round of consultation would be happening.  Evidently NH are suggesting the consultation may happen possibly around February, but the council feel that may not be realistic and it could be later.  One point that was commented on that highlights the potential for further delay is the fact a consultation should really provide an update on the responses to the last consultation, which would likely take some time to prepare.  The question again will obviously be whether NH try to push through another inadequate consultation as quickly as possible or not.  Obviously they would also need to take the purdah period for local elections into account when planning the further round of consultation.

Cllr Fraser Massey requested that an update on the changes to the A13/Orsett Cock junction be added to the work programme for early next year – this was agreed.  From the brief mention officers gave it, it sounds like some significant changes are being proposed.

It’s not secret that we support Transport Action Network‘s work and legal challenges, so we are delighted that TAN Director, Chris Todd has been invited to speak at LTC Task Force.

Chris gave an update highlighting the basis of their legal challenge, and explaining that they hope to receive progress updates on them in the near future.  We will of course share those updates as they are informed of them.  He also spoke of the impacts of carbon emissions, and also air and noise pollution of the LTC, and updates to be aware of those fronts.

Council officer, Colin Black clarified that the council have raised and are in ongoing discussions with NH on all the aspects that Chris Todd mentioned, but that to date NH have failed to provide the requested info that the council are seeking in regard to these issues.

Cllr Fraser Massey asked for an update on the Freeport’s changing impacts to LTC to be given in the January 2022 meeting – this was agreed.

One thing to come out of the meeting was that in regards to measure L18, there is a paper being prepared in regard to East Tilbury Landfill site as it appears there is the possibility of it being granted SSSI status.  That is a Site of Special Scientific Interest due to there being nationally significant creatures on the site.  This is very interesting, especially due to the Tilbury Fields land conflict issue, and NH/LTC’s need to find alternative land to make up for the loss of the conflicting land.  We await the details of the paper that is being prepared and learning more about the site and potential SSSI status.

Also in regard to measure L21 it was clarified that there has been no clear definition as to exactly what a Low Carbon Hub would be, and that the council have asked for more info.  It was also confirmed that TEGB refers to Thames Estuary Growth Board.

We have submitted other questions and comments in regard to the Hatch Report that we are hoping to receive further responses to in due course and we will share as we get anything new to report.