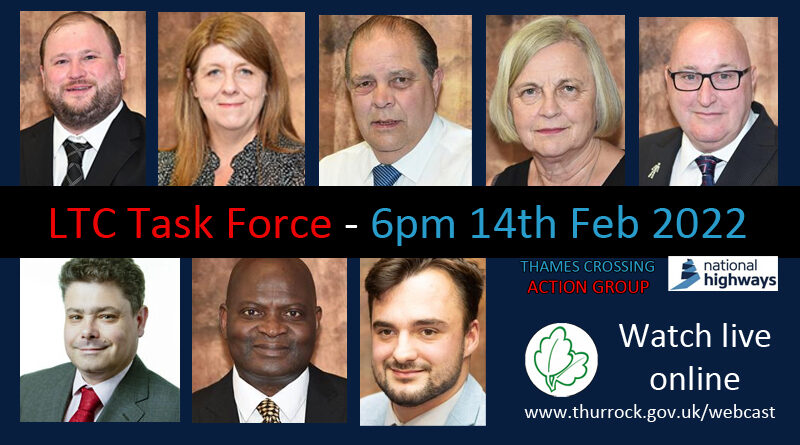 The February 2022 LTC Task Force meeting took part on Mon 14th February.  TCAG’s Chair Laura was in virtual attendance.  This meeting was not webcast live due to the change of venue because of the flooding/electrical issues at the council offices.

However, the meeting is now available to watch online, and our update covers some of the highlights.  Live webcast of the meetings should resume as soon as council meetings are back in the council offices, after all the flood/electrical issues and the new offices are complete and operational.

A while ago LTC Task Force members asked for a briefing on National Highways Compensation Policy in regard to the proposed LTC, the February meeting sees that item on the agenda.

You can view the note for this briefing on Thurrock Council’s website as part of the LTC Task Force meeting Agenda pack.

We were given a summary of the note, with basic detail of each of the three potential types of compensation that could be relevant in regard to LTC compensation for those not within the development boundary.

We remind those that may feel like they are or could be impacted by the proposed LTC that Thames Crossing Action Group are not qualified to give legal advice on the matter. We have shared some info that has been provided to us on ways you may be able to seek further info and assistance, which you can read on our website here.

It will sadly not come as a surprise to many that unfortunately at this time there is no further update on the Health Impact Assessment from National Highways/LTC.  This important topic will remain on the Task Force agenda until such time as further update is available.

There was brief mention of a few other topics before the meeting closed.

We were advised that there is no further update about the proposed new LTC consultation (which we had been advised of in previous meetings), but that the deadline for local authorities to respond to the draft Statement of Community Consultation (SoCC) was Feb 14th, so the council expected to be provided some kind of update by National Highways/LTC in the near future and would update us accordingly.

It was also agreed that the council’s communications in regard to the proposed LTC be a future topic for discussion and update, and was added to the LTC Task Force Work Programme.