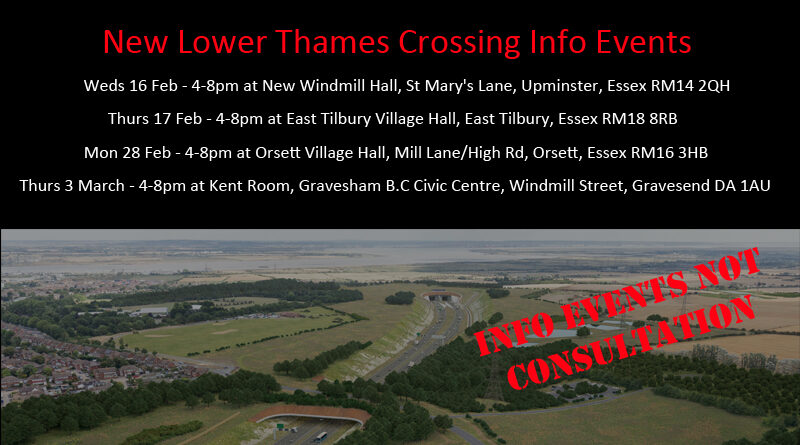 We learnt yesterday (1 Feb 2022) from Local Authorities, that new LTC info events are planned in Feb/March 2022.  We literally have just received the same detail from National Highways/LTC as we were about to hit publish on this update!

In the email details are provided that National Highways/LTC plan to hold 4 drop-in events in the next few weeks where residents can find out the latest project updates and ask them questions.

They go on to say that at the drop-in events they will be providing info on their proposed new walkers, cyclists, and horse rider routes as well as keeping people updated on how they are working with local schools and businesses to create opportunities for new jobs and skills.

TCAG are not convinced of the ‘opportunities’ that they talk of, and seriously question the use of things like Minecraft games in local schools to promote the LTC.  We encourage those who have concerns about National Highways/LTC having input into their child’s schooling to please contact your school to voice your concerns.  TCAG have previously attempted to contact local school about LTC issues, but the schools need to hear from parents with children at the schools!

They make it very clear in the email that these are NOT consultation events.  But go on to confirm that they are drawing up plans and engaging with host local authorities in regard to the next round of LTC consultation, and will release further details in due course.

When are the info events ?

The first two events are being held during the half term holidays, so people could be away.

Plus the events are between 4-8pm, so the timing of those not held in school holidays will be at times that many will be collecting their children from school, overseeing homework, dinner time, and putting younger children to bed.

When you consider one of the ‘aims’ of the info events is to update people on NH/LTC work with schools they’re not making it easy for those with school age children to attend to find out more!

Plus the events are being held at the same time as Thurrock Council’s Local Plan Consultation, so residents have enough on focusing on that at the moment.

More info NH have told us about the events

There are 4 stands at the events consisting of teams that are covering:

The videos that were shown at the events can evidently be found in the LTC playlist on NH YouTube Channel.

We will be contacting National Highways/LTC to voice our concerns over these info events.

The timings, the locations.  Also if these are supposed to be a general info events to update locals about LTC why is it limited to just 4 locations?

We also feel it will add to confusion, since it may technically not be a consultation, public perception of consultations is when there are events to get info and ask questions, plus the events are demanding of their time and attention regardless of what you call them!

We also know that whilst still not confirmed NH/LTC have sent Local Authorities a draft Statement of Community Consultation which proposes a 4 week consultation between 24th March and 22nd April.  We have previously commented on our concerns of this being during purdah, Easter Holiday etc.  We still have to wait and see whether NH/LTC decide to push ahead with these plans or whether they will amend their plans.  However to have these info events that may possibly be so close to another round of consultation could prove misleading and confusing to some.

We are also aware that the proposed consultation that is currently being discussed would not include important aspects such as updated traffic data, or new air and noise pollution survey results since they are still collecting the associated data.  Plus there is the consultation fatigue aspect to take into account, as lots of different events just add to the issue.

We feel National Highways/LTC need to stop bombarding people with bits of useless info, and instead should concentrate on preparing an adequate and accessible consultation much later in the year, and ensure it is held at a time that doesn’t clash with purdah, holidays, council Local Plan Consultation, and other local important issues.

Cost of these events

Out of interest we decided to ask NH how much these events cost. Particularly interesting when initially they were proposing to have these events that ran until 3rd of March, and then would have been going pretty much straight into a consultation (end of March), had they not had to postpone the consultation due to feedback from Local Authorities and others voicing concerns that it would be held during pre-election purdah period (Thurrock and Havering), as well as Easter holidays, and the fact it was only 4 weeks long.  The Local Refinement Consultation will now be running from 12th May through to 20th June 2022.

Anyway back to the cost of these 4 info events.  NH have told us that the total cost of the four events was £15,634.50 (£3,908.63 per event) which includes associated event planning, production and management, venue costs, materials and equipment.

Reports from those who attended said the events were PR propaganda events, and that many did not manage to get answers to their questions, instead being told they would have to wait for the consultation to find out more.  We’ll leave you to decide if you think that’s taxpayers money well spent!