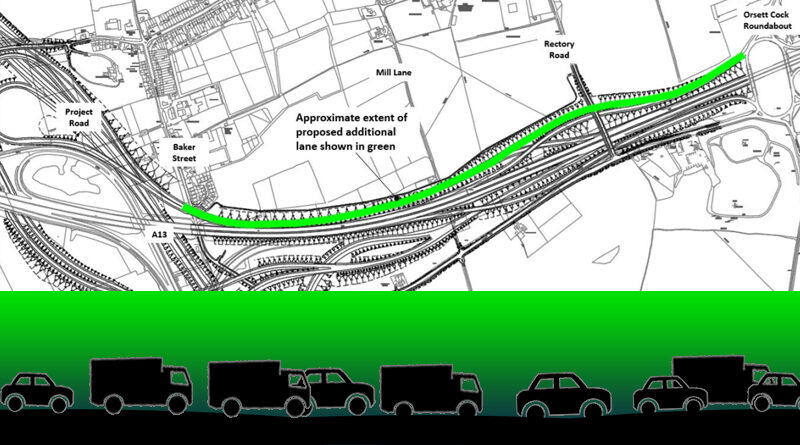 As part of the Community Impacts Consultation Highways England have announced their plans for the widening of the LTC to A13 (Orsett Cock) slip road section of the proposed Lower Thames Crossing.

We first learnt of this during the July LTC Task Force meeting, when it was highlighted as one of the changes in this consultation.

Now that we’ve had a chance to review the consultation materials further, we thought we’d bring you this update.

We understand that it's a bit confusing trying to get your head around where all the slip roads go. We've popped this together quickly to try and help give you a quick insight and better understanding of which slip road goes where. We hope it helps 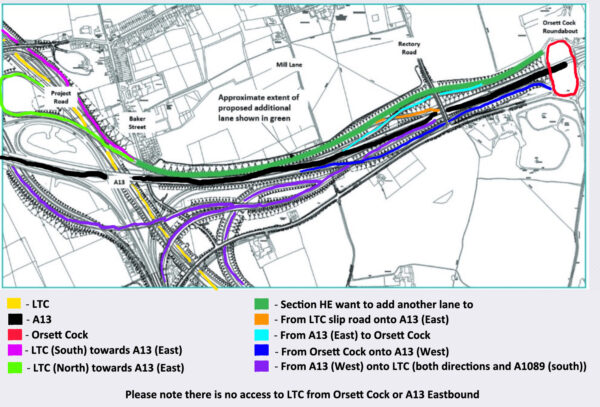 The area marked in green in the map below indicates the section HE are proposing to widen the slip road section by one lane.  This slip road would be traffic coming off the LTC (from either the North or the South) which would be joining the A13 Eastbound or going onto the Orsett Cock roundabout. (Click image to enlarge) 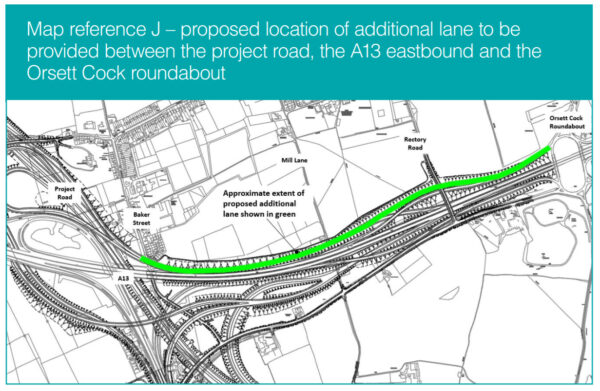 Highways England briefly mention this on page 20 in the Community Impacts Consultation Guide.  It is also tucked away in the Orsett section of the Ward Impacts Summary, North of the River Part 1 where it is mentioned in passing on page 332.  However, you have to dig deeper to find the above map, and any kind of attempt of real detail, which we found in the Operations Update on pages 66, 67, 69, and 70.

So what’s it all about?

Highways England state that they have updated their traffic modelling to reflect the later estimated open year of LTC (if they get permission), and are using modelling for an estimated 2029 opening of LTC.

They say that due to the later opening and the latest development proposals for the new Thames Freeport there is predicted to be an increase in traffic, which they say warrants the need for another lane in the slip roads in this section between the LTC and the A13 and Orsett Cock.

HE say that there are no changes to the amount of land they propose to take  in this area. They state that the additional lane would increase the width of the carriageway, resulting in the edge of the road being located slightly (less than 4 metres) further north than previously proposed.  The highway boundary will not change.

They go on to say that “because of the increase in capacity, the traffic would flow more freely through this section. HE state that the levels of congestion along this link would therefore reduce from that set out in our traffic modelling results in chapter 4 of the Operations update. The noise and air quality impacts across the area, including Baker Street, would be the same as those set out in chapter 5 of the Operations update. The visual, air quality and noise impacts would be the same as set out in the Orsett ward summary. The proposed noise barrier located along this length of road will provide noise mitigation for those living on Baker Street.”

Yes we agree that this doesn’t really tell us anything, and if you start looking at Chapters 4 and 5 it just leads to yet more questions sadly.

It won’t surprise you to read that we have questions on all of this and more!

So most of it would become 3 lanes instead of 2, and this is supposed to be because of predicted increase in traffic, despite the fact that the main LTC southbound between the M25 until just past the A13 is only 2 lanes of traffic.  Admittedly this slip road section does take traffic from both LTC southbound and northbound, but if the main road only needs 2 lanes why on earth do they need 3 lanes for a slip road?

We have submitted the following questions to HE/LTC and will share any responses/answers we get as we receive them, so watch this space!

This change is, we consider, quite relevant yet hidden away as outlined above.  Very vague mentions in the consultation guide and even ward impact summary.

If you check the interactive map in this area there is a text box describing what they are proposing, but it points to the wrong location!  It actually points to the A13 to LTC (Northbound) slip road, not the LTC to A13/Orsett Cock slip road.(Click on image to enlarge) 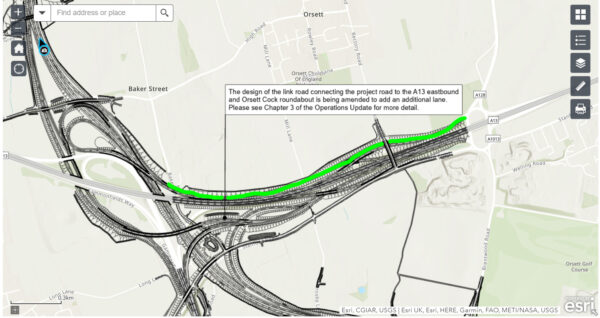 And if you check the Map Books, visualisations, or the route flythrough they haven’t event bothered to update those either for this consultation to reflect the extra lane.  HE admit:

“We are currently working to include this revised link in our updated application materials, and therefore this widening of the proposed road is not currently represented in the relevant map books, visualisations or the route flythrough, although we have indicated the location of this change within those documents. – Highways England”

We consider this to not only be an inadequacy, but also complete disrespectful.

On the Map Books the same text box as is displayed on the interactive map has been added.  But it doesn’t point to a location (not even the wrong location!), instead it is tucked away in strange locations.  And the printed maps you will get in the consultation pack if you order/get one, don’t even bother to try and spot it on the General Arrangements maps, unless you have a magnifying glass, it’s so tiny you’ll very likely miss it unless you are specifically hunting for it!

We have tried to list locations you will find references to this extra slip road lane within the Community Impacts Consultation materials.

Page 20 in the Community Impacts Consultation Guide – a brief mention.

At the very top of page 332 in the Ward Impacts Summary, North of the river Part 1 –  it is mentioned in passing.