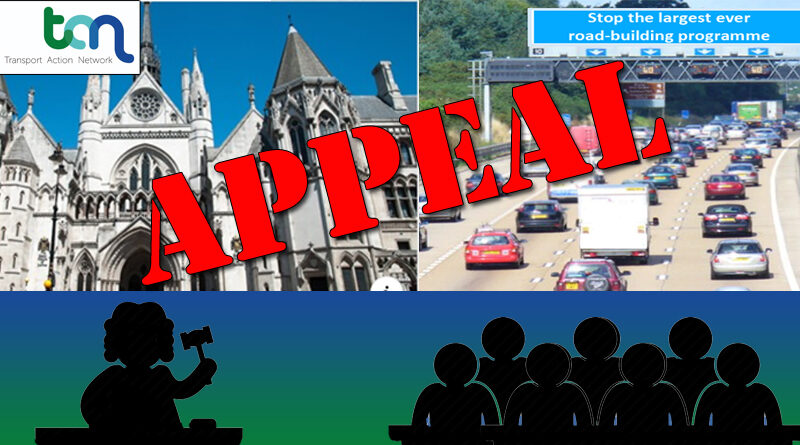 Mr Justice Holgate, has today (26th July 2021) handed down his judgement on Transport Action Network’s first legal challenge, and has found against TAN.  They have already asked for permission to appeal.

Transport Action Network is shocked by today’s High Court ruling that the Secretary of State for Transport did not need to provide evidence to show he had considered the impact of the “largest ever” roads programme on climate targets.

To be clear this was a judicial review of whether the Secretary of State for Transport has made the decision to approve the “largest ever” roads programme, which includes the proposed Lower Thames Crossing, legally.

It was not about assessing whether the roads programme is a good idea, purely if the decision to approve it was made legally.

In March 2020, Grant Shapps approved the £27 billion second Road Investment Strategy (RIS2), including over 4,000 miles of additional road capacity. Two weeks later he acknowledged that “we need to use our cars less” to tackle the climate emergency.

On the first day of the judicial review in June, government lawyers conceded that the minister, when approving RIS2, only had a briefing simply asserting it was “consistent” with the net zero by 2050 climate target.

Despite tilting the scales so heavily against TAN and the DfT filing hundreds of pages of evidence, the judge was still unable to find the proof required to rule ministers had acted lawfully. So he was forced to speculate heavily, making many assumptions that “the defendant must have been aware” of, or about what “[i]t is reasonable to infer”.

To sum up, Mr Justice Holgate has today ruled that the “briefing, albeit laconic, was a legally adequate precis”, holding that “on matters of political and economic judgment a claimant for judicial review bears a heavy evidential onus to establish that a decision was irrational, absent bad faith or manifest absurdity”.  He concluded “that the government is taking a range of steps to tackle the need for urgency in addressing carbon production in the transport sector. Whether they are enough is not a matter for the Court”.

Laconic – using or involving the use of a minimum of words : concise to the point of seeming rude or mysterious (merriam-webster definition)

We are obviously very disappointed and frustrated by today’s announcement, but we most definitely appreciate and send huge thanks to Chris and Becca at Transport Action Network and the entire legal team for all their hard work.

When you consider that Carbon Net Zero is enshrined in UK law, and we are living in a time of climate emergency where we need to be aware and acting now, it is ludicrous that the Secretary of State has failed to carry out proper due diligence on the real impacts of such a hugely destructive roads programme before deciding to approve it. It’s about time that our Government stepped up and started to back up all the talk with some actions now.  The world’s eyes will be on us as the UK hosts COP26 in Glasgow later this year.  But whether the world is watching or not we need our Government to finally start to step up and put their money where their mouth is on climate emergency, instead of putting money into hugely destructive and harmful road programmes like RIS2 and the LTC.

We continue to support TAN and their legal challenges, including their appeal on todays decision.

The fight continues on all levels! Together we are stronger!

If you can please donate to TAN’s appeal – https://www.crowdjustice.com/case/stop-largest-ever-roads-programme/

TANs  press release on the judgement being handed down – click here