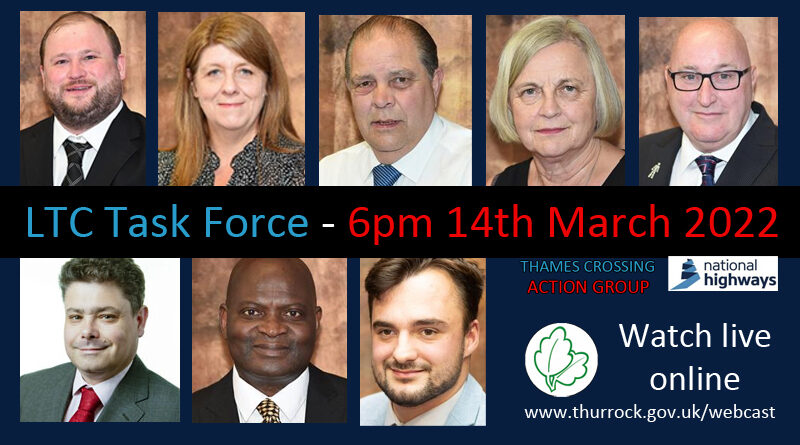 The March 2022 LTC Task Force meeting took part on Mon 14th March.  TCAG’s Chair Laura was in virtual attendance.  This meeting was not webcast live due to the change of venue because of the flooding/electrical issues at the council offices.

However, the meeting was recorded and has been shared on the council’s YouTube channel (we’ve embedded a copy below), and our update covers some of the highlights.  Live webcast of the meetings should resume as soon as council meetings are back in the new council offices.

The presentation that accompanied this update can be viewed below.

One point raised in our email and to be clear of if you’re looking at the presentation/recording of the meeting, is that everything covered is during normal operations of the proposed LTC, if it goes ahead, it does not include what would happen when there are incidents, which would be absolute chaos.

Thurrock Council have expressed that they have concerns not only about the areas featured in this presentation, but throughout the borough.  Also a lot of the data in the presentation is National Highways data, and the council are also questioning that too.

They have requested access to the traffic model so they can review it themselves, as currently they have to submit scenarios to NH and then wait a considerable time for data to be sent back.  Evidently Essex County Council are also keen to gain access to the traffic model too, due to their own concerns about the impacts of LTC on the existing road network, if it goes ahead.

It is also apparent that traffic models have their limitations, and do not reflect certain aspects such as incidents, rat running etc.  Neither does it include estimated traffic from the proposed London Resort theme park.

The data the council currently have access to was provided to them in 2021, and they expect for updated info in March and April.

The mention of 50% increase in river crossings in the presentation is due to induced demand.  This is traffic that will start making new crossings that they wouldn’t normally make because of a new road.  It may be that initially traffic flows a bit better so where they might not usually have made a journey, now they decided to do so.  Or that the new route makes a journey ‘shorter’ or ‘quicker’, but of course all of that then results in more traffic and the congestion gets even worse again.

There are concerns about all the extra traffic and associated congestion and pollution, as well as impacts to the existing road network and communities.

During construction they expect places like Orsett, Horndon, Chadwell St Mary, and Corringham to experience a lot of rat running traffic.

National Highways will release details of changes to the LTC/A13 junction that will include a new access to the A1089 via the Orsett Cock.  We believe it will be a slip road to the A1089 (South) via the slip road from the Orsett Cock roundabout onto the A13 westbound (heading towards London). We’ll be able to share more on this once consultation materials are released.

Back to the report, it covered predictions that the Orsett Cock roundabout and surrounding area would see a large increase in traffic, estimated to be +15% in the a.m. peak hour and +24% in the p.m. peak hour.

Also that the Stanford junction and Manorway would see an increase in traffic too, as well as the B1420/Southend Road, which is anticipated would be used as a rat run when the A13 westbound becomes busy due to LTC impacts.

We did point out in the meeting too that when considering peak hour traffic, it needs to be taken into account the ports etc to the south of both Manorway and the A1089 all work to shift patterns, which may not sync with the general peak hour traffic, so in reality peak hour traffic may be at different and/or additional times rather than just the standard a.m. and p.m. peaks.

It was highlighted that there have been similar local network impact/issues raised on another road project, the Black Cat scheme in Cambridgeshire/Bedfordshire area, so that is being watched closely to see how it develops.

In general the consensus was that the LTC plans would use and negatively impact the local existing road network, and it is questioned as to whether this is an attempt to keep costs of the LTC project down.  We also made the point that all these issues just go to show again how the proposed LTC is the wrong crossing in the wrong location.

During the meeting we were advised that National Highways had not issued any update in regard to the upcoming consultation.  You may remember that all the impacted Local Authorities had objected to the proposed dates of a new consultation between March and April as they clashed with the pre-election purdah period (Thurrock and Havering), and Easter, as well as only being 4 weeks duration.

Cllr Gary Byrne commented as the person responsible for booking Homesteads Hall in Stanford, saying he had been advised by National Highways that they needed to cancel the original booking date, and were seeking a new booking for the hall in May/June.

It was only one day later, on Tues 15th March that National Highways announced the new consultation dates as being 12th May to 20th June.

It will sadly come as no surprise to many that unfortunately at this time there is no further update on the Health Impact Assessment from National Highways/LTC.  This important topic will remain on the Task Force agenda until such time as further update is available.

Laura gave a brief update to the other Task Force committee members on TCAG having submitted an evidence report to back up our claims and call for the LTC to be paused in line with the pause on ‘Smart’ Motorways.

And also shared that TCAG had written to Secretary of State for Transport, Grant Shapps MP to call on him to re-open and review the governments £24bn road plan (RIS2) that includes the proposed LTC. Also highlighting that National Highways own Annual Report (2021) considers the failure to progress the proposed LTC as an “extreme” and “likely” risk, and even “existential threat” to National Highways itself.